The Battle Down Under 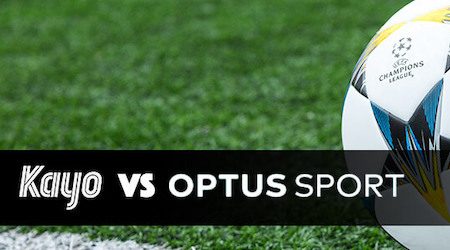 With COVID-19 exposing the vulnerability of pureplay sport streaming services, the importance of building out a robust and downturn-proof offering is fundamental to the viability of these currently additive services.

It is not only rights holders innovating to get live sports back on the field. Streaming services with their current dormant offerings, are looking for short-term fixes to engage with sports-starved fans, which is paramount to navigating these exceptional circumstances we are confronted with.

The competition for displacing the incumbent traditional pay-TV operators has intensified in Australia, with streaming insurgents vying to become substitutive services with increasingly compelling propositions. The issue for the sport-centric offerings during COVID-19 is that they have little of meaningful value to offer consumers, due to the indefinite shelving of all live sports, forcing the need to innovate and create digital engagement.

In Australia, Kayo Sports and Optus Sport are the leading pureplay sport streaming services (outside of franchise-owned direct-to-consumer (D2C) propositions); however the pandemic is likely to have hit this specific genre of service hardest. In terms of weekly-active-usage (WAU) penetration, these services trailed streaming incumbent Netflix by a multiple of 20 respectively in Q4 2019 (source: MIDiA Research). Even Amazon Prime Video, perhaps sports streaming services’ biggest future threat, had a WAU penetration of more than double both these services in Q4 2019.

This is significant considering Amazon came to market in Australia back in June 2018. Foxtel-owned Kayo has a plethora of international and domestic premium rights and the key to an engagement-growing sports offering. However with live sports currently offline, Kayo must look to build engagement beyond its pureplay broadcasting of live events. One innovative approach specifically pertinent to Kayo will be the Australian National Rugby League (NRL)’s proposed move to a remote island off the Gold Coast to kick-start the season and provide footy fans with a spectacle, due to its exclusive streaming rights ownership.

Subbing out real for virtual

Although Optus Sport currently has an inferior rights portfolio to that of Kayo, it does own the exclusive Australian rights for two of sporting’s crown jewels in the English Premier League and UEFA Champions League. Optus announced earlier this week it would replace its live EPL fixtures with e-sports streaming of the ePremier League Invitational FIFA 2020 tournament, in a quest to provide fans something to engage with. This follows the EA’s FIFA tournament ‘Stay and Play Cup’ last week which streamed on Amazon’s Twitch platform. The ePremier League tournament has a similar format, leveraging the branding and social presence of EPL’s real life stars, hoping to drive engagement through unique access to soccer’s biggest stars.

Manchester City’s Raheem Sterling beat Crystal Palace’s dynamo Wilfried Zaha 5-4 in yesterday’s most tantalising fixture. In the other highly-anticipated match, Liverpool’s Trent Alexander-Arnold comfortably brushed aside Manchester United’s representative and musician Tom Grennan 5-1. The quarter finals are set to conclude this Friday before the semis and final on Saturday 25th April. The competition is offering digital sports entertainment for stir-crazed fans and also raising money for the #PlayersTogether initiative, created by Premier League players as a collective way to generate funding for the NHS in the UK.

It was also refreshing to see the ePremier League adapt its approach to FIFA competitions, pivoting away from the FIFA Ultimate Team approach that failed to resonate in last year’s inaugural ePremier League competition. This year’s iteration is a much more enticing proposition, which pits real life club teams (and real-life players) against each other in the virtual realm, making it exciting to see if the minnows in the real world can upset the EPL juggernauts for the crown.

With sport-centric offerings a prime candidate for churn during this pandemic, Optus looks to not only provide some form of fix for its subscribers, but at $10AUD ($6.4) less a month than a Kayo Sports subscription, it could potentially steal a march on overall subscriber market share.

Meanwhile, as the economic downturn highlights the vulnerability of live sports, rights valuations are being re-evaluated and licensees are beginning to defer rights payments with the postponement of deliverable content. Kayo’s parent Fox Sports is looking to withhold payments to the Australian domestic A-League and reportedly considering withdrawing from its final three years of its six-year $346AUD million ($220 million) deal altogether.

This could present the soccer-focused Optus a prime opportunity to acquire the domestic rights, propelling its value proposition when this pandemic subsides. With Optus reporting in February that its sports OTT proposition had surpassed 825,000 subscribers (growing 15% since August 2019), which is almost 500,000 more than rival Kayo, Optus is on track to become the leading sports partner in the post-peak / post-pandemic era.

While retaining audience engagement during this lockdown is paramount, whichever of these two additive services can bring live sports back online first, coupled with acquiring more premium and domestic rights, will enable the successful one to steal significant audience share away from the other in the future.

This blog touches on the ideas explored in MIDiA’s recent report, COVID-19 and the Vulnerability of Pureplay Sports Streaming Services, now available to our clients. For access, please enquire at stephen@midiaresearch.com.

by Alistair Taylor
18 May 2020
With the pandemic-enforced postponement of live sports creating an entertainment void for sports fans, US broadcaster ESPN played its trump card to capitalise on the thirst for stimulating content during…

Consumption and Production Impacts on TV and Video Streaming under Lockdown

by Tim Mulligan
21 Apr 2020
Unsurprisingly the UK government opted to extend lockdown for a further three weeks last week, and today will mark the first full month of lockdown for UK consumers. In the US 95% of the population is…

Why the BBC Finds Itself in an Existential Battle for Survival

by Tim Mulligan
18 Feb 2020
On February 5 th  Nicky Morgan, the UK Secretary of State for Digital, Culture, Media and Sport,  announced  an eight-week public consultation on whether to decriminalise TV licence fee…
No thanks