COVID-19 exposed live entertainment as a vulnerable asset class, specifically following the pandemic-enforced postponement of live sports. One of the hardest hit during this hiatus and ensuing uncertainty has been athletics, which saw its largest engagement driver and the ‘greatest show on earth’ in the Olympic games postponed till 2021.

According to the Times, public broadcaster the BBC has decided not to renew its broadcast deal with the national athletics governing body UK Athletics (UKA), raising fears over its future. Recently appointed chief executive Joanna Coates has pledged to reinvent the sport, following the COVID-enforced cancellation of UKA’s flagship event, the Anniversary Games. The cancellation will cost UKA £1 million ($1.3 million), leaving it heavily reliant on UK Sport to secure additional government funding just to help navigate it through the global crisis and current recession.

For UKA, losing its biggest money earner and domestic broadcaster will have significant financial ramifications, leading to a ‘substantial’ reduction in income for the governing body.

The BBC’s six-year rights deal with UKA is reportedly worth around £3 million ($3.95 million) per year, and is up for renewal this year. The Times states the BBC no longer considers the sport value for money.

UKA CEO Coates has met with the UKA board on the 13th of August to plan for how the organisation will proceed if it loses its long-term broadcast partner. Losing the broadcast partner and failing to secure a new media rights deal could lead to larger implications in regard to its commercial sponsors, with its current Nike and Müller deals at risk, which also bring in significant revenue.

It is not just governing bodies set to lose out from live athletics’ hiatus. Athletes of Olympic disciplines are set to be significantly affected. Each international federation receives money from the International Olympic Committee (IOC), and depending on their size and addressable audience they receive between $7 million to $40 million. With the postponement of the games the IOC is likely to defer payments, as are licensees of dormant and cancelled rights. Athletes also face the unprecedented reality of isolation, which is likely to lead to bouts of anxiety and depression the longer this uncertainty and time away from honing their craft and competing (and thereby earning an income) persists.

Coates has also acknowledged the difficulty of enticing audiences to engage with athletics in the post-peak attention era, stating: ‘We need to understand we’re competing with the cinema, all sorts of things. We’re after people’s time.’ 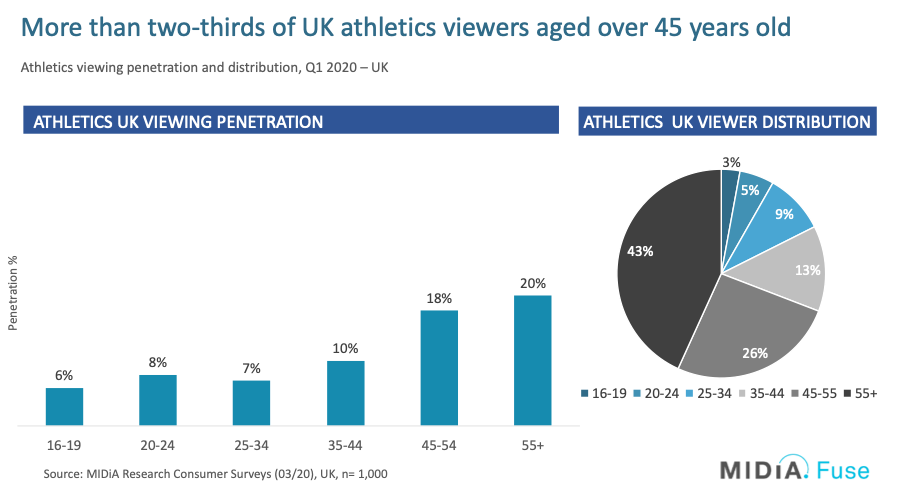 With more than two-thirds of UK athletics viewers aged over 45 (source: MIDiA Research), athletics and wider sports in general are facing a demographic cliff for engagement. Deprived of its headline events in the sporting calendar, UKA will be increasingly concerned of the fight to engage the underserved younger demographic. In Q1, athletics ranked sixth as a sport in terms of viewership in the UK at 13% penetration, three times less than soccer, highlighting the gulf with the most popular sport genre domestically in the UK and much of Europe (source: MIDiA Research). Even for a relatively low outlay compared with the BBC’s other sporting rights, UK athletics was viewed as an unnecessary and risky investment during this economic downturn, given the declining interest bereft of its headline events.

Grassroots engagement was a vehicle Coates employed during her tenure in UK Netball to grow participation and convert recreational players into viewing fans, and she hopes to replicate the same strategy with British athletics. However, without the Olympics to encourage grassroot participation, engagement with future fans (i.e. the younger digitally-native audience) will dwindle further. In a Track and Field Participation study by England Athletics published last year, although 13-19 year olds account for 54% of the participants in track and field athletics, this demographic also displays the greatest decrease / drop-out from 2017 to 2018 of 2.4%. With 16-19 year olds accounting for 3% of the UK athletics viewing audience, UKA has to do a better job in innovating to engage with this unaddressed demographic.

Revenue over reach has been debated at length, with rights holders opting for revenues over long term sustainability via increasing the addressable audience. This cannot be said for UKA, considering they have opted for free-to-air (FTA) broadcast partnerships with the BBC. However, the younger demographic does not operate with linear mediums, but rather digitally on socially-driven platforms. Rights holders have been experimenting with digital-first distribution partners, and Twitch offers UKA a route to consider given that 21% of Twitch weekly active users (WAUs) view athletics in the UK (source: MIDiA Research). With 16-34 year olds accounting for over four-fifths of UK Twitch WAUs in Q1 2020, understanding where this hard-to-reach demographic exists and bringing the content to the consumer is fundamental for future-proofing athletics as a digital entertainment asset in the UK.

by Alistair Taylor
6 Aug 2020
Just when sports fans thought it was safe to go back into the water, COVID reared its ugly head once more. UK fan pilot sporting events were all set to start allowing fans back into arenas and attend live...

by Alistair Taylor
24 Jul 2020
DAZN, the anointed ‘Netflix of Sport’, has announced plans to resume launching its services globally via a beta service covering boxing bouts In July and August, for users who have registered their...
No thanks