With 2021 commencing, the start of ‘D-day’ or ‘Year 0’ for sporting rights is upon us, as the major domestic sports rights start coming up for renewal.

Nowhere is ‘D-day’ for sporting rights more important than for the NHL, with 2021 shaping up to be the most significant year in the league’s 103-year history. Not only because its 10-year, $2 billion exclusive NBC US broadcast deal comes to an end – but also as the league looks to mitigate the ongoing disruption caused by the global pandemic.

According to Forbes, the NHL saw its revenues drop 14% to $4.4 billion during the 2019/20 campaign. With the puck dropping for its truncated 2020-21 season’s commencement next week, the league is innovating in the hope to offset the $1 billion in forecast losses attributed to playing matches in empty stadia.

The NHL is looking at multiple initiatives to diversify its revenue streams and recoup pandemic-driven lost matchday revenues. For the very first time the league is allowing teams to sell helmet advertising inventory, with Commissioner Gary Bettman reneging from his 2017 stance following the NBA’s approval for jersey advertising. According to TSN, the league hopes the new 2.25-by-3.75-inch sized inventory will raise around $15 million for its teams during the upcoming Campaign, with higher-profile franchises expected to generate $1 million each in sponsorship.

In a similar vein to recoup its losses, the NHL has sold the naming rights to its four realigned divisions for the upcoming campaign, following the pandemic-enforced border closure between Canada and the US. The NHL’s all-Canada division will be known as the Scotia NHL North Division in a deal with financial services firm Scotiabank, with car manufacturer Honda acquiring the naming rights to the West Division. These monetisation initiatives are unlikely to be popular among fans, but it is a pragmatic approach by the league to successfully navigate the unprecedented situation in which these rights holders find themselves.

NHL looks to capitalise on a ‘power play’ with broadcast innovation

Aside from diversifying its broadcast deals, the NHL has already started adapting to post-pandemic programming. Employing 12 more cameras than usual for its return to play (Stanley Cup playoffs), it aimed to provide never-before-seen camera angles and other broadcast enhancements to create a ‘made-for-TV’ product rather than the previous live-action focused proposition.

In a gambit to create a compelling and novel viewing spectacle while in-person fans are prohibited, the league announced its hosting of a unique two-game, two-day ‘Outdoor Weekend’ showcase at Lake Tahoe. For a league intent on creating a new and improved viewing experience, this enticing prospect presents a rare opportunity to get creative with the way games are broadcast, leveraging advances in technology such as drone cameras while simultaneously driving hype around this one-off weekend.

With the COVID-enforced prohibition of fans’ attendance has weakened the viewing spectacle, last seasons’ Stanley Cup final series between Tampa Bay Lightning and Dallas Stars averaged 2.03 million viewers, the second-lowest for the NHL since the 2004-05 lockout. It is worth noting that the 2018/19 season’s showcase of the St. Louis Blues beating Boston Bruins to the Stanley Cup drew a 9 million strong viewing audience, setting a record for the most-watched NHL game.

To put this figure into context, of the top 50 US TV broadcasts of 2020, the NHL’s 2019 record audience only achieved less than half of what the 50th ranked broadcast of 2020 achieved (18.7 million for the Steelers vs. Ravens week 8 contest on CBS). The NHL failed to feature in the top 50, with the NFL accounting for 71 of the top 100 TV broadcasts (even with its seasonal ratings dip). 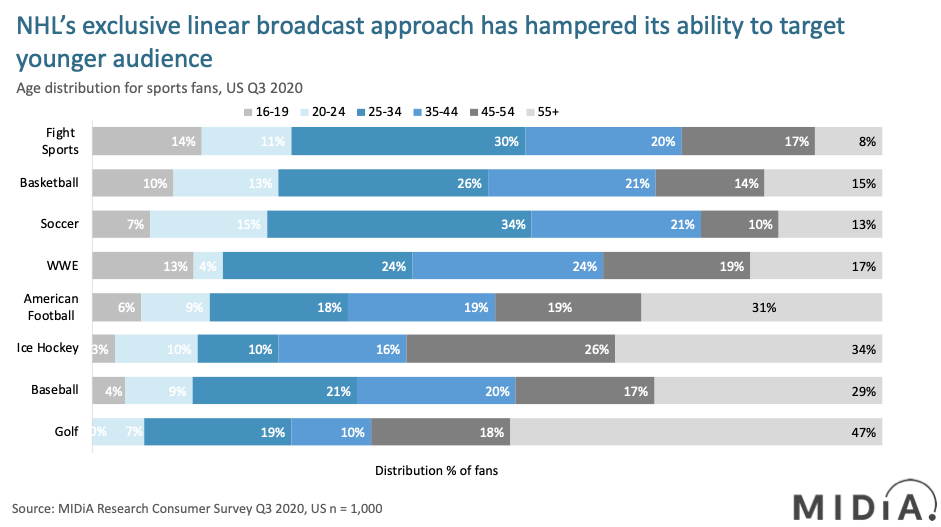 The NHL, which is the fourth largest franchise in US sports, is in danger of falling further behind its domestic rivals for fandom. At 11% fandom penetration in Q3 2020 (source: MIDiA Research), ice hockey has fallen behind soccer (12%), owning the second oldest fan base behind only golf for age distribution. With approximately two-thirds of its US fan base aged 45+, its exclusive broadcast deal with NBC has reduced its ability to target the younger demographic and future-proof its fanbase.

The NHL’s Commissioner has conceded that the archaic revenue over reach model needs a review, reportedly wanting to diversify its broadcast strategy by splitting its media rights into linear and digital packages, between multiple media partners, similar to the NFL, NBA and MLB. Opening up its broadcast rights and incorporating digital partnerships will support the NHL in growing its fanbase, diversifying its revenues and securing the long-term financial viability of the league.

Pay-TV (cable) operators remain a crucial part of the video landscape, but in order to maintain their position as premier rights distribution partners they must convince rights holders of their ability to reach younger audiences. With ‘Year 0’ beginning, a new sports format is likely to begin, with technology driving innovation to generate a heightened level of engagement, augmenting the viewing experience for consumers.

English Premiership Rugby gets set for a digital shake-up

by Mark Mulligan
30 Sep 2020
The COVID-19 pandemic has turned the music industry upside down in many ways but among the direct artists community there have also been signs of resilience and creativity in the face of adversity. For...
No thanks