Major label revenue surged in 2021, but what does that mean? 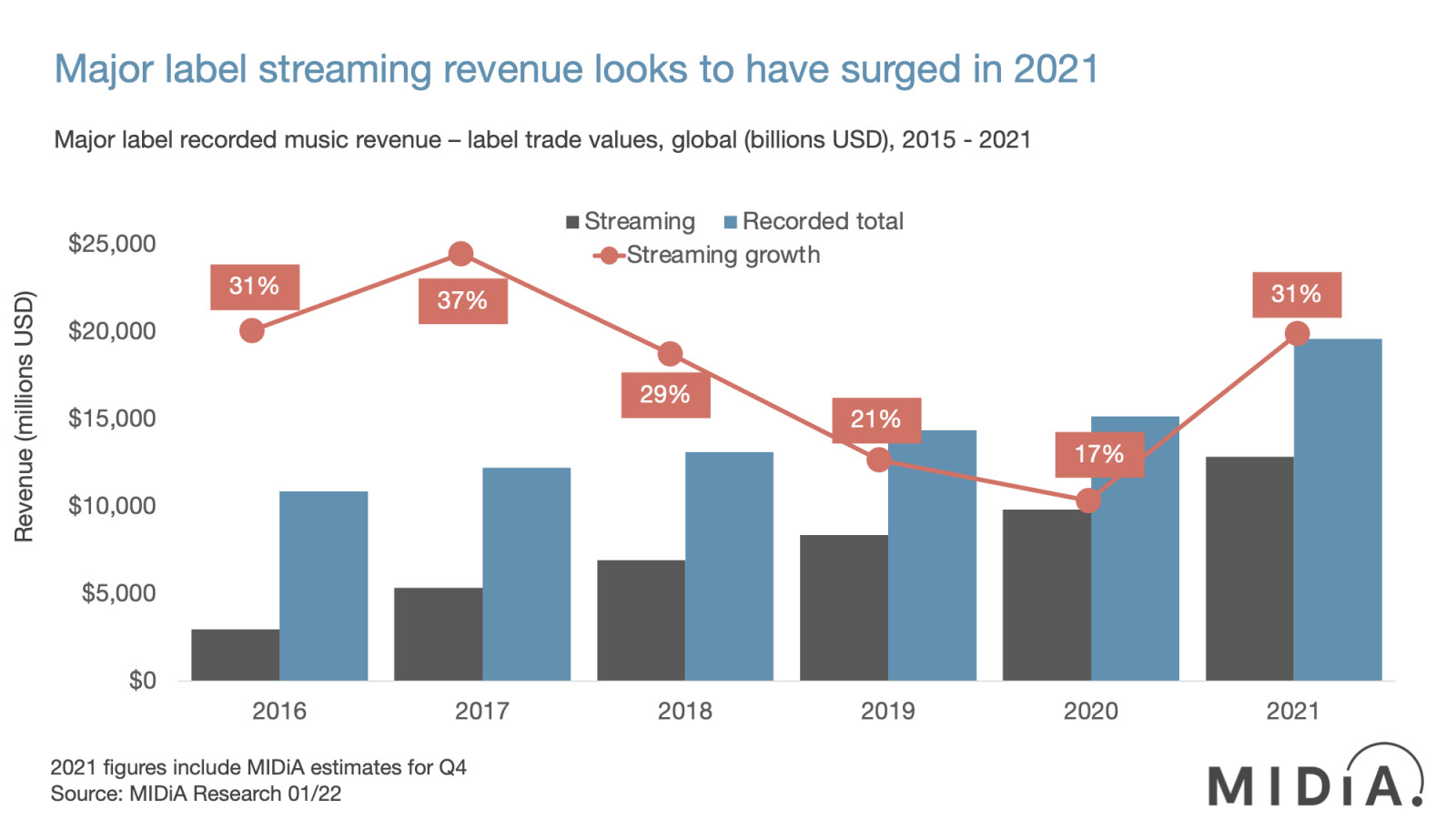 Major label revenue surged in 2021, but what does that mean?

2021 was an anomalous year for the recorded music market. Two of the majors did an IPO, the pandemic continued to disrupt the marketplace, and major label revenues grew at unprecedented rates. If the fourth quarter majors’ earnings follow similar seasonality patterns to previous years, collective major label recorded music revenue will be up by 29% in 2021, reaching $19.6 billion (a more bearish estimate is $19.3 billion). By way of comparison, 2020 growth was 6%, and 2019 was 10%. To put it another way, major label revenue increased by $787 million in 2020, and in 2021 it was up by $4.4 billion. 2021 was a red-letter year for the major labels, but was it a one-off or an industry pivot point?

To get to the answer, we first need to contextualise major label revenue growth within the wider market.

Predictably, streaming was the core driver of major label revenue growth in 2021, accounting for 67% of the revenue, and up by 31% to reach $12.8 billion. That level of annual streaming growth has not been seen since 2016. 2020 streaming growth was 18%. But streaming’s leading player, Spotify, did see that kind of growth. Spotify’s full year 2021 revenues look set to hit €9.6 billion (which would be up by 22% from 2020), and if we only consider premium growth (i.e., the part that is not boosted by podcast revenue), then growth was just 19%. And it is not as if Spotify is losing much ground in the global streaming market – its subscriber growth was largely in line with the global market average (excluding China). So, the majors grew streaming faster, somewhere beyond Spotify.

The major labels’ total revenue growth also follows a different trajectory to other parts of the market, The year-to-date performance of just one of the top four recorded music markets matches the majors’ trend (bear in mind that these four markets were 62% of global label revenues in 2020, so they shape global growth trends):

{It will be interesting to see how the IFPI allocates the revenue. There may well be quite a gap between their global total and the sum total of all the individual countries if this is indeed largely attributable to one off payments rather than reflecting organic, country level revenue.)

All of this means that the additional major label growth is likely reflective of factors such as:

·      Large, one-off payments from the likes of ByteDance, Twitch and Facebook

·      Licensing income from the same parties

·      Increased contribution from other markets

While all of these factors will be at play, it is the first two factors that are likely the most consequential. MIDiA estimates that these new non-DSP streaming income sources accounted for between $0.8 and $1.2 billion in 2021. Even at the lower end of the estimates, that revenue alone would have driven the same amount of growth in 2021 as all major label revenue growth combined in 2020.

There is a clear narrative that post-digital service provider (DSP) revenue is now becoming a central growth driver for the recorded music business. Clearly a very beneficial narrative to have had during an IPO year, especially if the trend was accentuated by one-off payments and settlements – which would help explain the divergence between major label growth and local market growth.

There are two key potential scenarios:

2.    Post-DSP streaming partners meet / exceed expectations, making 2021 and 2022 look much like the late 2000s and early 2010s did for DSP streaming, with minimum guarantees being more often than not

So, by 2023 we should be able to tell whether 2021 was a spike or a pivot point. If I was a betting man, I would probably put money on the outlook being closer to 2 than to 1.

Why the NFT hype will inevitably reach a (painful) normalisation point

by Hanna Kahlert
17 Dec 2021
Few conversations are safe from the inevitable NFT mention these days, with everything from complimentary digital badges from events , to art sale authentication , to the whopping $25 million in music...

The key strategic drivers that will shape D2C video in 2022

by Tim Mulligan
4 Jan 2022
We are one week away from the  Hybrid Futures | MIDiA 2022 Predictions Webinar , where the  MIDiA Research team will be going through the big trends that are sweeping across digital entertainment in...

by Kriss Thakrar
2 Nov 2021
When Francisco Partners brought together Native Instruments and Izotope, it created the first creator tool major . Now a second player has staked its claim: Fender has made one of the biggest creator tools...
No thanks