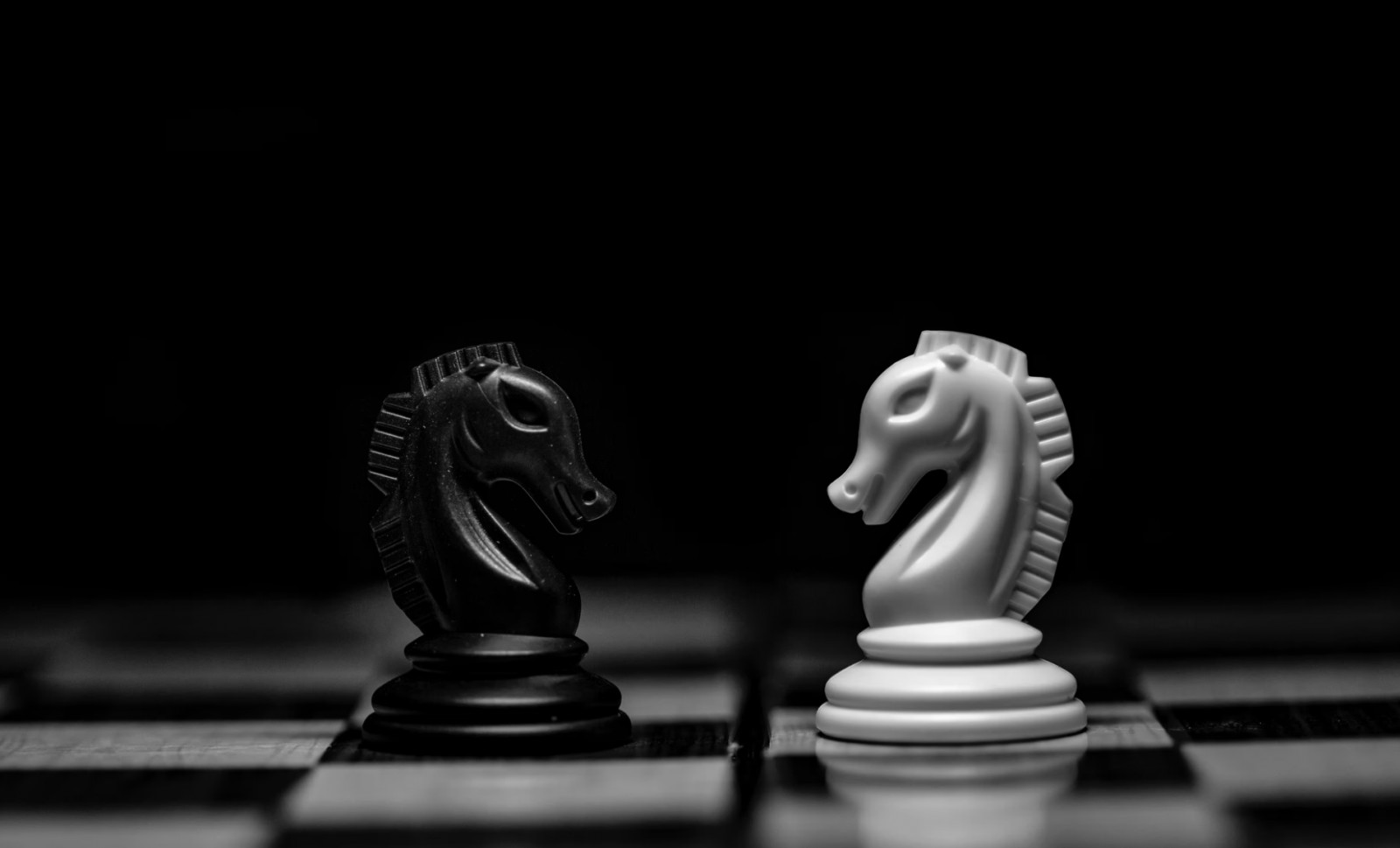 As we have covered before, games engagement began to experience effects of the Covid-bounce. As usual, however, there are winners and losers within the wider micro-dynamics. The following graph demonstrates how 20 key games franchises fared in the US between Q2 2020 and Q2 2021, in terms of consumer penetration growth: 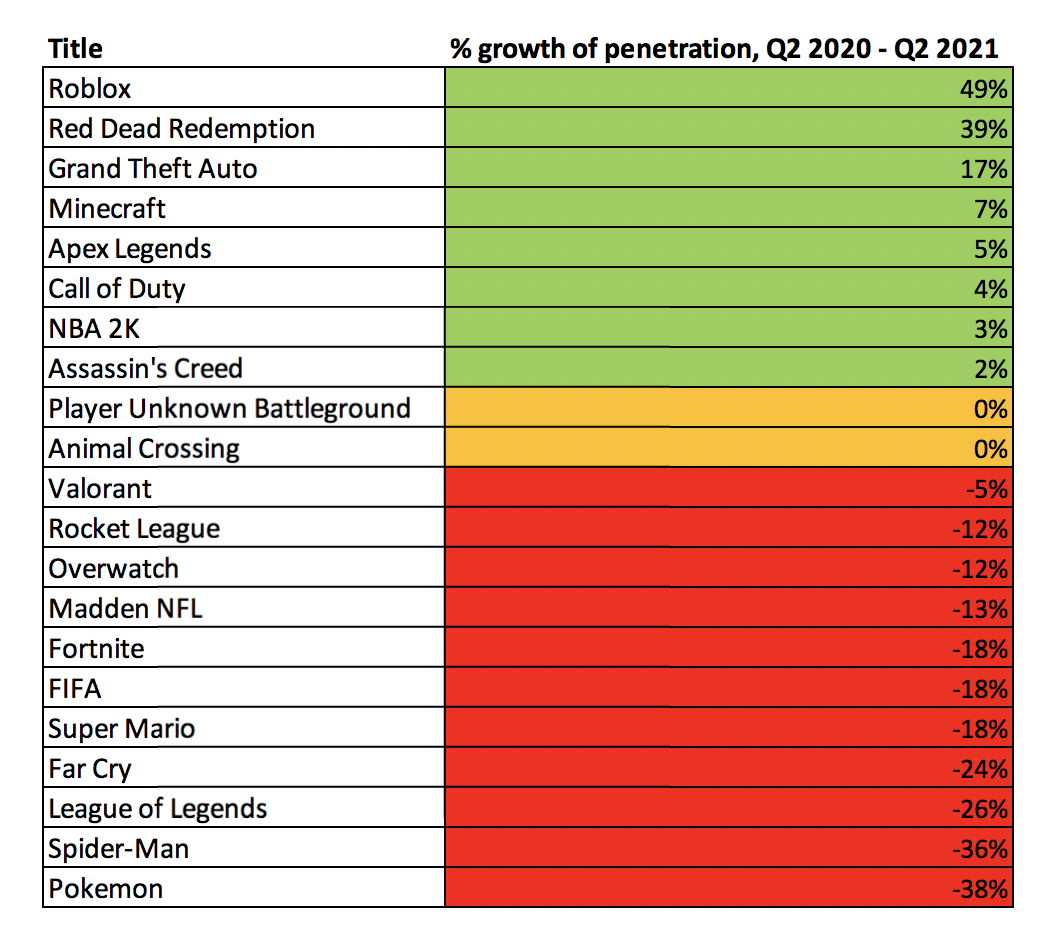 Roblox and Rockstar are the biggest winners

Roblox grew 49% in penetration year on year. It is a testament to the value of tapping into the ‘lean-in’ trend, as well as enabling self-expression and providing perpetual reasons to ‘hang around’ inside the game – these are the key factors (as MIDiA presented in its 2021 games webinar) that would drive growth for games for the next half a decade. Roblox has truly embraced the cross-entertainment opportunity – music, fashion, sports – the works! As long as it keeps on going, the only way is up for the next couple of years.

The one caveat to ‘winning’ is that the company is yet to turn profitable. In the short-term, however, if it can sustain a strong user and engagement growth story, while providing a feasible mid-long-term roadmap towards profitability, investors will likely remain happy.

Red Dead Redemption and GTA have captured second and third places, with 39% and 17% YoY penetration growth, respectively. This is all the more impressive given that both games are expensive AAAs compared to, for example, the free-to-play Fortnite, which is running out of steam. Furthermore, these are no newly hyped games with GTA 5 having been released in 2013 and RDR2 in 2018. The key to the ongoing success has been embracing and doubling down their online games worlds, motivating consumers to ‘live in the game’ rather than ‘finishing it’.

At 22% consumer penetration, the Call of Duty franchise has the highest penetration rate of all games that MIDiA tracks. Despite its mature penetration rate, the franchise recorded a 4% growth since Q2 2020. It owes this growth largely to the deployment of free-to-play Call of Duty Warzone (a battle royale-centric title), which clearly cannibalised part of Fortnite’s audience. CoD Warzone is rated 18, which also makes it an aspirational battle royale to switch to, for gamers who grew out of playing Fortnite and are excited to explore the world of 18-rated games.

Fortnite is running out of steam

Though Fortnite was among the pioneers of perpetual cross-entertainment games worlds, it experienced significant headwinds over the last year, which have sent it onto a 18% penetration rate decline between Q2 2020 and Q2 2021. Now at 11%, Fortnite’s penetration rate dropped to match that of Minecraft (which sustained a modest 7% growth in the same period). Firstly, the entrance of new battle royale titles, such as CoD Warzone, cannibalised engagement with Fortnite. Furthermore, established franchises (e.g., GTA) ‘featurized’ the battle-royale mode which once acted as a USP for Fortnite. GTA and CoD players (the two largest franchises in terms of penetration) can get their battle royale dose without launching Fortnite, which further contributes to its engagement cannibalisation. Last but not least, Fortnite was never allowed back into the App Store, following Epic’s lawsuit fiasco against Apple. This also contributed to the YoY decline of Fortnite’s penetration rates. The additional issue for Fortnite is that Apple device owners are valuable, high-spending users across entertainment, so Fortnite’s absence from the App Store will likely translate into revenue slowdown for the game too. Unlike Rockstar, with GTA and RDR2, for example, Epic Games has yet to prove that it has got the right recipe to produce breakaway success hits beyond Fortnite. So far, it has been on more of a journey to acquire its way into growth continuation (e.g., Rocket League or Fall Guys). If Fortnite continues to slow down, Epic could find itself struggling to fund its acquisition strategy going forward, and potentially end up facing a similar ‘running out of steam’ problem that Rovio (Angry Birds maker) faced years ago. The key to maintain and grow engagement for Fortnite will be in doubling down on cultural relevance through cross-entertainment partnerships and experiences. The more exclusive experiences it can secure for players, the higher its chance of surviving in the long-term.

All sports games are down, except NBA 2K

While both EA sports titles, FIFA and Madden NFL, have declined year on year, 2K’s NBA 2K series has been the only sports title to grow, albeit by a modest 3%.

Pokémon titles’ penetration has declined by 39% year on year. Pokémon GO was one of the success stories in the early days of the pandemic. A truly agile pivot to accommodate playing within the constraints of lockdown. However, in doing so, Pokémon GO may have put itself closer to its competitors, slightly diluting the importance of geo location, physical movement and IRL exploration – a space it ruled pre-pandemic. Now that outdoor life is coming back, Pokémon GO might have to face the challenge of repivoting back to what it once was, or risk increased competition from other titles going forward. Bridging IRL and digital experiences will play a large role in revamping engagement in the US. The popular Pokémon GO Fest will serve as an important ingredient to help Pokémon GO find the right IRL vs. digital balance.