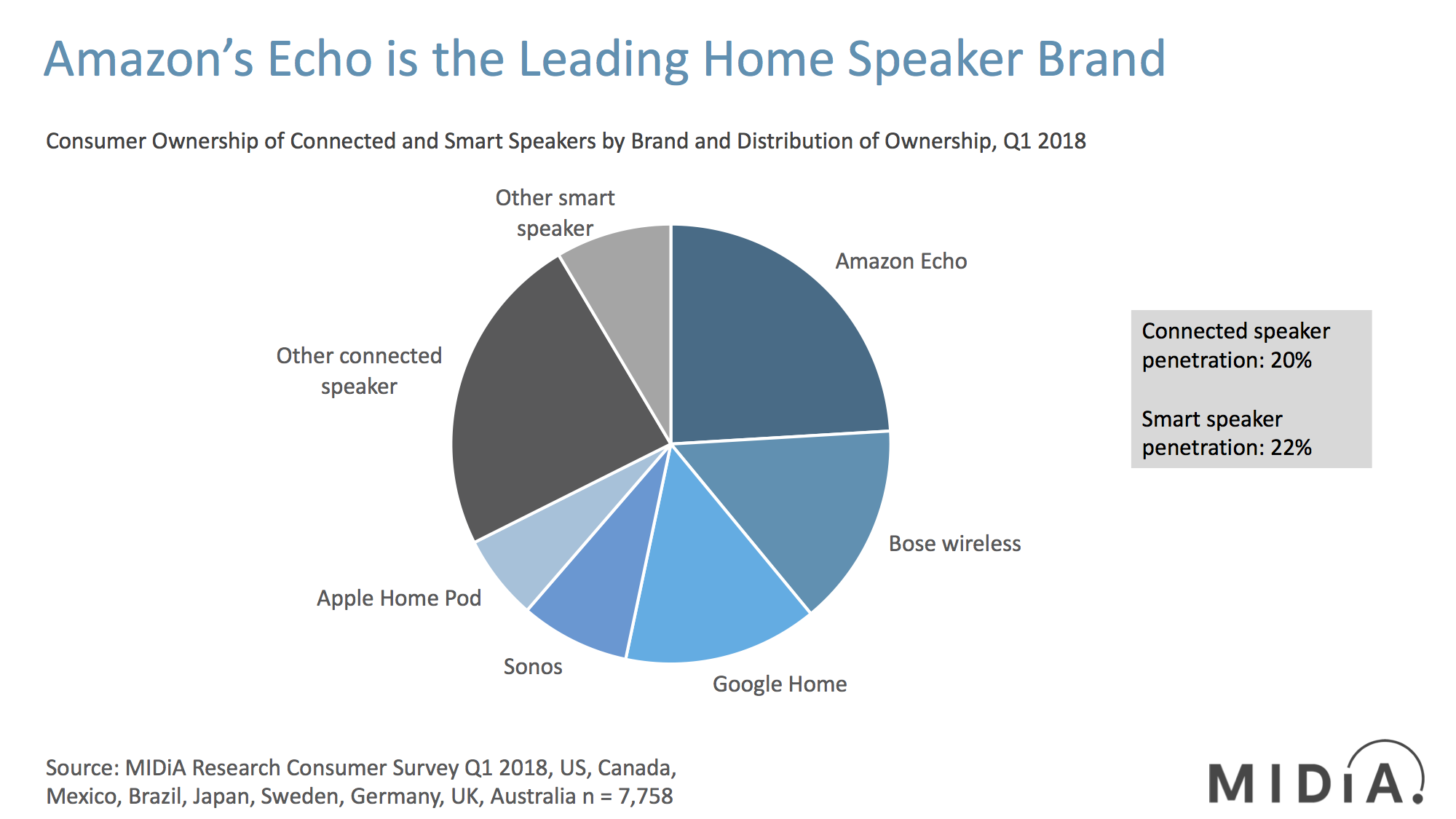 Earlier this year, MIDiA predicted that Facebook would join the smart speaker market.

With the announcement of Portal – Facebook’s smart speaker with screen devices, this MIDiA prediction has come to pass, though a little later than initially expected. The Cambridge Analytica scandal, which put a dent in Facebook’s sails (and stock price), meant it was not a good time to sell a device designed to collect more data within the home. However, I am reminded of the concluding scene of 2010’s Facebook origins story The Social Network, which sees Rashida Jones’ lawyer character tell Jessie Eisenberg’s Mark Zuckerberg to settle his lawsuit with the Winklevosses (a fortune we now know that was immediately spent on Bitcoin) calling it ‘a speeding ticket’. Mark Zuckerberg and Sheryl Sandburg clearly believe enough time has passed to mitigate that scenario, although the fact this announcement has come sooner reveals how high the stakes are in voice control.

A beachhead in the living room

Portal comes in two sizes. The larger Portal+ costs $349 and has a 1080p screen that rotates into either portrait or landscape mode with a gentle push. The smaller Portal costs $199 and has a 720p screen that stays stationary. Facebook is also selling the Portal in bundles that knock $100 off the total price for two devices. Though pricier than the Echo ($149.99), Facebook has the clear advantage in audience scale over Amazon (2.2 billion monthly active users vs Amazon’s 300 million), meaning any advertising opportunities with an emphasis on volume and engagement are likely to favour the company. Facebook could also capitalise on the renewed scarcity factors in voice-engendered advertising. Voice control links to content allow additional opportunities for advertising. Sports rights broadcasting, which Amazon and Facebook have both made tentative steps in, offers the opportunity to use voice control technology for pushing limited-time offers, such as price discounts pertaining to merchandise and experiences through the Alexa, thus facilitating purchasing behaviours and creating an innovative and highly-targeted advertising ecosystem. Calling out ‘buy now’ from the sofa is the ultimate frictionless call-to-action response.

The smart speaker market is just getting going, though as the above data from MIDiA’s forthcoming Home Speaker report shows, Amazon has got a very strong early market lead. But, in these early days of the technology’s adoption curve, Amazon’s Echo could still yet prove to be the Betamax of voice control. The scale of users generating data is arguably the most important asset of an AI player. The more data a company can get, the better for its AI to power its voice-driven capabilities. Amazon, quite rightly, played its hand in the best possible way it could: it moved first in order to compensate for its much smaller addressable audience than the other GAAF (Google, Apple, Amazon, Facebook) members. This will give it a head start in data collection and the opportunity to grow market share through first-mover advantage. With both Apple and Facebook looking for their next major growth story, Amazon will continue to heavily rely on the success of Prime to drive Echo sales, less its core competitors leverage this consumer advantage in the coming years. But out of all the players, Facebook is the most intriguing. It has all the foundational assets but no hardware play, save for the lukewarm response to the Oculus Rift. Either way, the home speaker market just got an adrenaline shot.