Why the Voice Control Landscape Will Be So Competitive 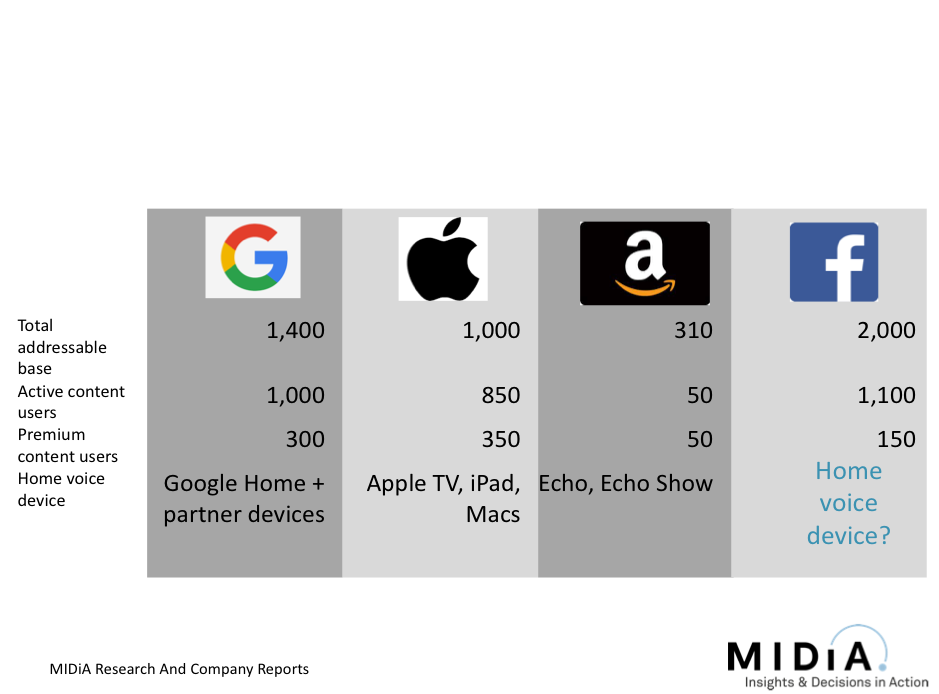 With the success of Prime and the Echo, Amazon at present is experiencing the same halo effect that graced Microsoft in the 90s and Apple in the 00s. With their finger on the pulse of everything from entertainment (Manchester by-the-sea, American Gods) to drones, there appears to be  a consensus that save for anti-trust legislation, Amazon will become the first $1 Trillion market cap company.

Part of this veneer is of course attributed to the success of the Amazon Echo. However, things become more complex with regards to the voice control space and who could ultimately dominate in terms of influence and sales when we take an alternative view of the customer relationship that the four tech majors have with consumers. Particularly, this is relevant in terms of the addressable audience that each company serves. Amazon have stolen an early lead with the popularity of the Echo, yet for all Amazon’s dominance in e-commerce, the 310m engaged users for the Amazon ecosystem is far smaller than that of its tech rivals. Social media (Facebook has 2bn users), Search (Google’s 1.4bn) and smartphones (Apple’s iPhone sales are approximately 1bn) all tower over such a user base. Additional factors include that combined with the 850m credit card details the company has stored, Apple already has the paying relationship and brand equity within the home that means it could more or less instantly become a major player in home voice control through it’s Siri assistant and the nucleus of IOT services.

Consequently, in these early days of the technology’s adoption curve, Amazon’s Echo could still yet prove the Betamax of voice control. The scale of users generating data is arguably the most important asset of an AI player, and Google’s IO conference revealed a very different strategy to that of Amazon’s. Google’s emphasis appears to be on the Google Assistant product being available on as many devices as possible, suggesting their position in voice control hardware is more about improving their AI an existing search capabilities than owning the home control market. The more data a company can get, the better its AI to power its voice driven capabilities.

Amazon has played its hand in the best possible way it could: it moved first in order to compensate for its much smaller addressable audience (50m premium content users) than the other GAAF (Google, Apple, Amazon, Facebook) members. The head start will give it a head start in data collection and the opportunity to grow market share through first mover advantage. With both Apple and Facebook looking for their next major growth story as both smartphone and social growth flatline, Amazon will continue to heavily rely on the success of Prime to drive Echo sales, unless their core competitors leverage this consumer advantage in the coming years. But out of all the players Facebook is the most intriguing. It has all the foundational assets but no hardware play. Thus MIDiA Research predicts that Facebook will make a play for the living room with a home entertainment device with a strong focus on gaming, video, communication and, yes, voice.