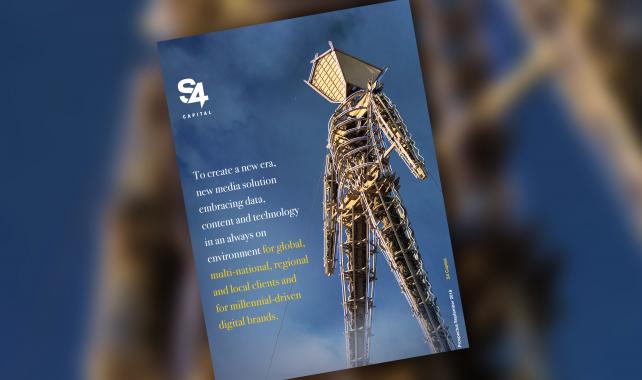 F. Scott Fitzgerald famously said there are no second acts in American lives. Sir Martin Sorrell however is not an American, despite having conducted extensive business in the US and being rumoured to hold the record for most the transatlantic concord flights between London and New York. He will therefore hope nationality plays little role in the success of his latest venture, S4 Capital. Having cast an inscrutable figure in the press since his controversial departure from WPP, the company he drove to become one of the largest marketing, Martin Sorrell’s S4 Capital finally published its investor prospectus this week. A tenacious statement of intent, the piece sets forth the aims of the company and where it seeks to create value, symbolically featuring a wicker man on the cover from this year's burning man festival to communicate the company's digital first strategy. What this strategy will entail however, is an interesting question:

Voice control could be a significant growth vehicle for the company, given some of the largest advertisers by spend (FMCG brands such as Unilever and Procter and Gamble) are about to feel the impact of such devices should they attain mass adoption. This is because Amazon has ostensibly declared war on brand for the 90%-plus of purchases that most consumers make through a storied brand loyalty and inertia, and have forgotten they even purchase (toothpaste, batteries etc). These are often not the most glamorous industries, but they are staggeringly profitable. For context, the entire recorded music industry in 2016 was worth around $16 Billion. In that same year, Procter and Gamble alone delivered revenues of $65.3 billion. Its competitors in the FMCG space, Unilever and Nestlé, also had revenues of $65.5 billion and $68.9 billion respectively — $199.7 altogether, and we haven’t even accounted for the independent sector.

While such companies have in recent years cut their digital expenditure in reaction to what they perceive as poor reporting via social media platforms—expect this to be a bump in the road, they still need to reach consumers. The opportunity for S4 is the these companies are about to undergo a disruption. Everything into which they have invested decades of marketing to build brand equity, is about to be removed by the zero UI factor of voice. From packaging, shelf space to visual advertising cues, these companies have spent billions to incentivise consumers to buy into a brand that aligns with their personal values. In the frictionless purchase cycle the Echo engenders, Amazon in one clean swoop has rendered much of this investment superfluous. Combine this with the decline of TV viewership, voice, along with social and ad-supported online video (YouTube), will become one of the few opportunities to reach millennial consumers, which according to S4's prospectus is their chief target demographic. This would instigate a dramatic uptake in the advertising leverage of podcasts and music shows via voice-controlled devices. Such content forms are a lean-back experience in which the user often does not skip advertising. With Amazon likely to push its own private-label brands through the device, expect this sector to invest heavily in diversifying its advertising, and for audio domains to be a chief beneficiary. This is where agencies such as S4 Capital, which has the ability to provide the lean service at scale that these advertisers require, come in. This structure will also enable the company to, in Sorrell's own words, 'bypass agencies and take on consultants', whom Sorrell believed had made inroads into the marketing service business in recent years.

In his time at WPP, Sir Martin regularly called for a break-up of the Google-Facebook duopoly on digital advertising. Indeed, he was a huge advocate of Snapchat and welcoming of Amazon’s tentative steps into the world of advertising — a company which through the combination of voice and Twitch is set to deliver as much as $8/9 billion USD in revenue for 2018 and at 132% growth YOY for Q2, is the fastest growing cohort of Amazon’s business. Aside from these players, there is a grand opportunity to capitalise on ad discontententment. AT&T CEO Randall Stephenson said this week: “There is not a single advertiser on this planet who says ‘I wish I could spend more with Google and Facebook. That person does not exist.” As MIDiA has raised in the past, ad budgets are not just shifting to digital, but also are looking for alternatives to these two companies, which regularly court scandal regarding the reporting of marketing ROI metrics.

Businesses such as Sorrell’s WPP also appear increasingly anachronistic in the digital era. In terms of value creation, in 2017 one Facebook employee creates an average of $1.6 million USD in revenue, for Alphabet that figure is $1.4 million. For WPP and its 200,000+ employees worldwide, that figure was closer to 100,000 per employee, inferring that the present structure of advertising giants cannot compete with the lean abilities of big tech. S4 could serve as the intermediary that facilitates the desire to advertise across a wider range of companies with reduced complexity. Now that Sorrell has the opportunity to push the reset button on an advertising company’s structure, the hope is he will be able to create a meaningful competitor to the big four. With his contacts, ability to raise funds and track record, there is every chance he could do it again.