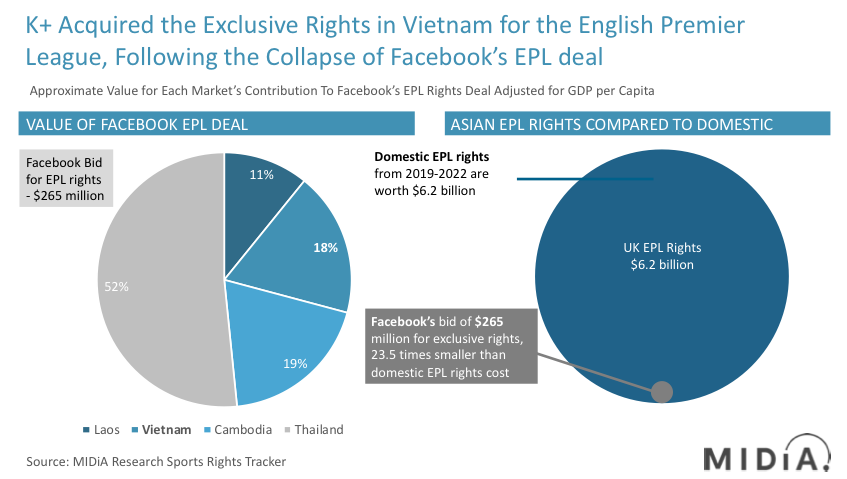 K+, the joint venture between VTV and Canal+, has acquired exclusive rights in Vietnam for the English Premier League (EPL). The three-season deal starting this August spans the 2019/20 – 2021/22 seasons. K+ will provide exclusive coverage of all 380 matches per season under the agreement.

Initially these Vietnamese rights, along with exclusive EPL rights in Thailand, Laos and Cambodia, were acquired for £200 million ($265 million) by Facebook back in July 2018. This deal showed Facebook’s intent to test the waters in the streaming video market for live sports, as well as the EPL’s recognition that the world has migrated online. With reach being the main aim, encouraging competition between streaming platforms bidding for future rights is key. The EPL should be aware of the demographic cliff facing traditional pay-TV broadcasters, with only 15% of 16-19 year olds watching live TV (MIDiA Research’s Q4 2018 survey). Future-proofing not only its revenues but also its fan base is essential when deciding which medium (linear or digital) to reach consumers with.

It transpired that Facebook had only acquired an exclusive window for negotiating the rights agreement with the EPL, following the highest bid. Unfortunately, Facebook entered a ‘standstill agreement’ following eight months where lawyers from both parties could not agree upon a number of issues. Subsequently this led to the deal collapsing, returning the rights to tender, with K+ pouncing on one of the four markets Facebook had initially acquired.

Facebook has missed a prime opportunity to experiment with live sports streaming. Not only did Facebook lose out on establishing a relationship with one of the sporting world’s most valuable brands, it also missed the chance to gauge the appetite for consuming streaming sports on its platform at a fraction of the cost of domestic EPL rights.

Facebook bid $265 million for the EPL rights to the Asian territories. As the third biggest market by GDP per capita, Vietnam accounts for 18% of the aggregated GDP per capita across the four markets. This would equate to $48.6 million of the $265 Facebook paid, a relatively small fee for the opportunistic K+ to gain the rights. Facebook’s $265 million bid for four markets was 23.5 times smaller than the $6.2 billion the domestic rights of the EPL sold for the 2019/20-2021/22 seasons. K+’s investment was therefore 128.3 times smaller. The opportunity Facebook missed was that of a cost-effective way of testing the waters — the reason it was looking into obscure international markets for distributing premium rights in the first place. It was much easier for Facebook to walk away from this opportunity considering the significant investment it would have needed to go after domestic rights instead, a significantly larger gambit.

Although Facebook missed the opportunity here, owning Major League Baseball rights in the US and UEFA Champions League and Copa Libertadores in Latin America provides other brilliant opportunities to test the waters with live streaming in passionate sports markets. Tech majors have a unique opportunity to become the main threat to usurp traditional broadcasters’ assets when the top tier rights come up for renewal in 2021/2022 globally, mainly because they are not pureplay streaming services and have the financial resources available to go head-to-head in bidding wars. The majors have the luxury of being able to redistribute the rights once acquired without looking like they are diluting their offering, something sports-centric services cannot do without suffering brand damage. This ability to offset the risk of these investments, without being solely reliant on a subscriber base for revenue generation, provides a hedge worth making to test whether live sports can increase consumer engagement within its ecosystem, while affording more advertising opportunities for additional revenue.