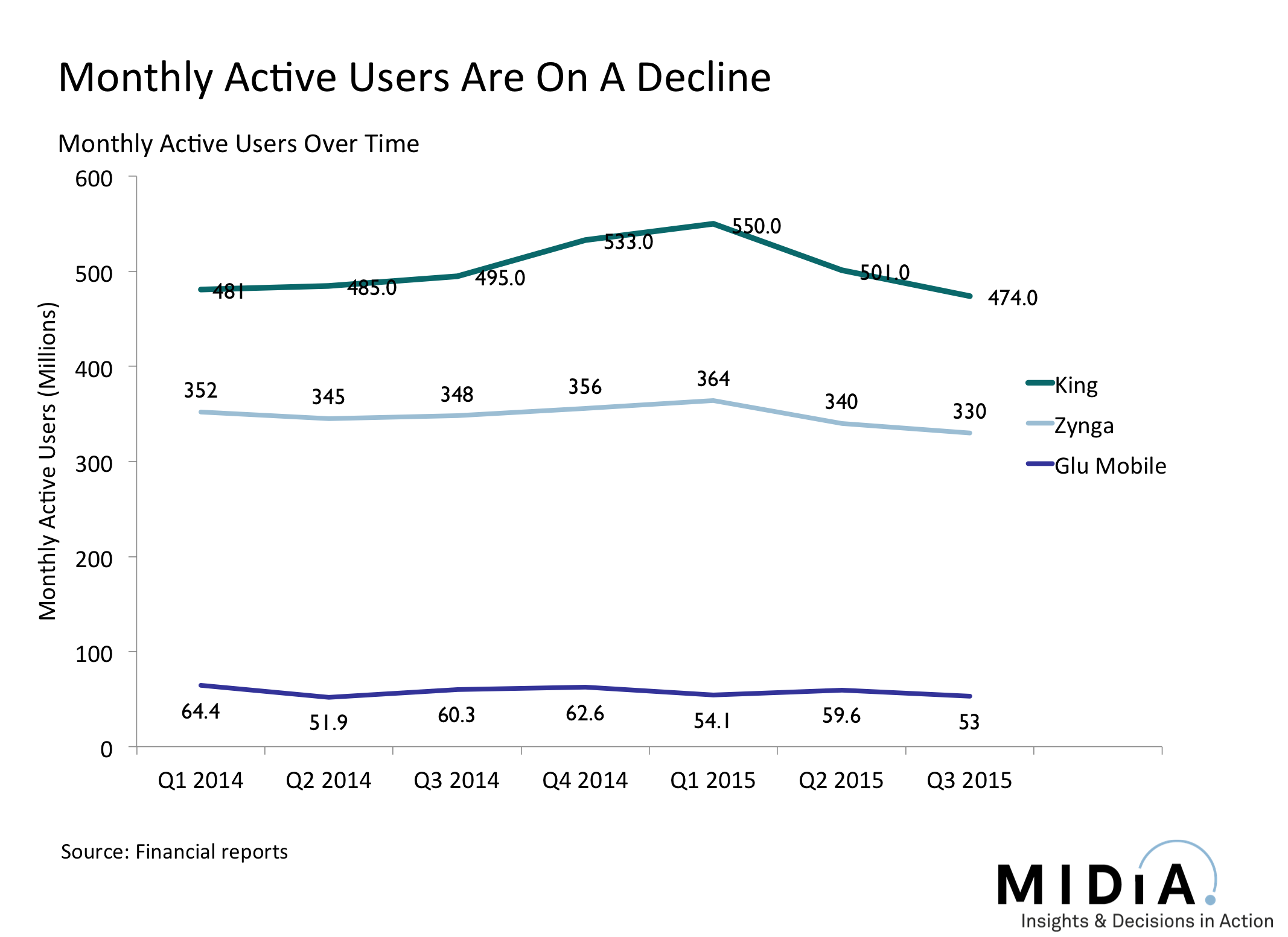 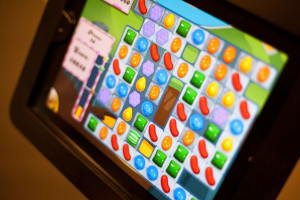 We pointed out the risks associated with the app economy being too dependent on a few hit apps back in 2014. The big question always was whether new titles of hit mobile game publishers could replicate or supersede the popularity of their previous hits, before users started becoming bored and investors start to panic. Recent financial results of several major mobile game publishers were disappointing and it’s becoming clear that publishers are struggling in their race with time. The mobile gaming app bubble burst already begun. 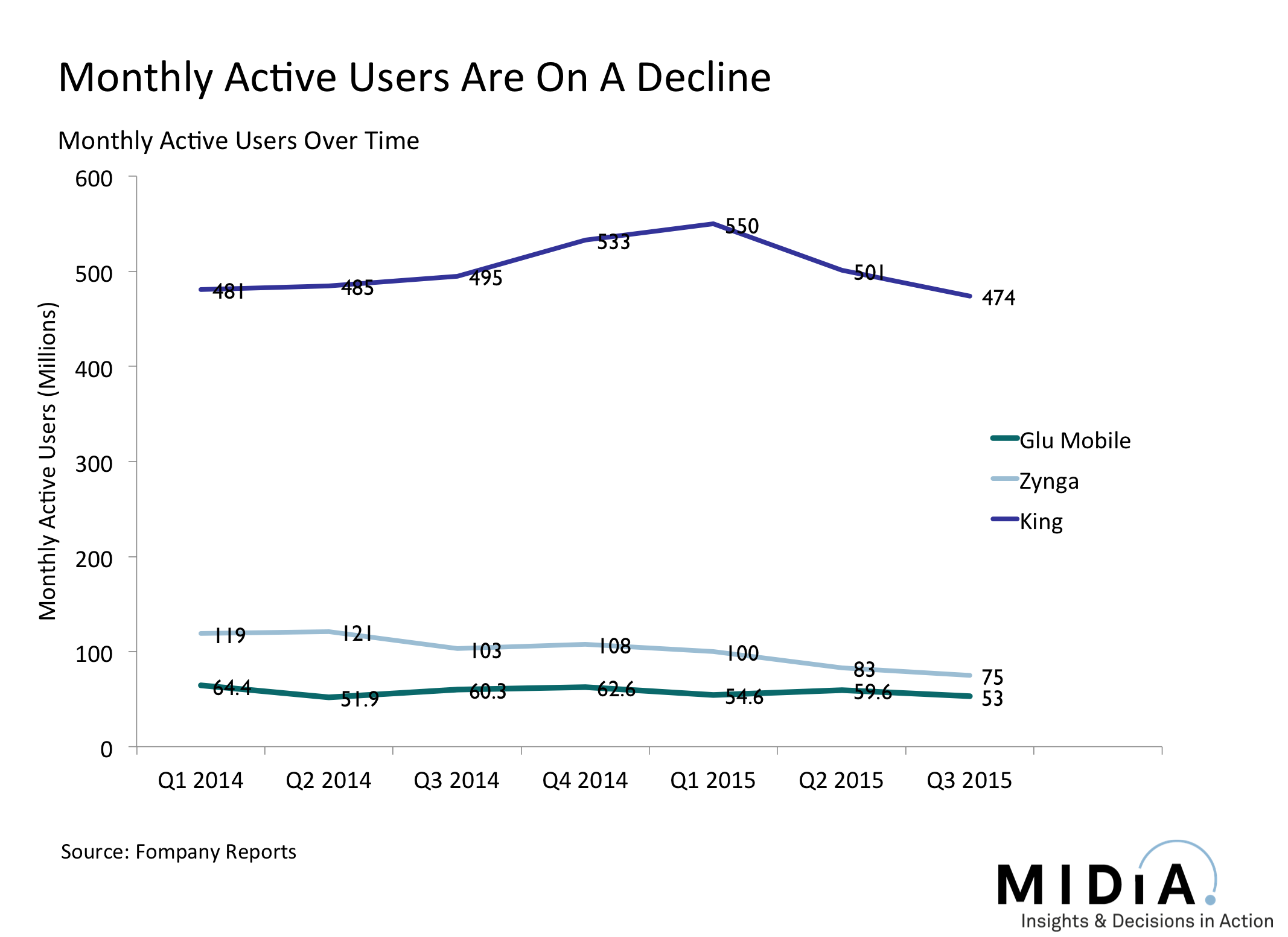 There are several signs suggesting that top publishers have started to run out of steam. One is that number of Monthly Active Users is declining for superstar publishers. Not only did King’s MAU decrease for the first time ever this year, the decline has now entered it’s third consecutive quarter. Zynga is also struggling with it’s MAU metric. It actually cost the CFO David Lee his job, as the Q3 2015 results showed over 27% decline from Q3 2014. GLU Mobile had a bumpier ride climbing up and down over several recent quarters. Nonetheless, MAUs never returned to the 64 million from Q1 2014.

Another crucial sign of mobile game publishers growing troubles is the decline of monthly unique payers. King has lost a whooping 42.5% of its unique payers since Q1 2014, while Zynga lost 30.7% in that period. This is even worse news for publishers than the headline drawing MAU numbers, because it’s where most of their revenue is concentrated. Simultaneously, Average Revenue Per User (ARPU) is on a rise, which proves that whales are staying, while low paying and free users are starting to abandon ship. It is one of the reasons why revenues aren’t falling as fast as for unique payers.

King serves a mainstream user base of casual gamers, whose primary objective is often to ‘kill time’ instead of ‘proceed to the next level’, let alone ‘be psyched for the next years release’. This is one of the major differences between freemium mobile game franchises like Angry Birds or Candy Crush and those of traditional game publishers like EA or Activision who are growing in the mobile space. Both, EA and Activision built their most successful franchises catering to well defined niches first, through desktop and consoles. Only then did they expand into the wider, more mainstream, mobile space. With a solid payer base and a clearly proven business model, they are not as dependent on mobile revenue, compared to their 'mobile only' competitors. Having a secure and profitable business model in place now gives them more freedom to be creative and experiment with wider audiences on mobile. In contrast, purely mobile freemium franchises were built up catering to mainstream masses first. Although mobile games have managed to find a few paying superfans within the large masses of free users, they are still under pressure to spend vast amounts of their resources to sustain the most populous, least profitable free user segment. Free users are costly to retain and never likely to build up as much brand loyalty as paying users. This means two things: One, they will be susceptible to melting away more rapidly. Two, because the casual mobile game segment of free users is so wide in terms of consumer preferences, there is a lower chance of the next release resonating well with all of them. In this sense free users make the app economy more volatile and unpredictable. But mobile publishers can’t just neglect free users now. Free user monetization via ads remains the most powerful growth outlook for the app economy. Total app revenue from free users will grow 327% between 2014 and 2020, compared to 136% of app buyers. Volatile patterns in user bases will alienate investors, who are already loosing patience. Needless to say, King, Zynga and Glu Mobile are all trading below their IPO at the time of writing.

What’s next for superstar app publishers and the mobile game app economy?

It’s becoming clear that mobile games can be great short-term cash cows, but even the industry champions struggle with long term business model sustainability. Will we see more ‘just in time’ acquisitions from large traditional game publishers like Activision or will mobile game superstar publishers start dwindling towards replacement by the stars of tomorrow? Most likely both. Either way, the app economy as a whole should come out as a winner. Acquisitions by companies with diversified portfolios lessen the impacts of volatility on bottom lines and thus solidify the foundations of the app economy. If there won’t be enough acquisitions to dilute panic, and superstar publishers will keep loosing on value, there will be a major correction of mobile gaming companies’ valuations. They will become more reflective of the long-term value and performance that mobile game publishers are able to sustain. The less successful large mobile game publishers will become, the more space is there for smaller and indie developers to meaningfully compete in the app economy. A large share of total app revenue is distributed amongst relatively few superstar publishers. Having revenue distributed between more, smaller entities decreases the volatility of the app economy. Smaller individual companies going bust will not make as much of a dent to global revenues as they do today.

The mobile gaming industry is about to learn the hard way what the music industry has already learned . That regular, meaningful and long term spending on entertainment/content is only sustainable with a minority of superfans. Others will take advantage of the free alternative if presented with such option. The net result is that the app economy ends up bearing the burden of having to finance the free users’ fun.