Why Netflix Can Turn A Profit But Spotify Cannot (Yet) 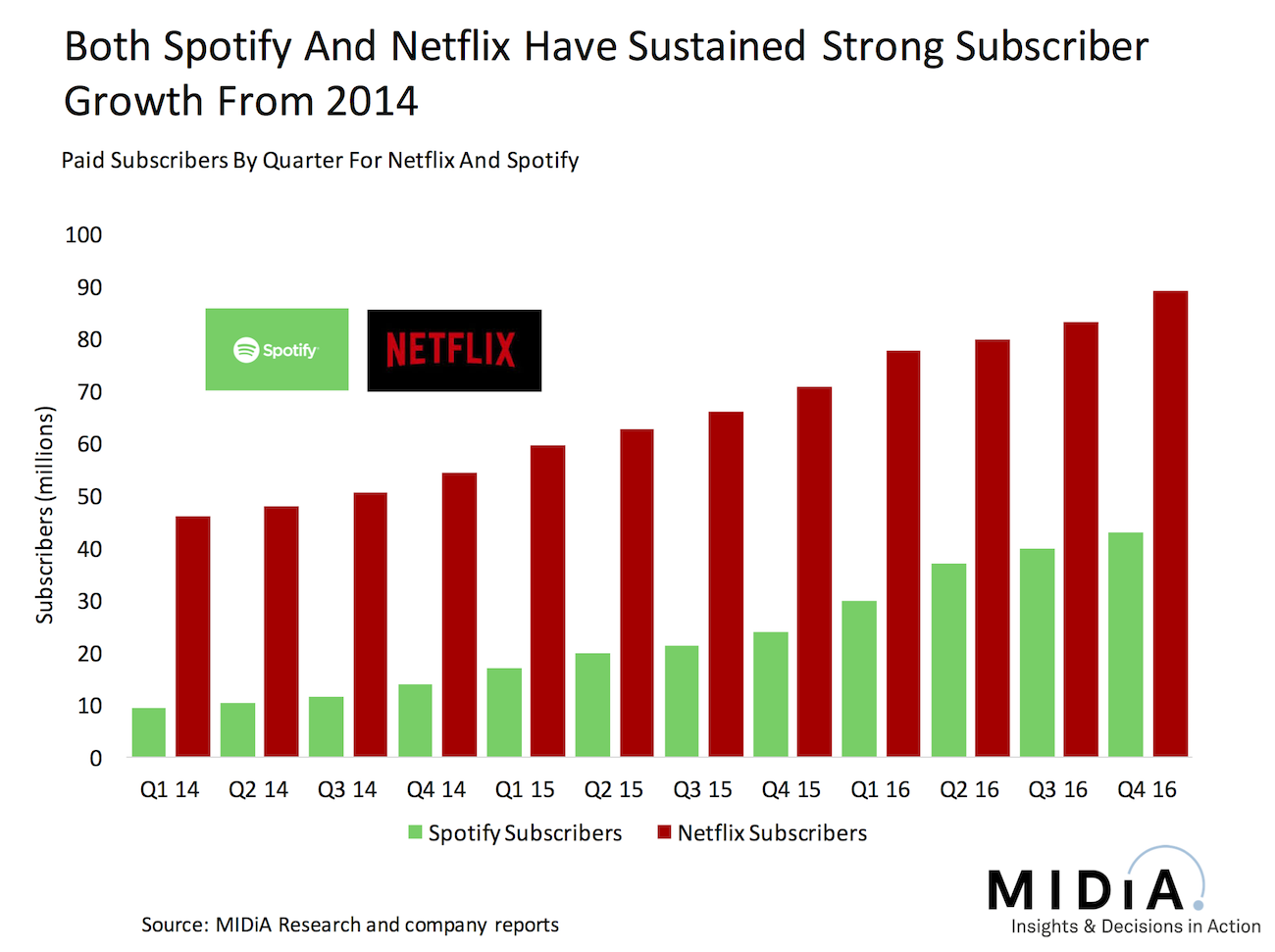 Having just celebrated its 10th (streaming) birthday, Netflix followed up with a strong earnings release, announcing 5.8 million net new paid subscribers in Q4, sending its share price up by 9%. This wraps up a stellar year for Netflix, one in which it doubled down on original programming and delivered acclaimed hits such as Stranger Things and The OA, shows that don’t fit the traditional TV mould. In fact, Stranger Things was turned down by 15 TV networks before finding a home at Netflix and The OA’s oscillating episode lengths (from 1 hour 11 mins to 31 mins) would have played havoc with a linear TV schedule (not even considering its mind bending plot).

Netflix closed 2016 with 89.1 million subscribers and the temptation to benchmark against Spotify’s equally strong year is too strong to resist. Spotify (which celebrated its decade in June 2016) closed the year with around 43 million subscribers, 48% the size of Netflix. But a closer look at the numbers tells another growth story.

In terms of net new subscribers (i.e. how many more paid subscribers there were at the end of the year compared to the year before) Spotify added just under a million more subscribers than Netflix did in 2016. This is the first time that Spotify’s growth has exceeded Netflix’s (in absolute terms, not percentage terms). While Netflix’s 5.8 million net new subscribers in Q4 2016 was impressive, it followed two much smaller quarters (2.2 million, 3.4 million) and its average quarterly growth for 2016 was 4.6 million. Spotify’s growth by contrast was much more consistent, and higher, averaging 4.8 million. (Note that Netflix reported 7.1 million net new subscribers, however this includes 1.2 million trial subscriptions).

In way of context, Netflix’s core territory (the US) is nearing saturation, adding just 14 million net new subscribers in Q4 2016. The US now accounts for 54% of Netflix’s growth. So Netflix has a more mature user base than Spotify’s. However, Netflix is aggressively pursuing international growth and it has acquired debt to do so. It raised $400 million in 2014 (largely earmarked for European expansion) and a further $1 billion in 2016 (to fund originals and international growth – including international originals and programming). When Spotify raised an additional $1 billion it sent shockwaves through the music industry. When Netflix did it, the TV industry’s reaction more closely resembled gentle (albeit concerned) ripples. Another interesting music / video comparison: in response, Amazon announced it was expanding to 200+ additional markets to its existing 5 in December. Very reminiscent of Deezer’s 200+ markets roll out in response to an increasingly competitive Spotify back in 2011.

One of the festering wounds of the streaming music business is commercial sustainability. All the key streaming services are either losing money or are part of a bigger company (which absorbs the losses). Netflix, by contrast, posted an 18.5% streaming margin for 2016. Content is the biggest cost for Spotify and co, but interestingly they are in line with Netflix’s content costs. Looking at Netflix (FY 16), Spotify (FY 15) and Deezer (H1 15) content costs as a % of revenue is broadly similar. Deezer’s costs are lower as a share, reflecting the fact that so many of its ‘subscribers’ were inactive during the period (53% of the total).

So why can Netflix achieve an 18% streaming margin, yet Spotify -9% and Deezer -12%. (Note: Netflix reported a 20% overall margin, but this includes the much higher margin legacy DVD rental business). The reason for the difference between music and video streaming quite simply boils down to the way content costs are structured. Minimum Revenue Guarantees (MRGs) are a key factor for streaming music services, as this entails the services guaranteeing to pay for anticipated subscriber growth. If they miss the numbers they still pay, but even if they hit them it means they are always paying against tomorrow’s numbers, not today’s, which is damaging on a cash flow basis. The variance can be highly unpredictable. Deezer wiped off 85% of its gross operating margin in 2014 (compared to 2013) with ‘unused minimum guarantees on rights’.

Free users also add a significant rights burden to freemium music services and dilutes revenue. Thus Spotify’s revenue subscriber is $75.73 compared to $99.03 for Netflix, despite it having a $9.99 price point compared to Netflix’s $7.99.

But the main reason for Netflix’s stronger position is that it owns so much of its content, while Spotify and co rent their content. This means that Netflix is able to employ a series of sophisticated accounting techniques to make the company more profitable. Netflix’s original shows are a balance sheet asset and so can have costs amortized and offset to help profitability. (eg Netflix has a cash flow line item 'Amortization of streaming content assets' for +$4.8 billion).

So where does this all leave us? Who is the winner? Music or video? Spotify or Netflix? Fundamentally both services are growing at impressive rates and have much to be proud of with regards to their respective 2016 performances. Overall, business dynamics are broadly similar, but Netflix’s original content strategy is delivering it a competitive advantage, both in terms of being able to differentiate and in terms of accounting. Of course, the music and TV businesses are dramatically different and Spotify cannot simply ‘do a Netflix’. Nonetheless, Netflix builds a compelling case for original content strategy. The record labels are undoubtedly wary of streaming services becoming record labels themselves, but this might just be Spotify’s route to profitability.

Richard
27 Jan 2017
Sorry, but that chart graphic in the middle simply doesn't add up. Either it's wrong, or really badly worded. Netflix has 82% costs as percentage of revenue, but 83% content costs as percentage of revenue? That makes no sense. How can one sub-component of overall costs when measured against the same base figure (total revenue) be higher than all costs measured against the total revenue? Still, assuming the subscriber details are accurate, essentially the biggest point we're talking here is economies of scale - Netflix has over double the number of subscribers of Spotify.
Angela
24 Jan 2017
How does user consumption dynamics impact this if at all? The original content strategy is a clear winner but users typically consume video content once (you watch a movie or series once or twice) while music generally can be consumed countless times. Will this impact saturation levels? Internationalization is clearly the most natural option, but would netflix enter the music space as a one-stop shop for entertainment?
Wil Forbis
23 Jan 2017
I'd say there's one other distinct advantage Netflix has. None of their content is available from some other source for free. With Spotify however, much of what they offer is on youtube.
David Porter
23 Jan 2017
One other thought: while the cost of Spotify's free tier reduces ARPU, it's likely a necessary near-term investment to create switching costs and lock-in, which is especially important for a music service in particular since one listens to music time and again and builds collections and preferences (vs video content, which is generally watched just once, so less reason to stick around as you're not leaving much behind).
David Porter
23 Jan 2017
Great post Mark, very enlightening. I reckon you're spot-on in that Netflix's investment in original content is simply amortized (and with no "middleman" margin) at a flat amount per month, irrespective of subscriber consumption. I suppose this may be true for Spotify too though right now, as I'm not sure they reach the magnitude of streaming necessary to outpace their MGs. I do think that the similar content costs (as %) suggest that Spotify could in fact one day be profitable, which is something I'd long thought unlikely. Seems that at some scale this could happen, even if that scale proves larger than Netflix' breakeven point (in terms of subs).
Mark Mulligan
21 Jan 2017
It's not misleading. These are the underlying economics of what has been needed to make streaming music subscriptions work (without these trials conversion would fall off a cliff). Also, as I indicated, the impact of free brings revenue per sub down, again part of the underlying economics of music streaming that do not affect Netflix.
Will Buckley
21 Jan 2017
Hold on a minute. The comparison is misleading because Spotify continually uses heavily discounted subscription deals, i.e. $.99 for three months, sometimes with extended monthly discounts, while Netflix does not.
Paul Odongo
20 Jan 2017
appreciate all the insights you have been giving through out the years Mark,but we keep comparing music consumption to movies,yet they are very different so that means content rights will also be different,Netflix's strategy and business model will not work of Spotify. imagine the rights costs that ITunes has with its busness model ,i bet they where less than what spotify pays. Try including that in your stats.
Lucas Gonze
19 Jan 2017
Insightful as always, Mark. The question is whether Spotify's label deals permit it to hold back royalties for content which it owns. First, because its minimum payments per subscriber may be more than royalties owed. Second, because rights holders may be able to use their equity to prevent Spotify from entering into competition. (And current contracts may also prohibit that).
Gigi Johnson
19 Jan 2017
Netflix since its early days has benefited from shaping its customers' experiences toward its less-current content. It originally was as "simple" as creating psychographic profiles and nudging you toward older content. Music older content? Same rates. Owning the new original content now for Netflix is expensive fixed costs upfront, but lets them continue to drive profitable growth in terms of new subscribers into a competitive system. I agree that it isn't one price for all, and that really helps. [very long-time Netflix stockholder as well]
Mark Mulligan
19 Jan 2017
Hi Colin - yes, great point, agree scale is super important, but from a rights perspective Netflix's content costs benefit from scale (partially fixed costs) Spotify's do not (fully variable costs). Mark
Colin Finkelstein
19 Jan 2017
Mark, Great post as always.... would scale also not play a huge role - Netflix has $6b more revenue - when Spotify grows and in my opinion it will see significant growth, this will have a huge impact on margins... Colin