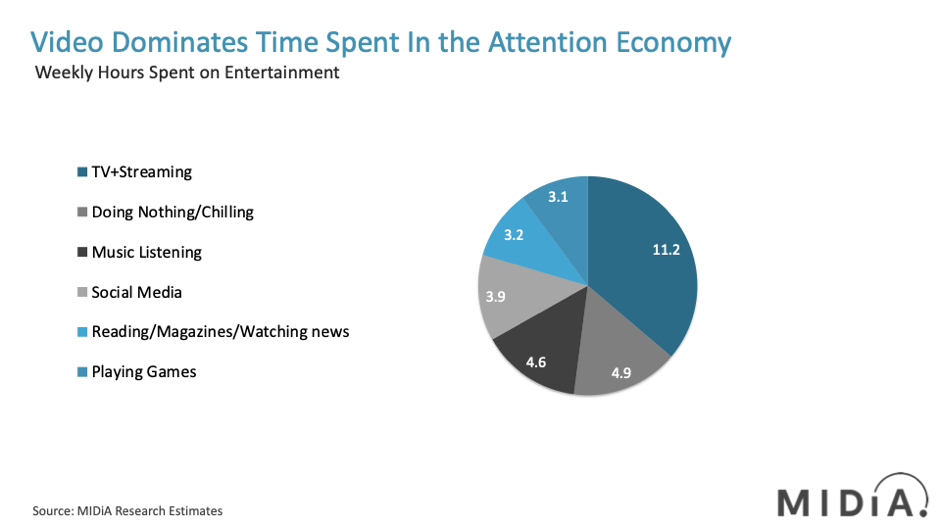 The CD brought unprecedented growth in music-as-product. Then Napster came along as the first real digital disruptor and burst that bubble very effectively. iTunes then disrupted Napster (partly alongside industry anti-piracy efforts) by legally unbundling and re-aggregating music in digital libraries and cool new devices. Symbolically, that era is all but done. The CD, Napster and iTunes were massive changes, but the structure of the industry stayed the same (with the exception of manufacturing and physical distribution).

Then came streaming. Truly disruptive? Up until now, one could argue that even streaming hasn’t been disruptive to industry structure in the same way Amazon/Uber/AirBnB have been in their respective sectors. The streaming platforms have agreed to play to the labels’ tune, and pay the industry going rates, even if not everyone is happy about what those rates are. Indeed, the boom times are back in a way almost comparable to the CD era – almost.

More than a dozen years since the first commercial streaming services came to market, it seems a tipping point has arrived. Three particular trends indicate this:

Explosion in the volume of supply

With 40,000 tracks being uploaded to Spotify daily and music distribution effectively barrierless, it is little wonder that the consumption share of the top 200 artists is being slowly reduced on streaming platforms. At this point in time the main focus for labels remains share of streaming – driving more signings, more artists and more releases. This is all being squeezed into a pipe with a pretty narrow head.

The fact that the major labels are signing more artists comes as no surprise (a Rolling Stone article earlier this year estimated that, between them, the three majors are signing two artists a day, which we think might be conservative). Scaling artists is one way to make the label model work in the abundant streaming world. Acquiring/creating indie distributors, label services and boosting the artist roster is also the route-one defence mechanism against disintermediation.

The labels then, must split their capabilities between marketing larger numbers of songs at scale and continuing to nurture artists for the longer-term.

To some extent, the biggest disruptive battle in this ever-increasing supply is songs versus artists. Sound ridiculous? It isn’t – it is at the heart of what changing consumption and distribution habits mean for the economics of the music industry, and what it means to make a living as a professional artist. If you come up with a great song, your biggest priority is imbuing that song with longevity. In a business built on ever-increasing song volumes, that is not easy.

Songs aren’t enough to sustain any one party in the industry (with the exception of publishers, perhaps). Think about it. Spotify has already decided that songs won’t move the needle much more on increasing consumption time – no matter whether it’s superstar artists or anonymous studio composers. Podcasts and other propositions will drive consumption time. Over at the labels, songs cannot replace the album unit in economic terms, especially when streaming has effectively removed any notion of product, packaging, or bundling. But the song also does not the artist make.

While the absolute number of streams is still rising, a looming problem for music remains somewhat hidden. That problem is music’s overall share of the attention economy. As Spotify accelerates the strategy towards non-music podcasts (the move sits within its overall goal of increasing overall engagement – simply capturing more of each user’s time) the wider challenge isn’t for the top artists, but for music overall, and how it can compete in the entertainment part of the attention economy that sees video, e-sports and podcasts all on the rise.

At the same time, label bosses are starting to think more like TV bosses – asking how music can occupy not just more time and attention, but a greater share of the culture. The recent increase in music filmed content is one example of how this can be addressed. In one case – namely Queen – it has been a spectacular success. Queen has risen over 100 places in the Spotify rankings in around two years. Queen is top of MIDiA’s fandom ranking. Who would have thought, five years ago, that was even possible? (New movie idea: imagine we live in a world where Queen faded into the nostalgia circuit, and Brian and Roger persuaded John Deacon to re-join to audition any number of pub singers or indeed Freddie lookalikes).

Queen is not the only legacy artist to grow its franchise successfully. Bruce Springsteen released his 19th studio album earlier this year, ‘Western Stars’. It turns out that this wasn’t just an album, but the soundtrack to a movie. And ‘Western Stars’ itself is very much a concept as well as a change of direction artistically. This is the new model: to integrate and maximise all of the creative outputs into one larger whole.

Music in other forms – from UGC videos on TikTok to Stickers on Instagram – is a growing part of music’s overall share of consumption. We see a continued increase in music visual formats and subsequently another challenge to measure just how these formats are commercialised.

The real growth opportunity for labels is representing artists and talent across a wider range of projects, whatever these may be – songs, albums, podcasts, videos, art, clothing lines, comedy side-lines on Instagram and what-have-you. All of these ‘projects’ require representation and, ideally, integrated marketing communications. While artists are the ones with the choices, they also have all the challenges. Which career phase do they focus on first? How do they get started? How do they build their networks and audiences and then move onto the next phase? How do they take their fans with them?

Who is best at helping artists navigate these choices – making decisions that are in the artist’s interest first and foremost? Whether the answer is labels, label services companies, management companies or talent agencies, these representatives are the ones that will continue to fundamentally succeed as the music industry’s trading currencies keep on changing. In a recent Billboard piece on songwriters, Gabe Saporta was quoted thus:

“People like songs, but they fall in love with artists”.

This underpins the central business model for labels and ultimately the greatest defence against disintermediation.

The third trend is a leading indicator of major change. The streaming platforms are beginning to diverge in terms of content strategies, and for the major global leaders music isn’t enough on its own for them to achieve their ultimate commercial goals. Spotify is growing its non-music audio business and expanding into creator services, while Apple is moving towards a holistic content offering and expanding its Beats brand. YouTube continues to expand its reach to a broader set of global creators. Amazon continues to expand music behind its Alexa range, but has also quietly commissioned a few music and podcast exclusives.

With the streaming video on demand (SVOD) business in a big bang moment, driven by exclusive or original content, it is possible that we are seeing the beginnings of another exclusives battle in music – albeit one more expansive than the previous exclusive Apple Music album windows that so frustrated Spotify back in 2015/16. Original programming on radio, original podcast shows, live and exclusive sessions and, yes, some newly minted songs, are quietly making exclusives a differentiator. We are already seeing this happen in India and China with the music streaming services there. As with monetising fandom, a major trend for 2020 will be what the major, more established music markets learn from the faster growing, faster moving markets in Asia, Latin America and Africa.