Spotify, the Decline of Playlists and the Rise of Podcasts 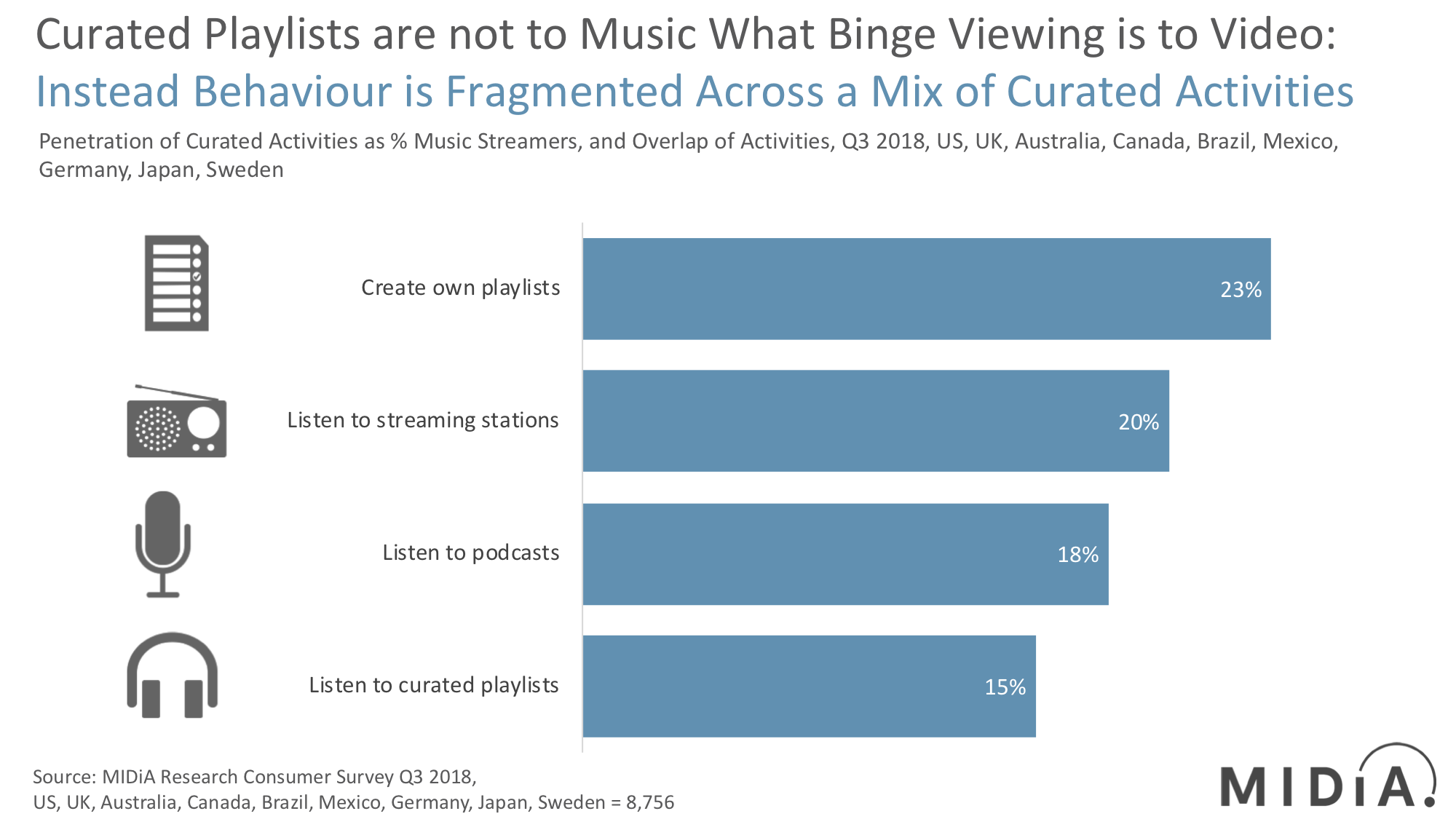 The following is a small excerpt from MIDiA’s forthcoming third edition of its ‘landmark State of the Streaming Nation’ report. For more information about this report email stephen@midiaresearch.com

Most things that Spotify does are scrutinised and cross-examined within an inch of their lives, with vested interests trying to second guess what may be the intended or unintended consequences for them. Most actions are viewed through the disruption lens i.e. how will this hurt or compete with Spotify’s rightsholder partners? The streaming market is of course so much more than just Spotify, but the company acts as a lightning rod for the wider market and most often sets the strategic agenda.

Two of Spotify’s most significant moves have been playlist curation and podcasts. Spotify is moving into the second major phase of its existence. Phase 1 was about establishing itself as a streaming music powerhouse, Phase 2 is about what it becomes next, extending beyond the streaming music beachhead. This is the typical trajectory of tech companies, establishing themselves in their core competencies and then expanding. This can either be a dramatic expansion – e.g. Amazon moving from eCommerce into video and music – or a more focused value-chain extension – e.g. Netflix moving from simply streaming other’s shows to making its own. For Spotify, playlists were a Phase 1strategy and podcasts are very much part of Phase 2.

‘But wait’ I hear you ask, ‘that doesn’t make sense, look at all these streams we’re getting from playlists’. The key factor here is the difference between the number of playlist users and the number of playlist streams. Playlists over index in terms of contribution to streams. With dozens of tracks per list, lean-back playlist listening can easily generate more streams per user than lean-forward listening. Thus, we have one of the great emerging paradoxes of streaming: passive audiences can generate more streams, and thus rightsholder pay outs, than engaged, aficionados. However, a word of caution, should casual playlist listening become large enough, then the net result will be a dilution of the royalty pool and thus diminishing per stream rates.

Perhaps not the holy grail of promotion

A few years ago, playlists looked like the future of artist marketing, now they are looking a bit like a busted flush. They may be great at generating streams but are not so great at building an artist’s story. The near-obsession with Spotify playlists in label marketing strategy reflects the fact that most record label executives use Spotify and thus often have a Spotify-centric (and therefore playlist-centric) worldview. But labels are now beginning to question the artist ROI of playlists. The growing adoption among casual listeners only compounds matters and means that a playlist ‘hit’ does not necessarily do much to help long-term artist brand building. To put it simply: a playlist is not a shortcut to cultural relevance.

Podcasts could be bigger than streaming

Enter stage left podcasts. With its acquisitions of Gimlet, Anchor and Parcast, Spotify is betting big on podcasts. Already, more streaming users (18%) listen to podcasts than curated playlists while overall consumer podcast penetration is 11%. In Sweden – the early adopter market that gives us a view of where other markets are heading – podcast penetration is 19%, rising to 28% among streamers. Podcasts are a Netflix moment for radioand may even have the potential to be bigger than streaming music (US radio ad revenues alone are $16 billion). Right now, the growth in overall podcast audiences is fairly slow, but engagement is accelerating as are content creation, monetisation and distribution. It is not entirely inconceivable to think that five years from now, podcasts could be a bigger business for Spotify than music. Certainly, creators could be making much more money, even now.

While it remains more likely that music will be the core of Spotify’s business half a decade from now, all the early indications are that Phase 2 will mean a degree of diversification of user experience, business model and revenue stream, with podcasts at the vanguard. Playlists are not dead, but nor are they the golden child anymore.