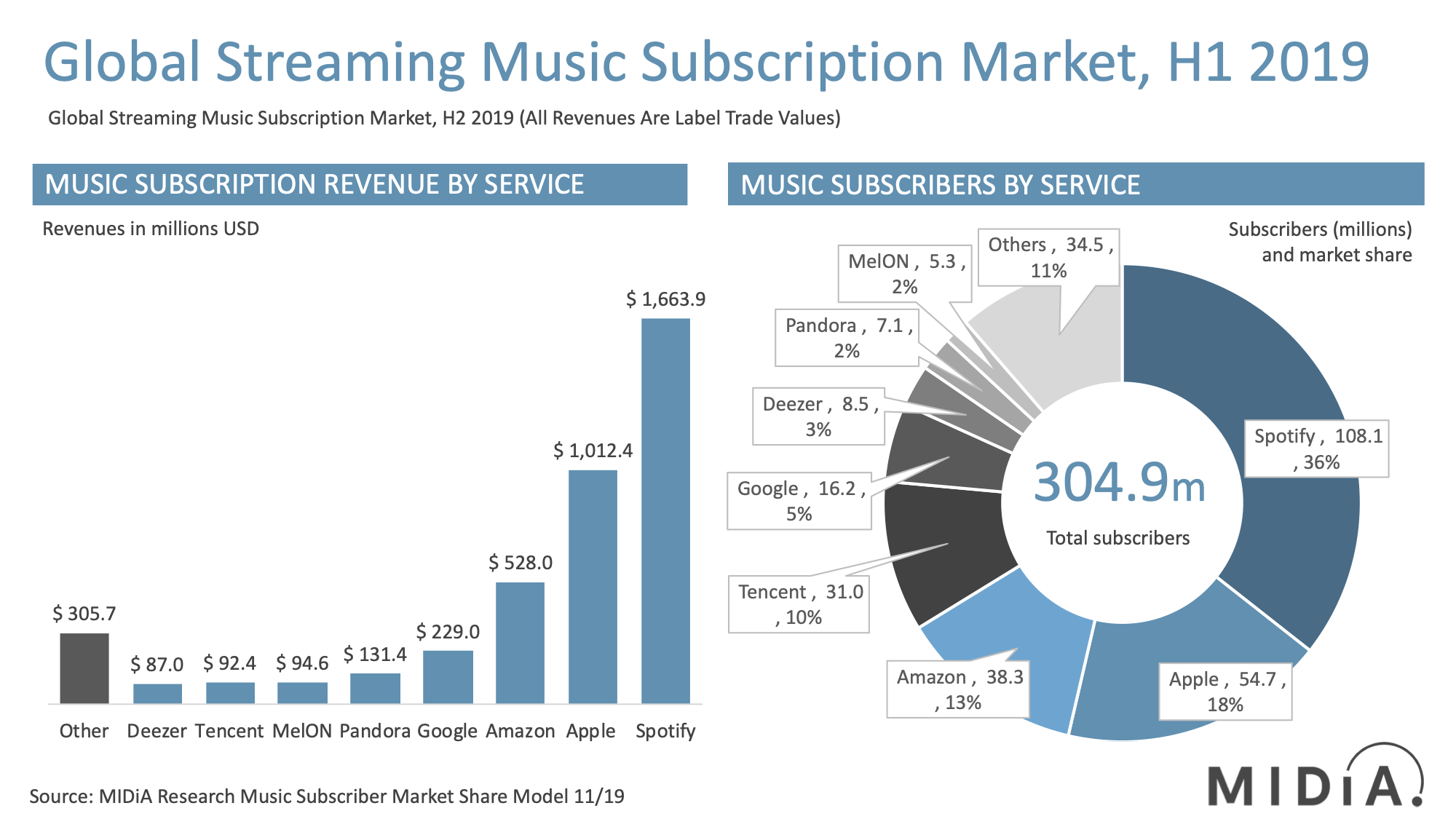 The global streaming market continues to grow at pace. At the end of June 2019 there were 304.9 million music subscribers globally. That was up 34 million on the end of 2018, while the June 2018 to June 2019 growth was 69 million – exactly the same rate of additions as one year earlier.

Spotify remained the clear market leader with 108 million subscribers, giving it a global market share of 35.6%, exactly the same share it had at the end of 2018 and at the end of 2017. In what is becoming an increasingly competitive market, Spotify has continued to grow at the same rate as the overall market.

Google has been another big gainer, particularly in recent quarters following the launch of YouTube Music, going from just 3% in Q4 2017 to 5.3% in Q2 2019. Google had a well-earned reputation for being an under-performer in the music subscriptions market, a company that did not appear to actually want to succeed. Now, however, Google appears to be far more committed to subscriptions, pushing both YouTube Premium and YouTube Music hard, with a total of 16.9 music subscriptions in Q2 2019, compared to just 5.9 million at the end of 2017.

With the big four all gaining market share, the simple arithmetic is that smaller players have lost it. The share accounted for by all other services fell from 32.8% end-2017 to 28.4% mid-2019. This of course does not mean that all of these services lost subscribers; indeed, most grew, just not by as much as the bigger players. Of the other services, most are large single-market players such as Tencent (31 million – China), Pandora (7.1 million – US) MelOn (5.3 million – South Korea) with Deezer now the only other global player of scale (8.5 million).

In summary, 2019 was a year of growth and consolidation, with the global picture dominated by the big four players and Spotify retaining market share despite all three of its main competitors making up ground. 2020 is likely to be a similar year, though with a few key differences:

These figures and findings are taken from MIDiA’s forthcoming Music Subscriber Market Shares, which includes quarterly data from Q4 2015 to Q2 2019 for 23 streaming services across 30 different markets. The data will be available on MIDiA’s Fuse platform later this week and the report will follow shortly thereafter.

If you are not yet a MIDiA client and would like to know how to get access to this report and dataset, email stephen@midiaresearch.com

by Mark Mulligan
28 Apr 2020
Tomorrow (Wednesday 29 th April) Spotify announces its Q1 2020 results, at which point we will find out whether it had a COVID-bounce like Netflix did ( adding 15.8 million subscribers in Q1 ) or whether...

by Mark Mulligan
5 Mar 2020
With IPOs from Warner Music and Universal Music pending and continued institutional investment into music catalogues, the music business is firmly in the sights of big money. The performance of the recorded...

by Mark Mulligan
12 Jun 2020
While doing some research on the Chinese streaming market I came across this fantastic UX tear down of Xiami Music . I recommend you read it in full. The day before I found this–also must-read–article...
No thanks