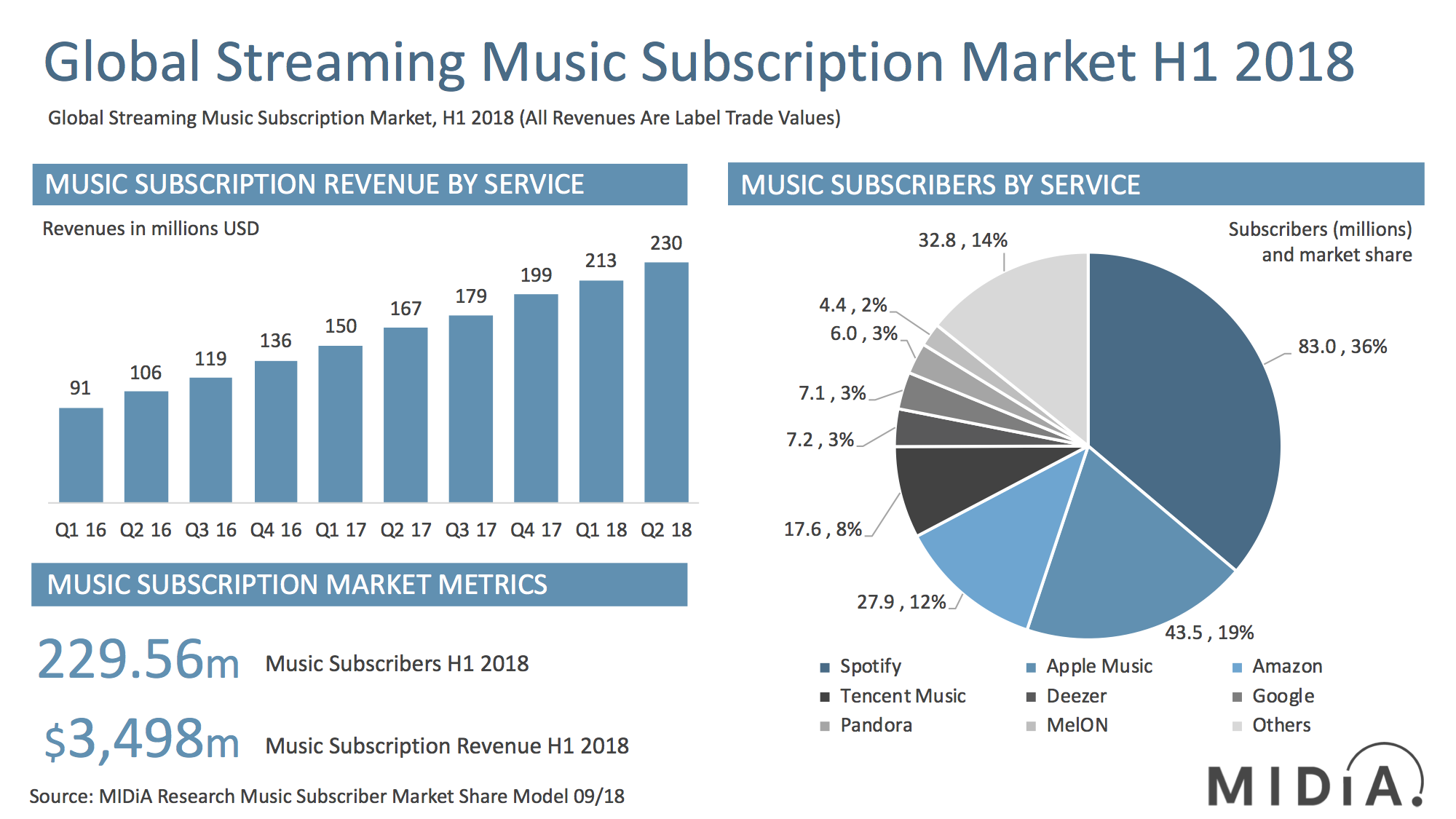 Music subscribers grew by 16% in the first half of 2018 to reach 229.5 million, up from 198.6 million at the end of 2017. Year-on-year the global subscriber base increased by 38%, adding 62.8 million subscribers. This represents strong but sustained, rather than strongly accelerating, growth: 60.8 million net new subscribers were added between H1 2016 and H1 2017. This indicates that subscriber growth remains on the faster-growth midpoint of the S-curve. MIDiA maintains its viewpoint that this growth phase will last through the remainder of 2018 and likely until mid-2019.

This will be the stage at which the early-follower segments will be tapped out in developed markets. Thereafter, growth will be driven by mid-tier streaming markets such as Japan, Germany, Brazil, Mexico, and Russia. These markets have the potential to drive strong subscriber growth, but, in the case of the latter three, will require aggressive pursuit of mid- tier products – including cut-price prepay telco bundles, as seen in Brazil. Without this approach, the opportunity will be constrained to the affluent, urban elites that have post-pay data plans and credit cards. These sorts of products though, will of course deliver lower ARPU in already lower ARPU markets. All of this means: expect revenue to grow more slowly than subscribers from mid 2019.

The key service-level trends were:

The mid-term report card for the music subscriptions market in 2018 is strong, sustained growth with a similar second half of the year to come.

Mark Mulligan
5 Apr 2019
It does not include YouTube Music, but that number was negligible in 2018
Keana
5 Apr 2019
What is included when talking about google? Is it just google play music or dies it include YouTube music?
Mark Mulligan
24 Sep 2018
Yes it is in there, but tiny.The subscriber base for Indian services is very small. Free user base strong, but not paid
Charbel Khawand
21 Sep 2018
Is the Indian market included? You don't mention it when talking about the growth.
Pavan
17 Sep 2018
The first chart needs a o say Subscribers instead of subscription revenue to align with the narrative. Good analysis!
No thanks