Is sci-fi about to have its Game of Thrones moment? 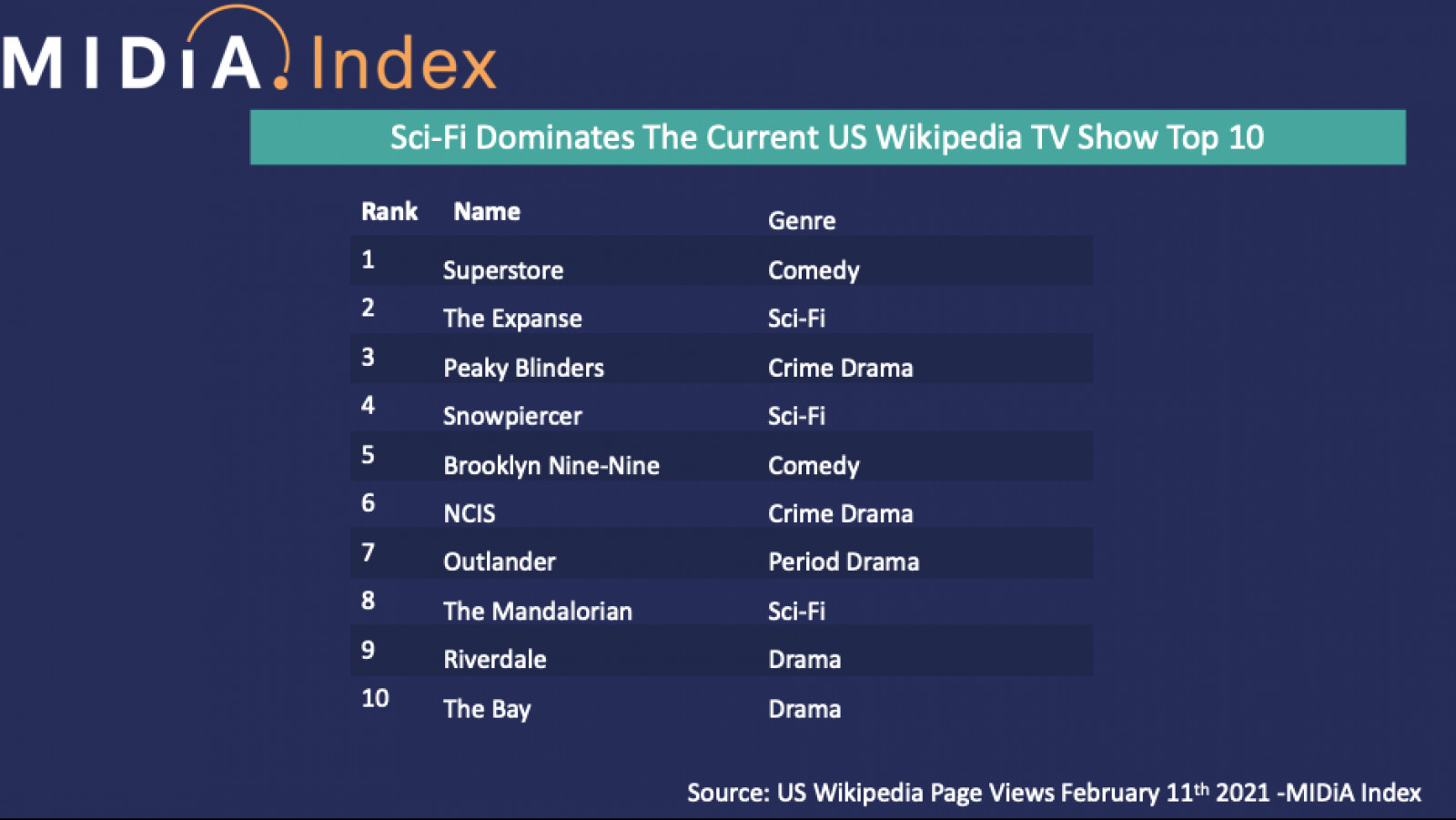 We are only just into the second month of 2021, and already the TV engagement landscape environment is starting to transform into something distinctly different from 2020. The sci-fi genre, long seen as a category with niche TV appeal (in much the same way fantasy was up until 2010), has suddenly come to the fore among US audiences.

Out of the top ten most viewed TV show Wikipedia pages over the preceding 24 hour period (February 10th-11th 2021), 30% are sci-fi, the single biggest category. Wikipedia page views are a strong proxy for interest in TV shows, as a decision made to view a Wikipedia page is deliberate rather than accidental (i.e. typing in a word in a google search, which may correspond with a show title yet be unrelated such as frontier etc.). Individuals taking the trouble to research the cast members, set locales, backstory etc. of a show on Wikipedia have expressed a strong interest, which is more likely to lead to a viewing outcome – as opposed to merely liking a show’s Facebook page, for example. 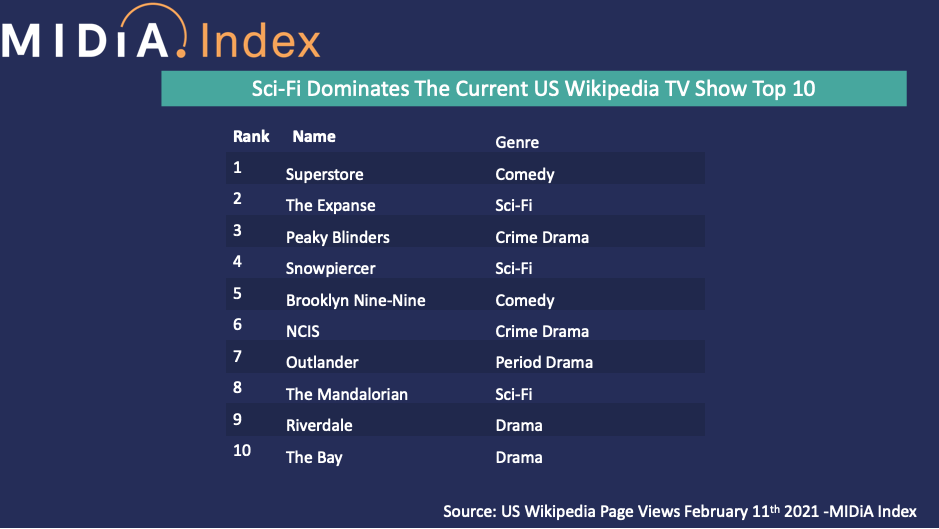 Is sci-fi the new fantasy?

10 years ago, the fantasy genre was relegated to the category of niche audience appeal. It was seen as slightly too esoteric and involved for mainstream audiences. Therefore, it was deemed not worth the production and marketing investment being afforded by studios and networks to mainstream four quadrant programming (appealing to under 25s, over 25s, males and females). Then HBO decided to commission an adaption of A Song of Ice and Fire; a series of fantasy novels by George R. R. Martin, the first of which is A Game of Thrones. The series premiered on HBO in April 2011, beginning a 73 episode franchise which concluded eight seasons later in May 2019. HBO transformed a niche proposition into a mainstream hit through a combination of production savvy (a high calibre proven production team, and a mixed cast of new talent and seasoned actors), marketing expertise… and yes – luck.

At the heart of the TV industry resides the uncomfortable truth that commissioning hits remains as much an art as a science. So many moving parts come into defining how an audience will receive a finished product and how far that appeal will reach. Like the world of venture capital, the hits business expects a 90% failure rate to lead to 10% success that covers the costs of the flops and generates a healthy margin.

Could TV be at another cultural tipping point where a niche genre comes to the fore once again? After all, we have been here before; prior to Game of Thrones (GoT), there was the Lord of The Rings; before the Mandalorian, there was Star Wars. Or are we moving beyond the need to generate unifying mass-entertainment moments? After all, the final season of GoT – which saw simultaneous linear and streaming broadcasts of each episode – is unlikely to ever be repeated with the same reach and impact, for the simple reason that linear TV weekly active use has moved from the mainstream in 2019 to having a lower penetration than binge viewing in Q4 2020. Audiences now control their own cultural destiny in asynchronous isolation, creating bubbles of fandom. Shows no longer need to be mainstream to generate a meaningful return on investment for streaming services able to super-serve the global long tail of fandom.

So, while sci-fi is now having its moment, its success will be siloed and fragmented, echoing the distributed audience world of the 21st century digitally-powered entertainment landscape. Show success now is thus fundamentally different to show success 10 years ago.

by Hanna Kahlert
26 Jan 2021
Being a music artist is no easy feat these days. Labels are struggling to cut through the clutter of content proliferation, pushing artists to shorten songs, forgo the album, and prioritise playlist placements…

by Keith Jopling
20 Jan 2021
Marketing Long Read Part 1: Catalogue & Song Management It will not have escaped your attention that music catalogues are changing hands for serious sums of money. The race to acquire the songwriters’…