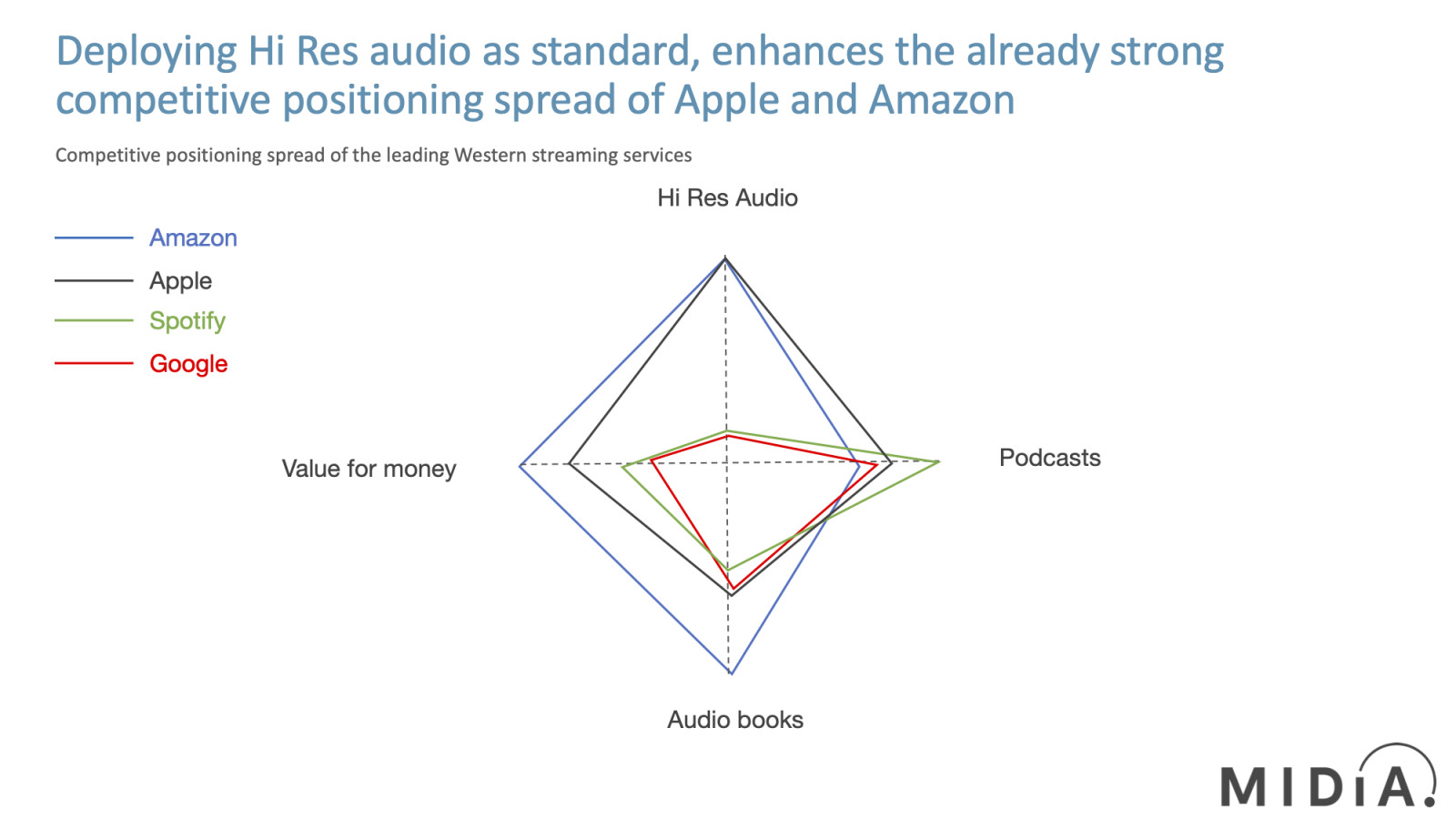 Apple and Amazon made a splash this week by integrating Hi-Res Dolby Atmos audio into the basic tiers of their streaming services. The timing, i.e. just after Spotify started increasing prices, is – how shall we put it, interesting. It also struck a blow against the music industry’s long-held hope that Hi-Res was going to be the key to increasing subscriber ARPU. While that might be true, for now at least, the move is an inevitable consequence of two streaming market dynamics: commodification and saturation.

Music streaming contrasts sharply with video streaming. While the video marketplace is characterised by unique catalogues, a variety of pricing and diverse value propositions (including a host of niche services) music streaming services are all at their core fundamentally the same product. When the market was in its hyper-growth phase and there were enough new users to go around, it did not matter too much that the streaming services only had branding, curation and interface to differentiate themselves from each other. Now that we are approaching a slowdown in the high-revenue developed markets, more is needed. Which is where Hi-Res comes in.

Now that streaming is, as Will Page puts it, in the ‘fracking stage’ in developed markets, success becomes defined by how well you retain subscribers rather than how well you acquire them. As all the key DSPs operate on the same basic model, they need to innovate around the core proposition in order to improve stickiness and reduce churn. Spotify started the ball rolling with its podcasts pivot, but the fact that its podcasts can be consumed by free users means it is not (yet) a tool for reducing subscriber churn.

On top of this, when podcasts are mapped with other positioning pillars, Spotify’s competitive differentiation spread is relatively narrow. Because Apple and Amazon now both have Hi-Res as standard, they not only boost audio quality but value for money (VFM) as well. Bearing in mind, both companies already scored well on VFM because they have Prime Music and Apple One in their respective armouries.

It is Amazon, though, that looks best positioned of the four leading Western streaming services. In addition to audio quality and VFM, it is building out its podcasts play (as compared to the Wondery acquisition) and it has the potential to bundle in the world’s leading audiobook company, Audible. Given that spoken-word audio consumption grew at nearly twice the rate music did during 2020, being able to play in all lanes of audio will be crucial to competing in what will become saturated streaming markets.

Finally, Dolby Atmos is more than simply Hi-Res audio; it is an immersive format that enables the creation of spatial audio experiences. If we are truly on the verge of a spoken-word audio revolution, then immersive audio may have a central role to play. Surround sound has been a slow burner for home video, but that may be because the video experience itself has improved so much (bigger screens, HD, more shows than ever) that the audio component has been less important (though the growing soundbar market suggests that may be beginning to change). However, in audio formats there is only the audio to do the storytelling. This could mean that tools like immersive audio become central to audio storytelling, which means, you guessed it, Amazon and Apple would then have a competitive advantage in podcasts and audiobooks that Spotify would not.

by Srishti Das
9 Apr 2021
The Indian Performance Rights Society (IPRS) finally controls the majority of publishing market share in India, after the mammoth music label and film production company T-Series registered itself as a...

by Kriss Thakrar
13 Apr 2021
Social media platforms have spent the past decade redefining what it means to be a visual creator. They are now on the cusp of doing the same with music. TikTok has announced a wave of new features , including...

by Mark Mulligan
7 May 2021
The pandemic-defined 2020 was an outlier year across digital entertainment, with the  extra 12% of time consumers spent with entertainment boosting everything, including music.  One of the effects was...
No thanks