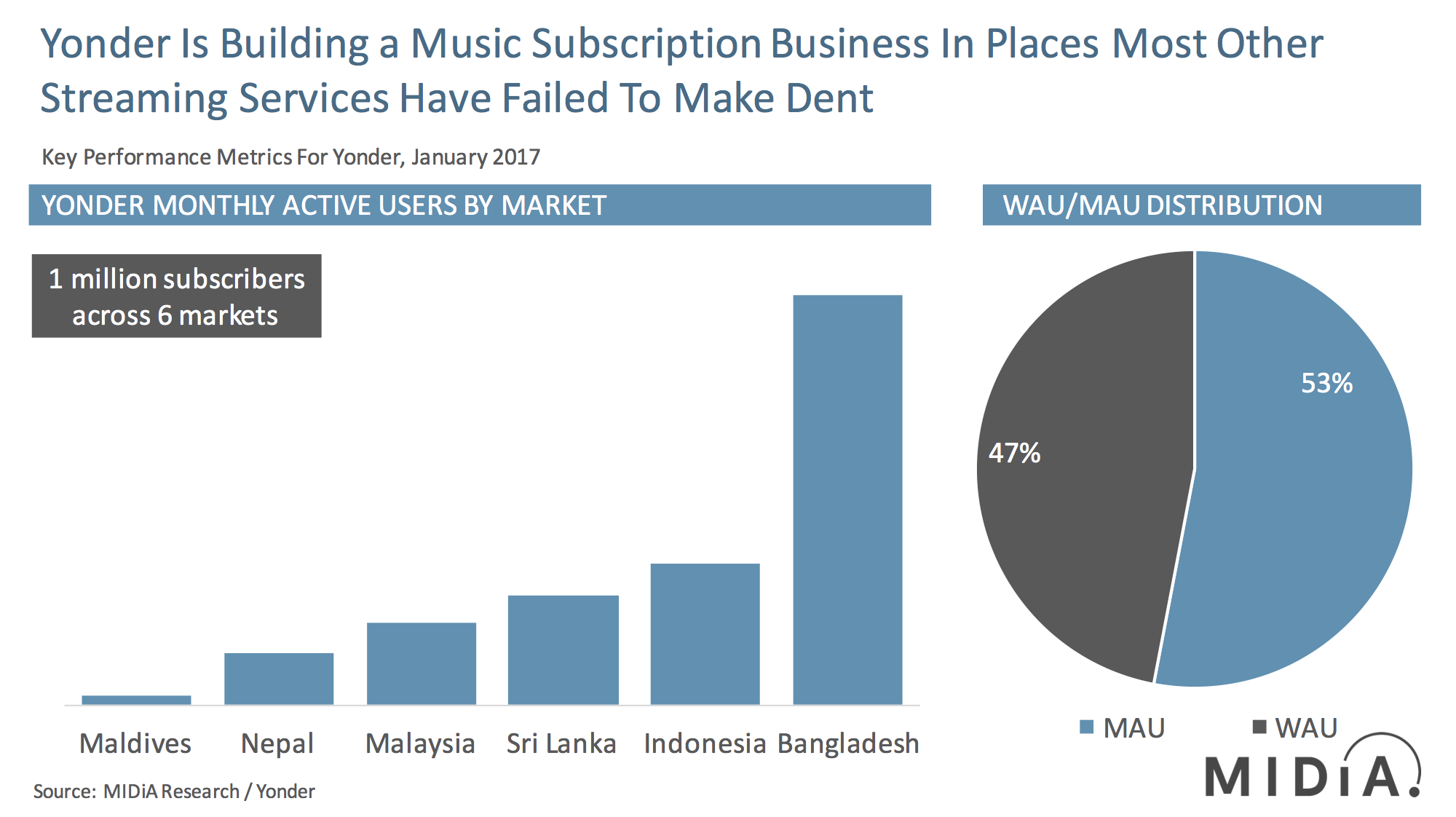 Back in 2012, a music service that had raised $174 million in funding closed without yet having launched to consumers. That service was Beyond Oblivion, a company that intended to transform the music market with music bundled into handsets and phone packages at no extra cost to consumers. Five and half years later, Beyond Oblivion’s founder is finally seeing his latest iteration of the bundled music service model gain traction. Yonder, his new(ish) company, has started off 2018 with a million monthly active users (MAUs) under its belt, with the majority of that growth coming in the fourth quarter of 2017. Yet Yonder is not on many people’s radar, in large part because it is building its business in markets that are off streaming’s beaten track. Yonder’s main market is Bangladesh, which makes up just over half of its MAU base, followed by Indonesia and Sri Lanka. It even has tens of thousands of users in Nepal and the Maldives and plans to roll out to markets such as Myanmar, Cambodia, Iraq and Ghana in 2018. These are not markets famed as booming digital music markets, and they’re certainly not priority markets for any of the top streaming services. So, in many respects Yonder is competing around, rather than with the likes of Spotify.

But there is more to it than just that. These are markets with mostly large populations and very low GDP per capita and mobile ARPU. In many of these territories mobile ARPU is significantly lower than the cost of a western streaming subscription. For example, total mobile ARPU in Bangladesh is around $4 a month. This makes fitting the economics of a streaming music bundle into a tariff challenging in the extreme. The standard wholesale tariffs record labels provide streaming services in these regions struggle to fit these wafer thin margins. So, making music bundles work needs a very specific and localized approach. The same principle applies to localization, with music programming requiring a much higher degree of local specialization than many other markets.

More than one way to skin a cat

2018 will likely see a slowdown in music subscriber growth in many western markets. In the meantime, majority of the 9.99 price points will be addressed. Ad supported and discounting will be key to sustaining growth in these markets, but the scale of opportunity for digital music lies in emerging markets. 2017 was the year we really started to see Latin American markets begin to make their mark, while China established itself as a major contributor to subscribers, if not revenue. Services like Yonder are important for the music business, not just because they address new markets but also because they represent another approach. The 9.99 AYCE model will remain the core opportunity, but sticking too tightly to it will limit the scope of the wider market.

Yonder’s model is not without challenges – not least the concept of making premium music feel like it’s free to its users – but it represents one of what should hopefully become a wider selection of alternative paths to making streaming pay.