Why Spotify’s TAM is only part of the story 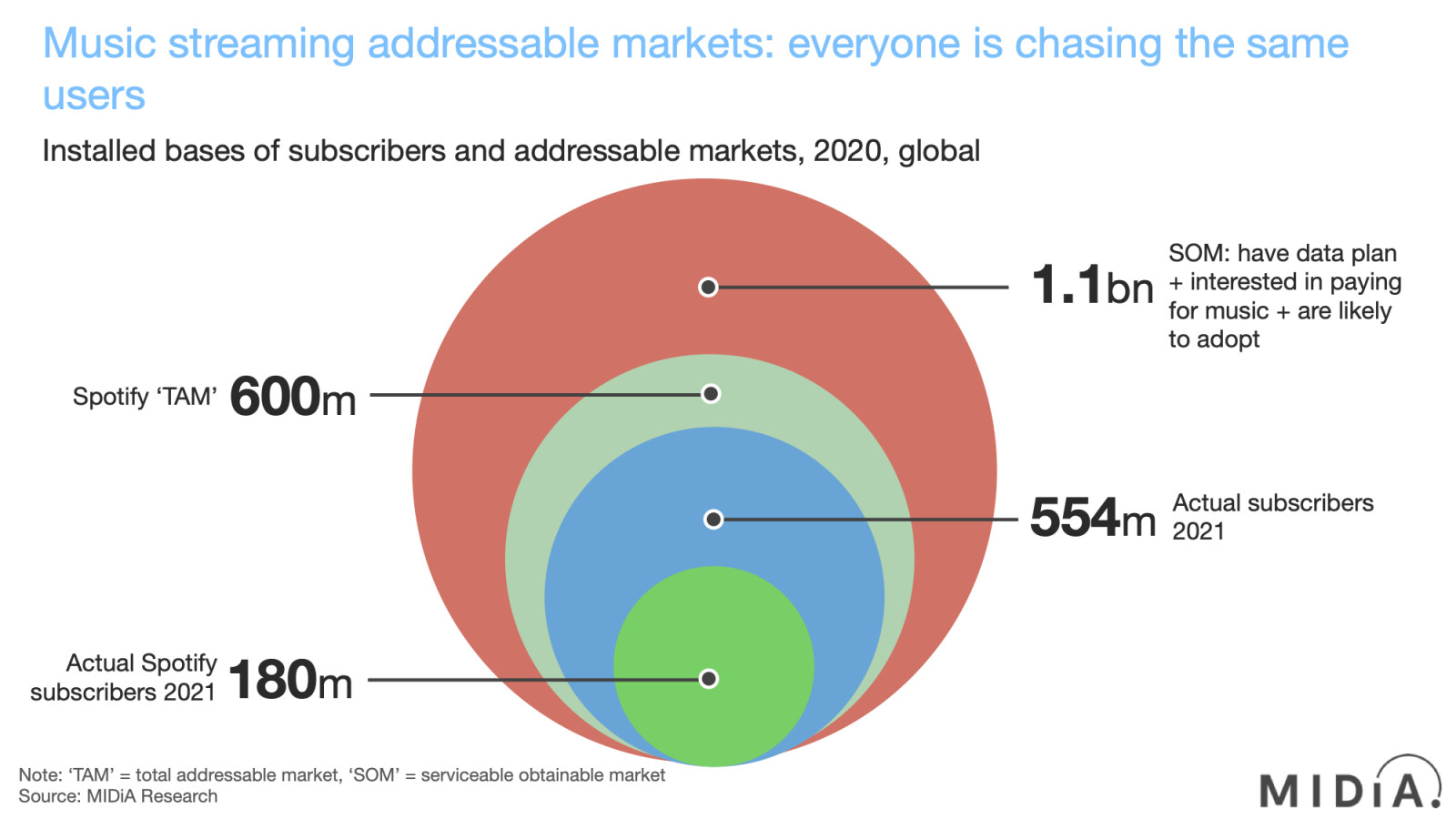 Spotify just held an investor day in which it ran through its vision for growth. Spotify has long touted the concept of its total addressable market (TAM), its path to a billion users and the role of emerging markets as the surest path to this figure. Spotify’s presentation focused on monthly active users (MAUs), but, for the purpose of this blog, subscribers will be the key focus for two reasons: 1) MAUs are an inflated reach measure, while weekly (WAU) and daily (DAU) active users measure a far more tangible quantity of actual engagement. The tech giants, like Meta, focus on WAU and DAUs in their filings. In the saturated attention economy, monthly use can be one step away from total inactivity. 2) Ad revenue was just 12% of Spotify’s 2021 revenue, and while it is getting better at ad monetisation (due in large part to podcasts), it has a much weaker track record of ad monetisation than it does subscriptions. Subscriptions are where Spotify makes its money and are also where the music business makes its money. 73% of 2021 global label streaming revenue was from subscriptions (and that is based on a number inflated by non-DSP streaming).

First off, a bluffer’s guide to TAMs. TAMs are actually just one part of a three-step way of measuring opportunity:

Why TAMs alone are not enough

MIDiA employs a TAM / SAM / SOM methodology in its forecasts, as follows:

The SOM stage is crucial for emerging markets. Broadly speaking, it is consumers in urban conglomerations who are most likely to be addressable by streaming subscriptions. A rice paddy worker in rural Bangladesh might have a phone, but they are likely to a) have very little disposable income, b) use their phone most as a utility, and c) have bigger worries than whether to pay for a music subscription. The TAM and SAM figures might be reassuringly larger figures, but, in truth, it is the wealthier, more tech-centred, urban elites in emerging markets who are most likely to convert.

Real terms affordability is crucial too. A subscription in India is around five times cheaper in dollar terms than in the US, but, on a PP basis (i.e., adjusted for local affordability), it is 12 times more expensive. Which further emphasises the role of urban elites in emerging markets for streaming subscriptions.

When we map MIDiA’s SOM alongside Spotify’s TAM, the market opportunity immediately looks bigger. And it is. But Spotify does not operate in isolation. It is one player in a competitive marketplace. In 2021, there were already 554 million paid subscribers globally, of which, 180 million were Spotify users. The global subscriber base represents 92% of Spotify’s TAM. The global subscriber figure is swelled by China’s nearly 100 million subscribers, a market in which Spotify does not operate due to its ‘poison pill’ equity swap relationship with Tencent. But even removing China from the equation, 76% of Spotify’s TAM was already addressed by itself and its competitors in 2021.

Does this mean Spotify’s growth ambitions are unrealistic? Not necessarily. There is a huge amount of growth left in the market, as MIDiA’s forthcoming music market forecasts will show (and from where the figures in the chart come). But the opportunity must be gauged in the context of where Spotify sits in the wider competitive marketplace, not in isolation.

It is no coincidence that Spotify is focusing here on free users rather than paid. Free users are the funnel for Spotify’s wider business (i.e., including podcasts and audiobooks, which it can best monetise via ads). But even the free streaming market is hyper competitive, with close to 1.5 billion free users already globally in 2021. Most importantly, though, the free user numbers are biggest in the most populous emerging markets, and it is local players that dominate. The future of music streaming in emerging market is going to (at the very least) be shaped as much by local emerging market players (e.g., Boomplay, JioSaavn, NetEase Cloud Music) as it is Western streaming services. In fact, there is an argument that Western streaming services looking at the emerging markets world as their target for colonising with streaming users is actually Western-tech imperialism.

NOTE: MIDiA’s annual music forecasts are close to complete and will contain historical and forecast data for streaming revenues and users, and much, much more, with revenues both in label terms and retail terms (i.e., inclusive of publishing and DSP shares). If you are not yet a MIDiA client and would like to learn more about MIDiA’s forthcoming forecast, email stephen@midiaresearch.com

The Morbius flop demonstrates the importance of measuring sentiment, not just engagement

by Hanna Kahlert
8 Jun 2022
The Marvel films franchise has been one of the most reliable box office attractions of the last decade. Thus, when the latest instalment, Morbius , was due to be released, expectations were high: the film...

Retention and engagement are both key to streaming resilience in 2022

by Tim Mulligan
7 Jun 2022
The great video subscriber gains made between the D2C big bang era of 2019 and 2021, and the engagement gains of the Covid-19 pandemic, are being eclipsed by the increasing pressures of the attention economy...

Podcasts are fuelling TV hits — will this help audio listenership?

by Annie Langston
1 Jun 2022
While podcasts continue to find a seat at the mainstream entertainment table, it is becoming the content behind the curtain of some of the biggest television shows. Some of the most popular shows of this...
No thanks