Why Amazon could become the ESPN of future E-sports coverage 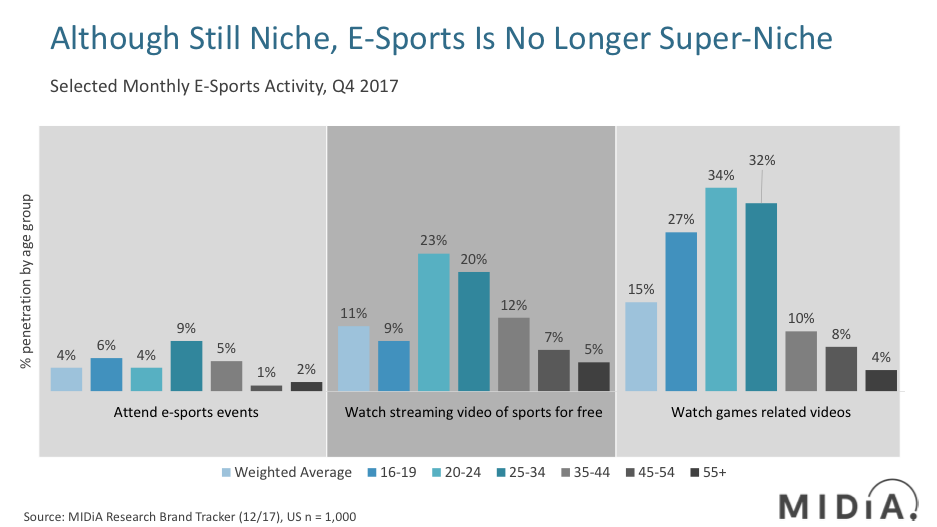 Last month’s NBA 2K partnership announcement between Take Two Interactive (the publisher for the NBA 2K video game) and Twitch to livestream all the new NBA 2K league on its platform was yet another milestone in the rise of e-sports as a content destination in its own right. The NBA 2K League was formed in 2017 to create a competitive league for teams of gamers competing against each other playing the NBA 2K game. 17 of the 30 NBA teams have their own NBA 2K team where they have drafted 102 e-sports athletes out of an available pool of 72,000 qualified gamers. The lucky few received handshakes from the NBA commissioner with all the pomp and circumstance of the mainstream NBA draft. The league itself is 50-50 partnership between the NBA and Take Two Interactive, and the natural destination for live streaming the competitive matches is on Amazon-owned live streaming gaming platform Twitch.

As the above chart demonstrates, e-sports and video-game viewing is still small but among the younger demographics, it is now a sizeable minority consumer behaviour with 34% of 20–24 year olds watching games related videos on a monthly basis. This compares to 23% of the same demographic who watch traditional sports for free on streaming services. Although actual attendance of e-sports events remains low at 4% for the same demographic, it rises to 9% for 25–34 year olds and reflects the traditional sports breakdown between those who can afford to attend live events and those who have an interest, yet lack the discretionary income to attend. Instead, they consume from the comfort of their homes.

The e-sports journey is just beginning

With the NBA 2K League just over a year old, the e-sports industry is right at the start of its journey towards becoming a premium sports offering. Nonetheless, the seriousness with which the NBA is taking its joint venture with Take Two Interactive underlines just how aware the sports incumbents are of the need to address the demographic cliff that is rapidly approaching traditional premium sports coverage—only 2% of 16–19 year olds in the US now regularly watch sports on TV. This contrasts with 46% of consumers aged 55-plus in the US who still watch sports regularly on TV.

Amazon as the owner of Twitch is therefore in the enviable position of potentially becoming the ESPN of next generation sports coverage due to its connection with Twitch’s highly engaged user base (more people watched live-streamed gaming content in August 2016 than watched NBCUniversal’s official live Rio Olympics coverage). As existing sports brands increasingly start to build relationships with their e-sports audiences, Amazon has an unrivalled ability to start deploying future-proof sports content that resonates with digital-first audiences, in a way that traditional pay-TV sports coverage is currently failing to do.

As I discussed yesterday in the Future Proofing Sports Content panel at the Pay-TV Show,  the future of sports interaction will increasingly be built around leveraging brand equity in existing sports franchises in highly segmented ways, offering the consumer multiple touch points with the content at multiple different price points.

The future-proofing of sports content is therefore taking its first tentative steps in re-engaging with digital natives.