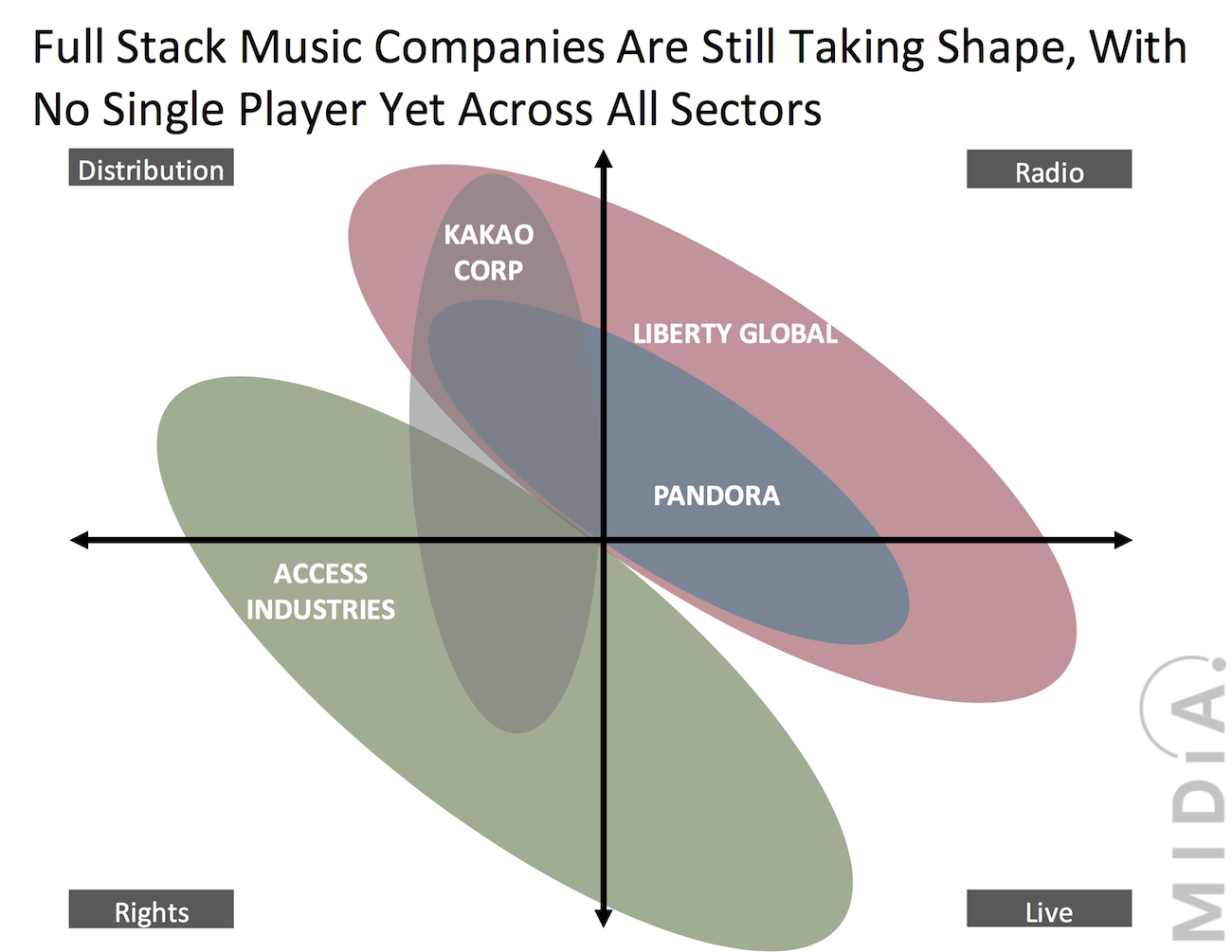 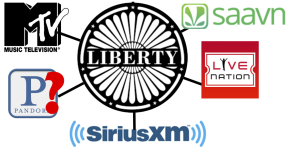 Access Industries’ full stack music company has, ahem, company: Liberty Media. With a combined market market cap of $37 billion, John Malone’s Liberty group of companies is by anyone’s standards a serious player. In the world of media and telecoms it is one of the biggest. Liberty grabbed the headlines this week with its $2.7 billion acquisition of a 15% stake in Formula One, with an option to acquire the entire company, possibly by year’s end. It is a typically bold move for a company that makes a habit of acquiring companies and consolidating markets. Over the past 11 years Liberty Media and Liberty Global have spent around $50 billion on acquiring companies such as UK TV operator Virgin Media, Dutch cable company Ziggo and (indirectly via a holding company) major league baseball team Atlanta Braves. So far so good, but where’s the music angle I hear you ask. Well, just a few weeks ago Liberty made a bid for a certain Pandora Media to add to its already extensive collection of music assets.

Liberty made an informal offer of $15 a share for Pandora, which was at the time a $1 premium on its current share price, however Pandora is reportedly holding out for $20. Liberty’s bid wasn’t some random shot in the dark. It was an attempt to add to its already extensive music holdings which include:

Add into the mix positions in around 10 telcos, minority positions in media companies such as Viacom and Time Inc and a potential merger with global mobile carrier group Vodafone and you have the makings of an end-to-end media-tech conglomerate. Or in today’s parlance, a full stack music company.

As we previously noted, Access Industries has been amassing its own full stack music empire, adding growing investments in Deezer and Songkick to its $3.3 billion 2011 acquisition of Warner Music Group, alongside a collection of telco investments. In fact, news just emerged this week that Access has now become the majority share holder in Deezer, tightening the control of its vertical stack. Liberty’s would-be acquisition Pandora has itself been building up its very own full stack play with the acquisitions of Ticket Fly, Rdio and Next Big Sound. No full stack company has yet made investments across all four music sectors (distribution, radio, live, rights). This though, is as much a reflection of the relatively early stage of the strategy than it is long term intent. In fact, the prospect of a Liberty bid for Universal Music is tantalizing to say the least.

We’ve Been Here Before

The full stack strategy is a rerun of the phase of media and tech consolidation in the 1990’s and 2000’s that gave birth to entities such as AOL Time Warner and the emergence of new over-extended corporate empires for the likes of Vivendi, Sony and Bertelsmann. Notably, all four of those included a major record label group (UMG, Sony Music, BMG, Warner Music respectively). By the mid 2000’s it was becoming clear that hoped for synergies and cost savings just didn’t materialise. Consequently, most of these companies spent the next decade divesting themselves of their recently acquired assets.

Now it is happening again. The theory is as sound now as it was then: control multiple parts of the value chain to extract maximum value, maximum cost effectiveness and own as much as possible of the audience’s time and attention. Liberty’s broader media full stack play is particularly bold, encompassing TV operators, TV networks, telco infrastructure and sports franchises. Sports is the crucial ingredient. For all the threat of cord cutting from video disruptors such as Netflix and Amazon, pay-TV is, for now, largely holding its own. Sports is the secret ingredient, the subscriber lock-in. But global sports rights are becoming hyper inflated. The latest TV rights package for the English Premier League was worth $8.7 billion. Buying the sports franchises themselves delivers cost savings and, crucially, control.

While it may prove difficult for today’s wave of full stack companies to fare any better than their dot com era predecessors, the more connected nature of both businesses and audiences today contributes to a more favourable market environment. Indeed, Liberty and Access are in many ways replicating Apple’s, Google’s and Amazon’s integrated ecosystem plays. Instead of using hardware or software to define the boundaries they are using business models and companies.

Full stack isn’t going away any time soon, which means that the remaining major record labels may yet find themselves very much in demand.

Paul Gelsomine
12 Sep 2016
That's right harry if it all goes corporate how does the working stiff fair? Poorely! Riding on the backs of the working class is not very commendable in my book.
Harry Urschel
9 Sep 2016
John Malone is the former owner of TCI, Inc. His company was known for low cost investment, low pay and poor customer service. This is not someone that should be in the music business. He will become part of the problem, not part of artists and songwriters being treated fairly.
No thanks