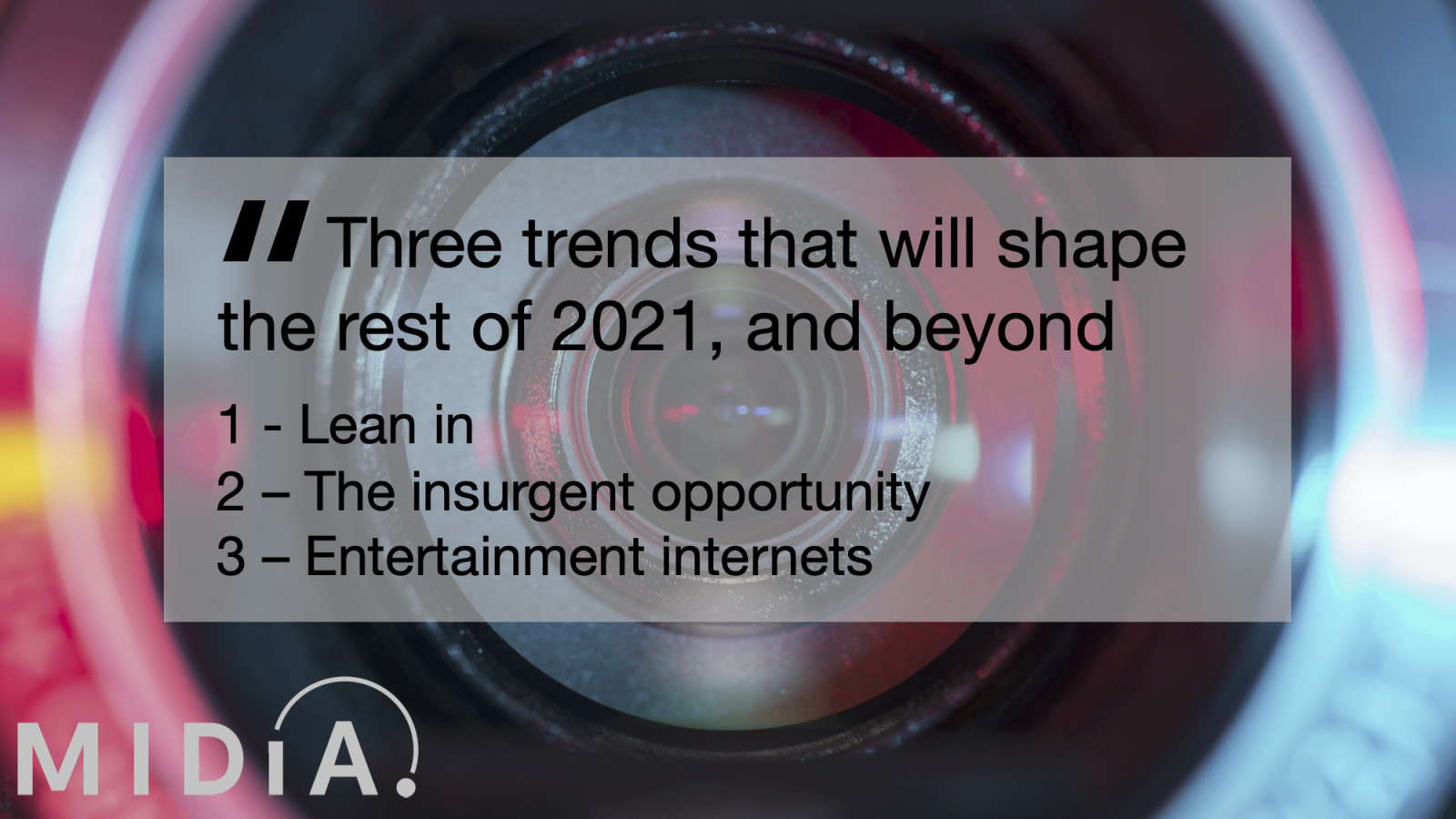 Late last year, MIDiA published its latest predictions report (clients can read the entire report here). The central theme was the Immersive Web, which we summarised as follows:

“The immersive web is characterised by environments in which we do not simply conduct extensions of in-real-life activity (e-commerce, video calls) but ones that create behaviours and relationships that only, and can only, exist within these environments. Apps and platforms like Roblox, TikTok and Discord are early iterations of the immersive web, but merely hint at what will come.”

Our analyst team has been developing this theme and thinking about how its impact will shape digital entertainment in 2021 and beyond. These are our three identified disruptive themes that will flow from the Immersive Web:

1.    Lean in: One of the dominant discussions concerning on-demand entertainment is the balance between lean forward and lean back experiences, i.e. the degree to which audiences actively choose what they are engaging with versus what they sit back and consume. But that framework does not capture the emerging shift towards audience participation, of consumers actively engaging with and modifying the content. We term this behavioural paradigm as lean in. Whether that be a teen creating a TikTok video, a consumer creating a meme or a gamer making music on Splash in Roblox, digital audiences increasingly expect to be a part of the content itself. We think audio will be the next frontier for lean in. MIDiA’s Cultural Insights analyst Hanna Kahlert will be developing this theme.

2.    The insurgent opportunity: The competitive marketplace of digital entertainment companies is becoming static. Though there is still lots of growth and in many cases – e.g. podcasts, video – accelerating investment, innovations in user experience have slowed. The likes of Apple, Warner Media and ViacomCBS are shaking up the video subscriptions marketplace, yet they are differentiating around content, not features. Incumbent Netflix has done relatively little to innovate its user experience. The same story plays out in music (with the exception of layering podcasts into the mix, which is of course not innovating the music experience but instead the wider audio experience). Across all of digital entertainment, big incumbent players (Facebook, Google, Apple, Amazon, Netflix, Spotify etc.) are becoming so mainstream they are having to slow their innovation so as not to alienate their newer, mainstream audiences. This is exactly what happened to Apple once the iPod and iPhone thrust it into the mainstream. This creates a huge opportunity for disruptive insurgents who do not have to cater for older, mainstream audiences and can focus on disruptive innovation rather than sustaining innovation. Asian-origin apps like TikTok and Weverse are beginning to chip away at incumbent stasis. This trend will aggressively accelerate, driving the next major chapter in digital entertainment.

3.    Entertainment internets: A number of the biggest platforms on the planet have become so dominant and so exhaustive that they are effectively creating mini-internets. YouTube is the internet of video, Amazon the internet of commerce, Facebook the internet of social. Each has succeeded in this all-encompassing impact by delivering so much to diverse audience segments and use cases. They have then used this audience to pull the majority of the partner and creator value chain into their orbit because those parties simply cannot afford not to be there. The internet itself has continued to prove largely immune from wholesale regulation, but these entertainment internets may prove easier targets for regulators as they are owned by single corporate parents and thus risk falling foul of anti-competitive behaviour oversight. Other than regulation, in the near to mid-term, these entertainment internets will face relatively little disruptive threat other than their own hubris. The rise of insurgents will hit the incumbent pure plays harder and first, though over time even the entertainment internetswill also find themselves under fire.

by Mark Mulligan
18 Dec 2020
As we approach the end of 2020 it is time to look forward to what 2021 may bring. MIDiA has published the fifth edition of our Annual Predictions report which clients can read here . There are 27 predictions...

by Hanna Kahlert
26 Jan 2021
Being a music artist is no easy feat these days. Labels are struggling to cut through the clutter of content proliferation, pushing artists to shorten songs, forgo the album, and prioritise playlist placements...

by Keith Jopling
20 Jan 2021
Marketing Long Read Part 1: Catalogue & Song Management It will not have escaped your attention that music catalogues are changing hands for serious sums of money. The race to acquire the songwriters’...
No thanks