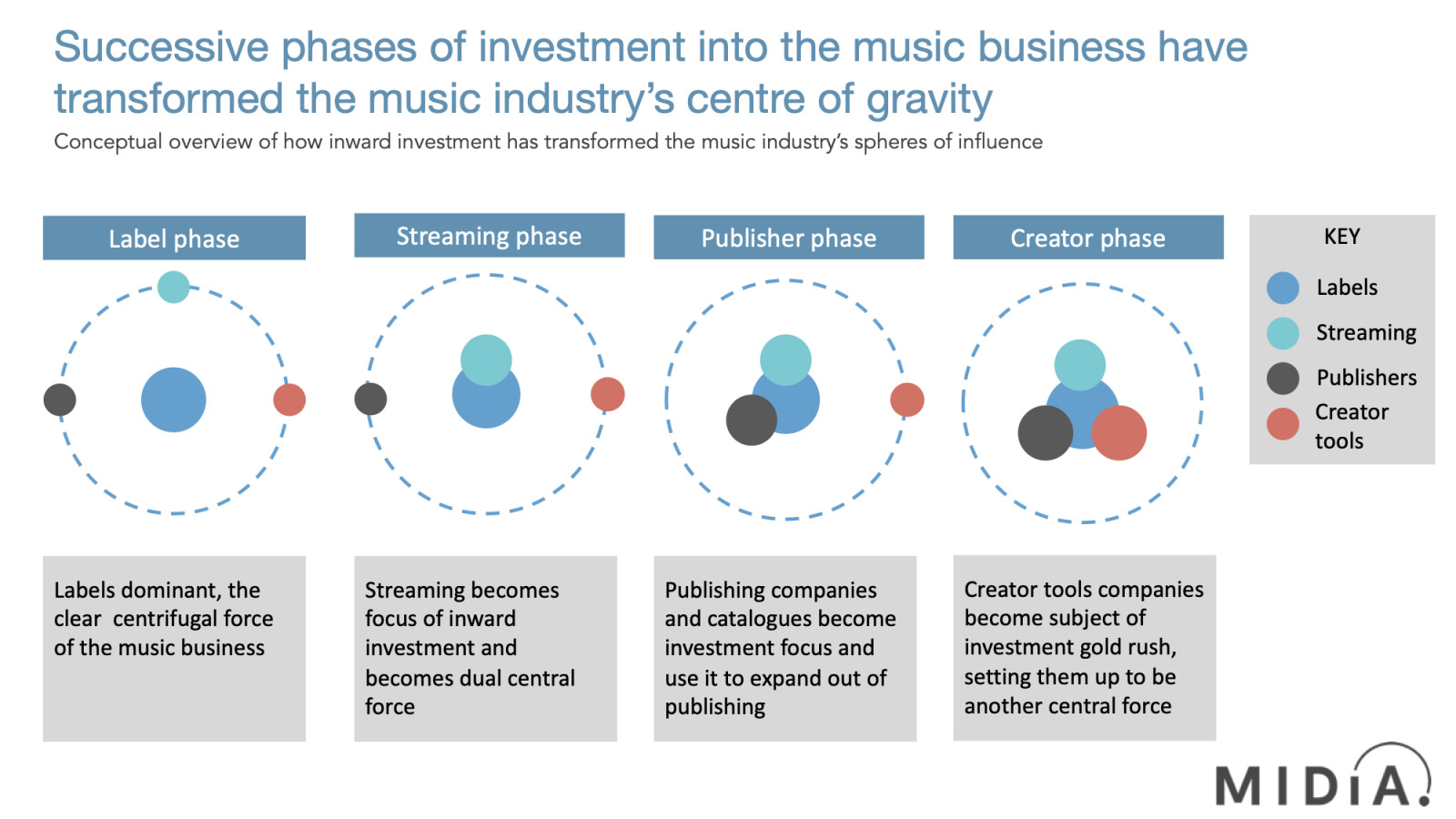 Regular readers will know that MIDiA has been analysing the creator tool space for some time now and building the case for why the changes that are taking place will be transformational not just for the creator tools space itself but for the music business as a whole. In fact, we believe that the coming creator tools revolution could be at least as impactful on the wider music business as streaming was. Firstly, it establishes a new top-of-funnel that sits above distribution companies, meaning that creator tools companies are now able to fish upstream of labels for the best new talent. Secondly, audio will become the next tool with which consumers identify themselves, following the lead of images (Instagram) and video (TikTok). But there is another factor too: the fast-growing volume of institutional investment is changing where the centrifugal forces of the music industry reside.

Outside of the currently crippled live business, the record labels used to be the undisputed central force of the music business. Then streaming services grew in scale and attracted the first wave of inward investment into the industry. Alongside labels, streaming services became the joint central force of the music business, around which all else orbited. Big investors started to make bets on either side of a binary equation: rights or distribution.

Then music publishers and publishing catalogues started to attract investment. At the time, the only real place big institutional investors could place their bets on the rights side of the equation was Vivendi – and even then, it was an indirect bet as UMG was just one part of Vivendi. SME is just too small a part of Sony Corporation for the parent company to be a viable music industry bet. Since then, UMG divested 20% of its equity and is on path towards an IPO; WMG went public and Believe is on track to an IPO also.

Investors may be given pause for thought by the way in which leading music industry trade associations such as ARIA in Australia and Promusicae in Spain have restated their 2019 figures, having the effect of making what would otherwise be declines in 2020 instead look like growth. Take a look at Australia (2019 total revenues AUD 555 million here versus 2019 total revenues AUD 505 million here) and Spain (2019 subscriptions €159 million here versus 2019 subscriptions €138 million here).

Publishing catalogues by contrast look more predictable, with performance still largely shaped by non-recorded music market trends, including radio and public performance – though COVID-19 threw a lot of that stability down the toilet. Music publishers used the inward investment to diversify their businesses. Kobalt pushed into artist distribution (recently sold to Sony), neighbouring rights and a PRO; Downtown pushed hard into the independent creator sector (CD Baby, Songtrust); while Reservoir is going public with a Spac merger; and then of course there is Hipgnosis.

What this means is that the music industry now has an additional gravitational force at its core. Just as music publishers and streaming services used their newfound investment to push into other parts of the music and audio businesses, expect creator tools companies to do the same. With hundreds of millions of dollars pouring into creator tools (and lots more set to follow), investors are making big bets on audio in a broader sense, with bold ambitions that will not be sated by staying in the creator tools lane as it is currently defined. Avid’s recent move into distribution follows on from LANDR’s similar move, and of course Bandlab has 30 million ‘users’. Adding label-like services (e.g. marketing, debt financing) and streaming functionality are logical next steps for creator tools companies.

Streaming may be the change agent that has enabled all of these shifts – but streaming is the start of the story, not the end point. The process of music business diversification is only just beginning and the next chapter may be the most exciting yet.

by Dara Jegede
25 Mar 2021
BE THE CHANGE: WOMEN MAKING MUSIC 2021 TuneCore and Believe Partner with MIDiA for First of its Kind Global Study LONDON, BROOKLYN AND PARIS —Thursday, March 25 2021: MIDIA Research and TuneCore/Believe...

Kevin RICH
26 Apr 2021
This hopes for a "build it and they will come" outcome. It's unlikely. Demand, not supply determines economic and artistic viability. A bunch of folks "typing" forever, will not duplicate S-speare. What did create S-speare was paying audiences - for over 400 years! VC can fund all they want but without brilliant compelling art = less than zero. There is no app for genius and endless hard lonely work. Sorry
Andrew Potterton
22 Apr 2021
Interesting model and observations here Mark.
Kevin Rich
19 Apr 2021
The core problems remains: how NEW story/song creators get paid enough to continue creating? Techbro-engineers now take all the money and have a "Kill the creator" biz model and want AI to create all art. Music is dead and has become like archeology - digging up artifacts from the past. Of course, this is true of all the arts.
No thanks