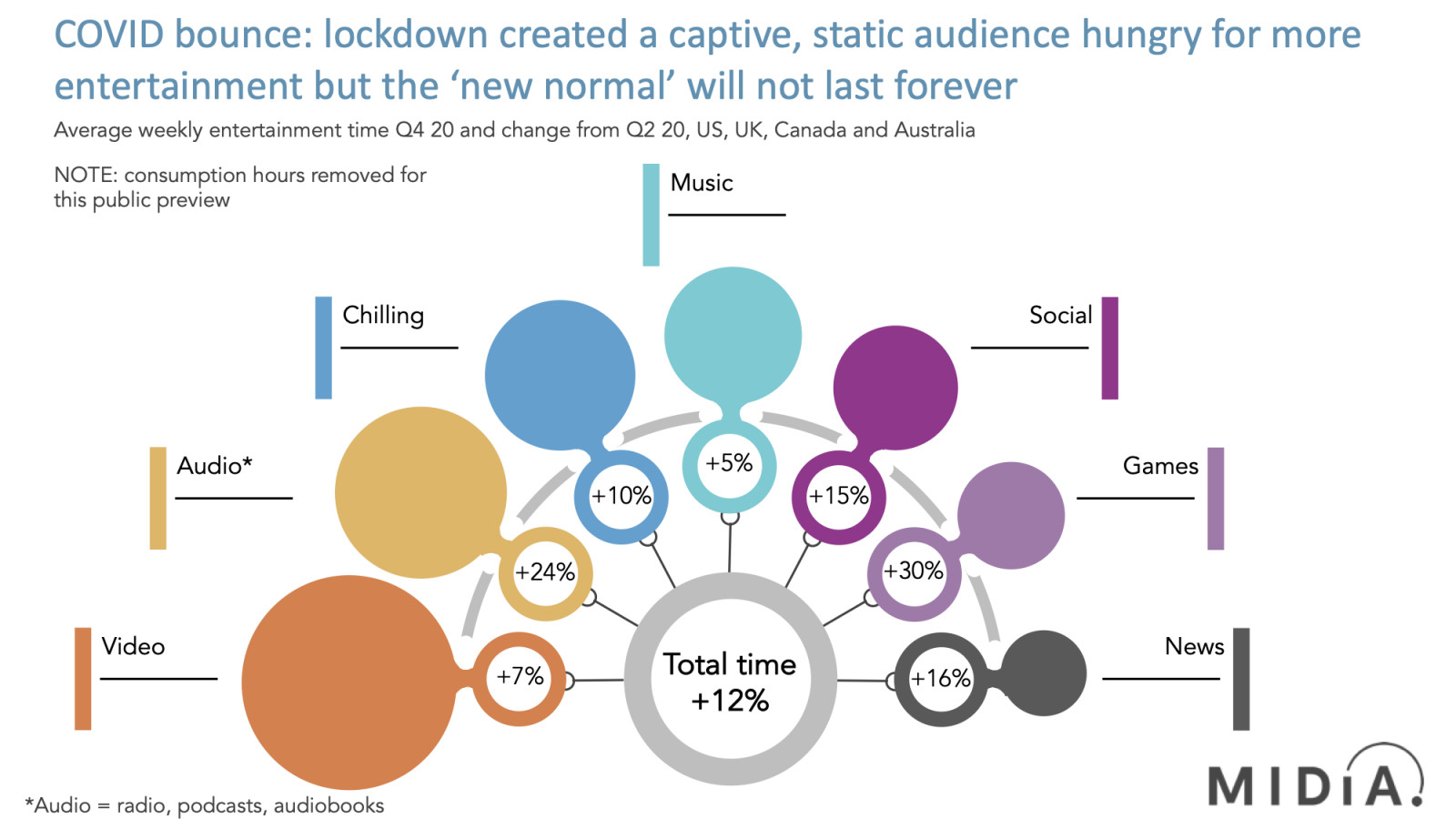 2020 was by any measure a unique year in modern times. While the societal impact of the pandemic was, and continues to be, horrific, for the entertainment industries it was a year of plenty. At the start of the pandemic, MIDiA Research estimated that there would be an extra 15% of consumption time for the average working consumer. Well, now that the end of year data is in, we can confirm that this ‘COVID bounce’ did in fact happen, with overall consumption time up by 12%. When you consider that the working population is only a subset of the overall population, that 12% means that we were pretty much on the money with our prediction. But while this uplift was seen right across entertainment, some formats did better than others and, crucially, some of that extra time will diminish whenever it is that the population starts returning to work and going out again. Which means that for the first time ever in the Attention Economy, there will be an Attention Recession, with very obvious potential ramifications for all entertainment companies.

The full results of MIDiA’s highly detailed COVID media consumption study is now available to MIDiA clients in the report ‘Media consumption: Lockdown’s attention boom’ and the accompanying dataset. Here are a few of the high-level findings.

·      Everything was up: 2020 was a case of a high tide rises all boats, with all forms of entertainment increasing average consumption time. Video consolidated its position as the leading format in terms of hours spent, but the largest percentage gains were in games (30%) and non-music audio (24%). Consumers even increased their time doing nothing / chilling, illustrating that despite the unsettling chaos of the pandemic, consumers found more time to relax and also to contemplate. Interestingly, doing nothing increased by a greater rate than listening to music.

·      Audiobooks were audio’s big winner: While podcast listening was up by an impressive 35%, audiobooks were lockdown’s biggest winner, increasing average time by nearly 50%. The radio and music businesses’ obsession with podcasts is understandable given how much focus the likes of Spotify, Amazon and Apple have placed on them, but the audiobooks category has emerged as the dark horse of the piece. When all audio time is considered together (radio, music, streaming, podcasts, audiobooks), audiobooks now account for a similar share of total time as podcasts do. Though music streaming was up too during lockdown, it grew more slowly than podcasts and audiobooks so was flat in terms of total share. Radio lost share. The shift is reflected in Spotify’s numbers: its average content hours per monthly active user (MAU) fell by 1% in 2020. Given that this figure includes podcasts, the inferences are: a) Spotify lost share of audio time, and b) music hours fell. It wasn’t just Spotify that did not keep pace with the audio boom. Even apps like the BBC’s Sounds saw a fall in the ratio of weekly to daily users.

·      Casual gamers boosted games: Games’ growth was driven both by core gamers using the former commute time to get in some extra time on their consoles and gaming PCS. But the biggest growth was driven by mobile casual games. In previous years, mainstream consumers had driven a games surge, adopting titles like Candy Crush, but then shifted much of this time to the likes of Netflix and Spotify as the Attention Economy saturated. With more time on their hands in lockdown, mainstream consumers flocked to casual games once again. This will be a likely casualty of the coming Attention Recession.

·      Music is just one lane in audio: COVID-19 catalysed many pre-existing trends; the audio shift was one of those. Just as Netflix took TV out of the TV, podcasts took radio out of radio and contributed to a wider trend of consumers taking an increasingly format-agnostic view of audio. Breaking long-held habits in lockdown, audiences were able to try out new things and, given that we are nearly a year into the lockdown era, establish new behaviours that will remain to some degree post-pandemic (if that is ever a phrase that will really ring true). Traditional habits like the commute and exercise will now see audiobooks and podcasts competing for music time like never before. For music companies, this means that they need to understand they are now in the audio business and they are predominately just competing in one lane. This does not mean that they inherently need to become ’audio businesses’, but it does mean that they need to build strategies that account for this shift. Meanwhile, Amazon once again emerges as the dark horse with music, podcasts and – via Audible – audiobooks. Amazon looks set to be a big beneficiary of the lockdown legacy.

If you are not yet a MIDiA client and would like to learn how to get access to the ‘Media consumption: Lockdown’s attention boom’ report and data then please email stephen@midiaresearch.com.

by Hanna Kahlert
16 Feb 2021
In the latest episode of a long-running feud between Taylor Swift and Big Machine Records, the western princess turned pop icon is releasing the first of her original re-recorded albums under her own ownership....

by Hanna Kahlert
13 Jan 2021
The much-anticipated Cyberpunk 2077 was released last month on December 10th, as both the most expensive game ever made and with one of the most high-profile acting casts. Following the studio’s highly-successful...
No thanks