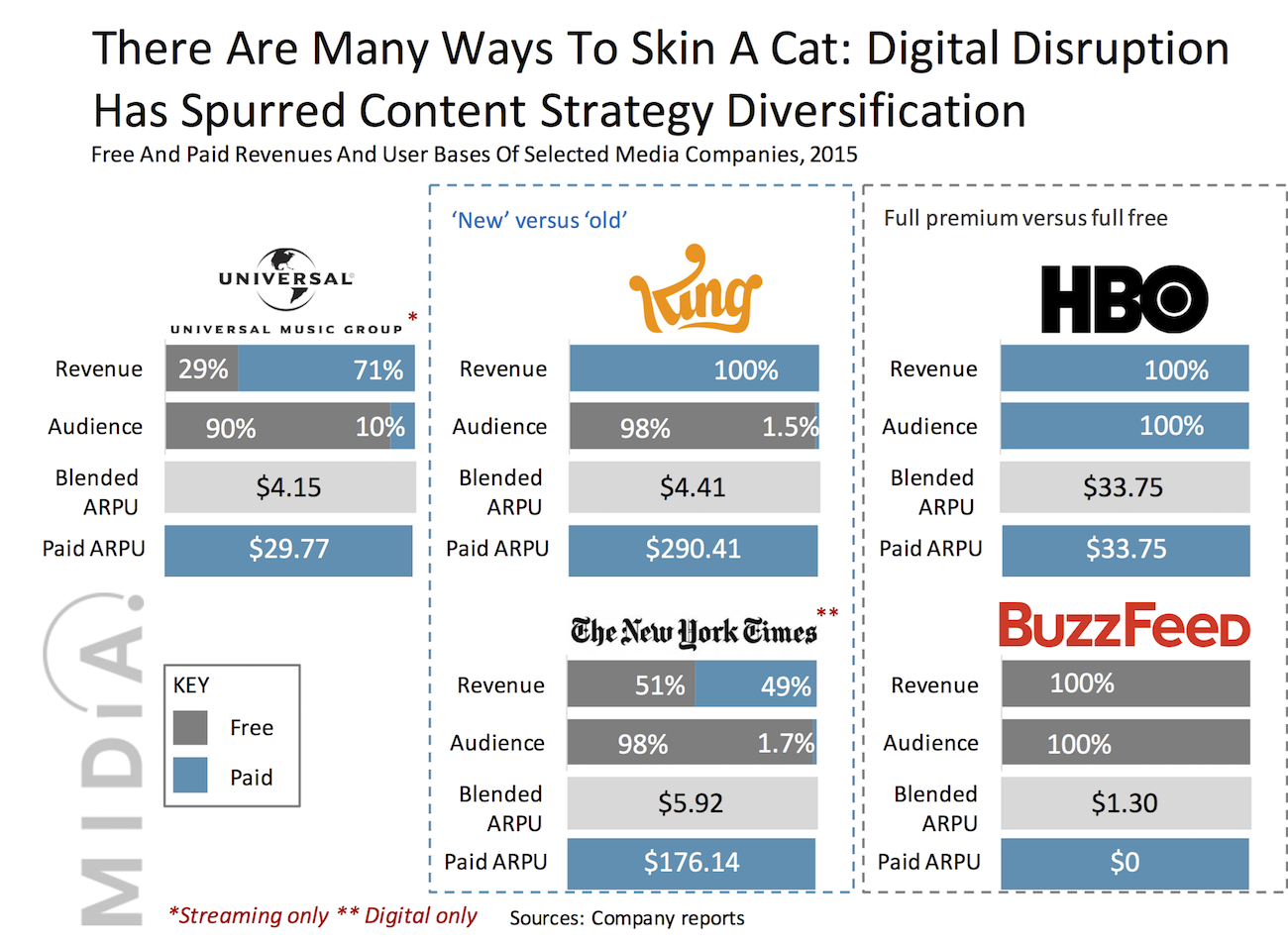 The internet’s ‘gift’ to media companies was free. And it’s the gift that just keeps giving. Record labels, newspapers, online publishers, TV companies, games publishers continue to grapple with how to convince audiences to pay when their product or direct alternatives are ubiquitously available for an investment of nothing more than a swipe of a finger. The patently obvious downside of this existential struggle is a steady, and sometimes dramatic, decline in media company revenues. But an equally tangible benefit is that it has forced media companies to up their game. Audiences can no longer be taken for granted. Because content scarcity has gone out of the window, paying for content has become a life-style choice for most media, though there are notable exceptions such as live sports. Now audiences need a reason to spend, there needs to be a clear value exchange. A multitude of monetization models is emerging out of these troubled waters, each distinct in its approach and also in its degree of success.

The unifying trend in content monetization today is that there is no unifying trend. To illustrate this the MIDiA team ran an analysis of an intentionally diverse selection of media companies and compared their free-to-paid conversion ratios, paid ARPU, free ARPU and blended ARPU (i.e. the average spend of their users across free and paid combined). The results are startling. 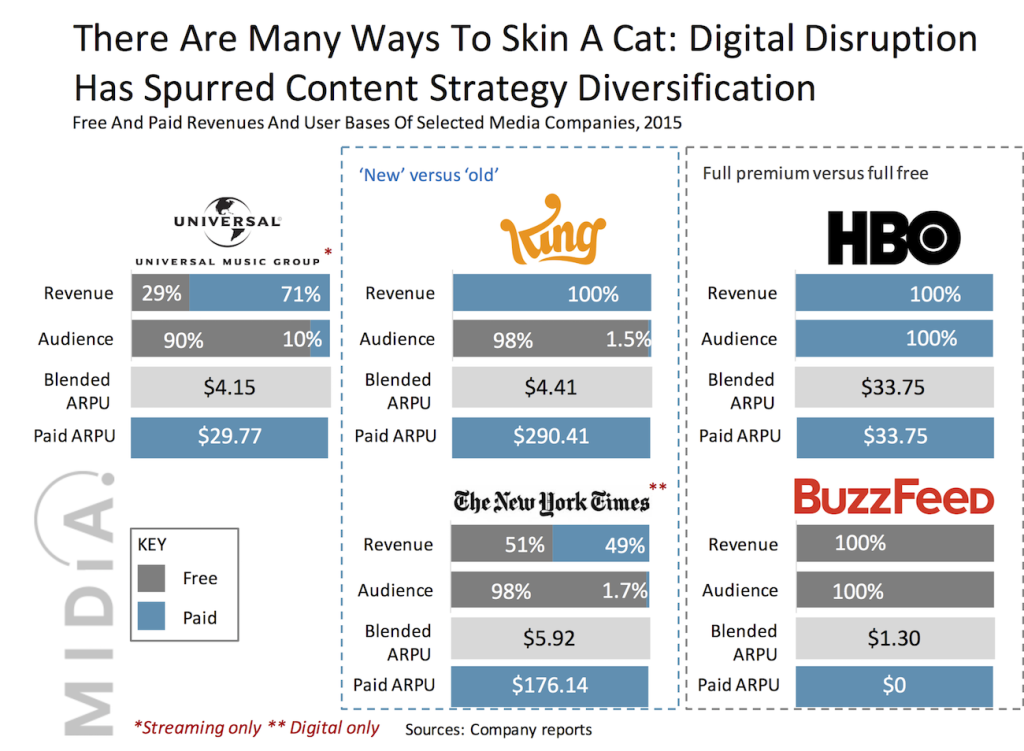 Universal Music rightly got a lot of attention recently for becoming the first billion Dollar streaming music company. Universal has managed to make streaming revenue scale. However streaming remains a revenue stream that is plagued by free. Only 10% of the total streaming audience (i.e. including YouTube and Soundcloud) is paid, and though this small group generates 71% of Universal’s streaming revenue, the blended ARPU is just $4.15. That’s $4.15 for the entire year of 2015, not per month.

Paid ARPU Needs To Be High To Make Freemium Work

Free though does not have to be the kiss of death. Take a look at mobile gaming company King. 98.5% of King’s audience is free yet it has an annual ARPU of $4.41. So even though its paid user share is 7 times smaller than Universal’s it still generates a higher ARPU. Why? Because King’s paid ARPU is $290.41, compared to Universal’s paid ARPU of $29.77. King does not even try to monetize its free audience, having turned off its advertising business in 2013. The lesson from this is that if you are going to use free as an acquisition funnel for a niche premium offering then you better be sure that your premium users spend a lot. Unfortunately, Universal’s most valuable customers have their spending capped at $9.99 a month.

Free Can Pay the Bills

But free can be made to pay too. The New York Times, a certified old media business, faces similar challenges to Universal but has had a very different experience. In addition to quietly notching up 1 million paid subscribers it has built a highly effective digital ad business. The result is a higher blended ARPU of $5.92 even though 98% of its digital audience is free. Premium ARPU is reassuringly high ($176.14) but free is also reasonably high: $3.00, more than double Universal’s free ARPU of $1.33. While Universal and King see free primarily as an acquisition funnel, the New York Times see it as a business model of equal importance to paid. Thus its digital revenues are almost evenly split between free and paid.

At the other end of the spectrum is HBO, a 100% premium business, thus with the highest blended ARPU of $33.75. But the flip side is a smaller total audience and also a much lower premium ARPU (i.e. $33.75) than either King or the New York Times. And finally we have BuzzFeed, probably the single most innovative media company of the moment. A company borne out of the digital era and with an exclusive focus on free (unless you count their dalliance with selling some videos on iTunes as a premium strategy). The resulting ARPU is just $1.30 but their 192 million strong audience is three times bigger than the New York Times. Also, for a company that is not even trying to sell anything to its audience its blended ARPU is worryingly close to that of the ARPUs of those freemium businesses Universal and King, companies that are expending all their efforts on trying to drive premium sales.

In short, one size does not fit all, but free is now shaping the businesses of virtually every media company’s digital content strategy, whether they like it or not.

leo sampieri
29 Feb 2016
Hi! I've found this article very interesting, and the concepts around blended ARPU, and paid ARPU, are excellent. Could you please tell me more about how you got to those numbers, in all the companies that you analized?. Thanks in advance !
No thanks