Demand Creation: What’s the Next Big Growth Curve for Music? 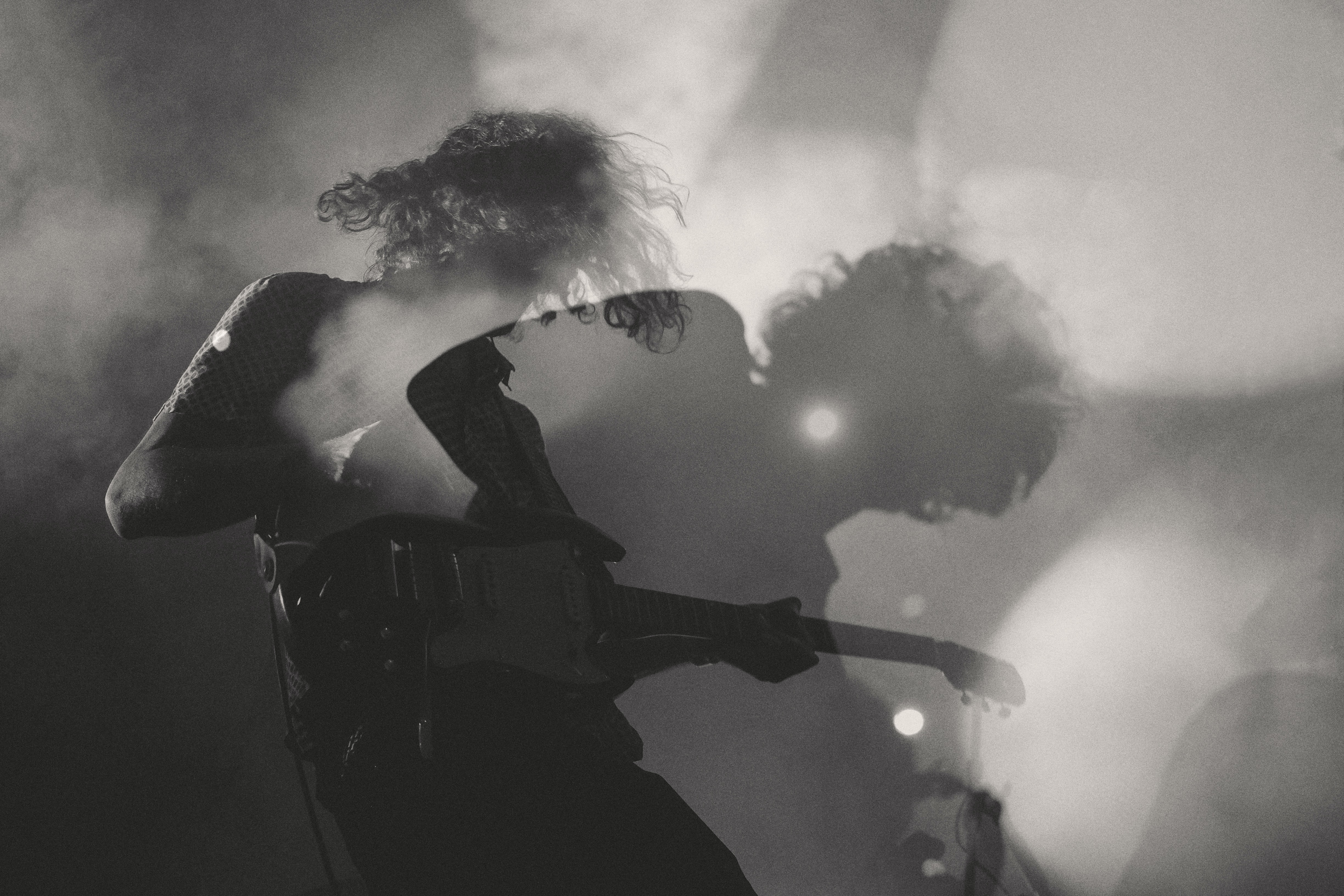 At Spotify’s last quarterly reporting session, CEO Daniel Ek talked about the company’s creator strategy, as part of the wider development of becoming a “2-sided marketplace”:

“The strategy has been about going from a one-size fits all model to a model that better fits the various types of content and creators on our platform. Through a combination of tools, services, and programs we will be able to serve creators better and build a better business for Spotify by leveraging our demand creation capabilities”.

This last phrase “demand creation” is an intriguing one. It has been referred to by both Ek and outgoing CFO Barry McCarthy. Demand creation (as opposed to demand generation) is the idea that an industry can grow through creating new use cases (through product features say, or a new platform) that didn’t previously exist. Or more likely, the demand did exist, but was latent in the marketplace. Spotify is often keen to stress that its hyper-growth success is connected to more than just product, platform – but a multi-factorial alignment so powerful, that literally new demand for music has been created that wasn’t there before. Certainly, in terms of time, this is undoubtedly true. Once we use the streaming platforms, we are firing up music multiple times a day, and listening for several hours a day.

Then again, there is the question now about music’s future growth possibilities, as well as its value – and the value filtering down to music creators. Warner Music Group’s CEO Stephen Cooper made some interesting comments at The Paley Centre For Media in New York last month. Amongst these:

“The streaming offerings in music have not been as consumer-friendly as they could have been… there isn’t a range of options and choices for consumers. “Right now, there’s a 50 million-track universe and it’s either free or $10 [per month], plus or minus. My view is that if [streaming services were] organized to allow people to choose by genre, or by number of tracks per day, hi-res sound, global [or] local, whatever it is, the music industry and the tech companies would have been ahead [of where they are now] by way of revenue optimization.” (quote as in Rolling Stone November 18 2019).

We don’t know if Cooper’s theory is right or wrong (certainly, it would have been harder to think of a more runaway success over the past 10 years than Spotify), but his question is at the heart of how the industry can manage its supply in order to generate its demand. When Cooper was talking about ‘a range of options and choices for consumers’, this is a statement on demand creation, just as much as the explicit references using the phrase by Spotify execs.

During that same event, Cooper was joined by Facebook’s Head of Music Business Partnerships & Development, Tamara Hrivnak, who predicted that Augmented Reality may become a new format for music. This is a different form of demand creation – suggesting a new use case for music, and a potential new content format. We discuss this and other potential formats later in this report.

A short history of demand creation in music

Over the past 40 years, the music industry has seen many highs and lows, mirroring the careers of many of the legacy artists the industry plays host to. The most spectacular successes in the music business, from the Sony Walkman to MTV, to iTunes and Spotify - have all generated demand for music in entirely new ways. These innovations succeeded because they tapped into latent demand, often opening up new consumption windows for music content or formats that already existed, but were not aggregated or focused towards a particular audience.

The biggest driver of new demand creation in the music business since the compact disc has been streaming, but as we head into the next decade the music industry is already witnessing a slowdown in streaming growth. With the industry still riding the wave of growth and excited about what’s next – be it new tech applications or next generation services – we might take more time looking back at the industry’s previous success stories. Can they shed light on the formula for success in unlocking latent demand? Do new opportunities for demand creation in music even exist as we head into the post-peak attention era?

MIDiA’s specialists from across music, video, games and sports came together as a team, to workshop the key factors that determined success for a set of key music innovations that were massively successful in driving new demand for music, both pre 2000: The Sony Walkman, MTV, the compact disc, Napster – and post 2000: iTunes, Beats headphones, Spotify and YouTube.

For each, MIDiA analysts discussed and agreed broadly on a ranking of the ‘top 3’ success factors in each case. In addition, we discussed the other key dependencies that these innovations relied upon or leveraged in order to create a ‘flywheel’ growth effect – an accelerated rate of growth aided by the growth of other, complementary innovations at the same time. The set of factors considered are as follows: 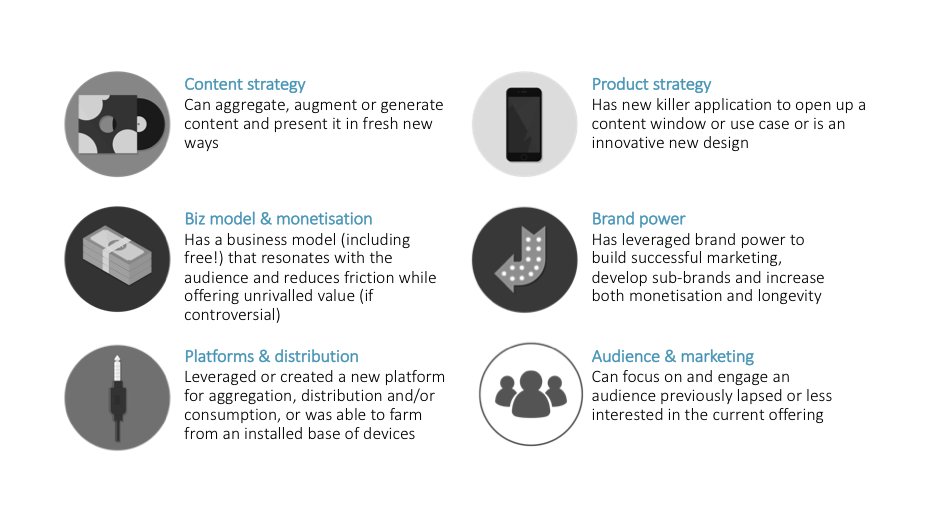 The MIDiA team assessed eight case studies of successful music-based innovations, including music formats, platforms and in the case of Beats, hardware. For each innovation we considered the demand trajectory using available data and researched the business environment in each case, the product or service attributes and the decisions made by each of the companies launched. We then allocated the most influential factors that drove demand in each case. The results are shown below for music's earlier (pre 2000) success stories. 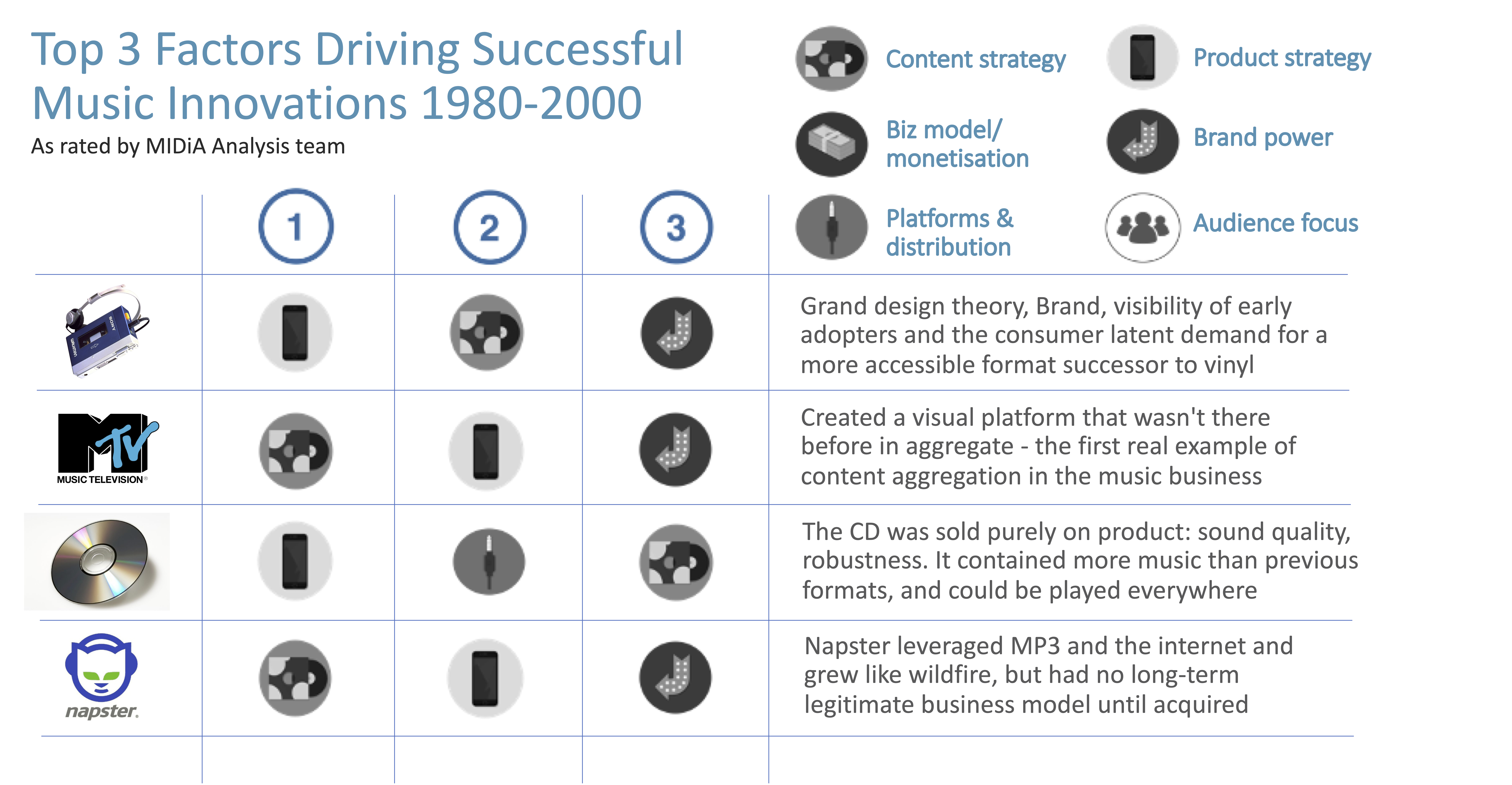 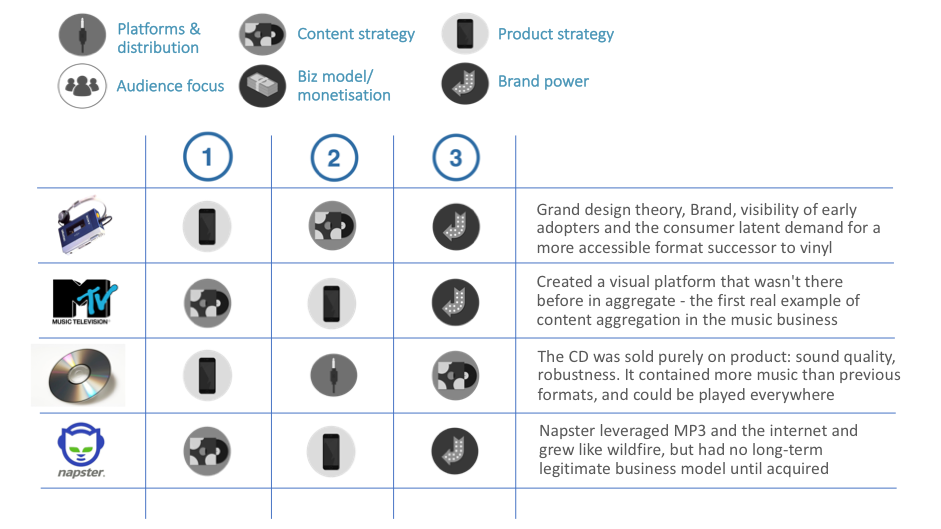 How much more time is available for demand creation in music?

New music innovations face a challenge that did not exist even as recently as the launch of Spotify - a saturated content economy. Digital content is analogous to the labour market, and content supply is now beginning to exceed attention capacity. This is already translating into increased customer acquisition and retention costs for service providers such as Spotify (as this report is published, Spotify was offering its premium subscription tier in India for less that $1 per month).

A formula for success – applied to new music innovations

To drive further growth, the music sector will need innovations that improve discovery, augment the content or the experience, and add value to the consumption already happening. The factors likely to drive success are very different to those that have been previously critical. For new innovations, platform is key. Consumers are less likely to sign-up to yet more platforms, subscriptions or apps, and so innovations that build on existing platforms are more likely to succeed simply by way of reaching an audience. And speaking of audiences, again, the mass audiences are well catered for via Spotify, YouTube and the Apple & Amazon ecosystems. On the other hand, those niche audiences outside of the mainstream remain key opportunities.

This post is an extract from a forthcoming MIDiA subscriber report available in January 2020: Demand Creation: What’s the Next Big Growth Curve for Music?

by Mark Mulligan
22 May 2020
The risk with trying to imagine what the future might look like is to simply think it is going to be a brighter, shinier version of today. At this precise moment in time, this has perhaps never been truer....

by Mark Mulligan
7 Aug 2020
We are excited to announce the first episode of the MIDiA Research podcast: What Next for Tencent? President Trump's executive orders concerning Bytedance and Tencent set the cat among the pigeons. In...

Tiga
2 Oct 2020
Hi, I was just wondering if there are supposed to be images attached to figure 1 and figure 2, as I cannot see them, Thanks! It's just hard to grasp the final message of the article without them :)
No thanks