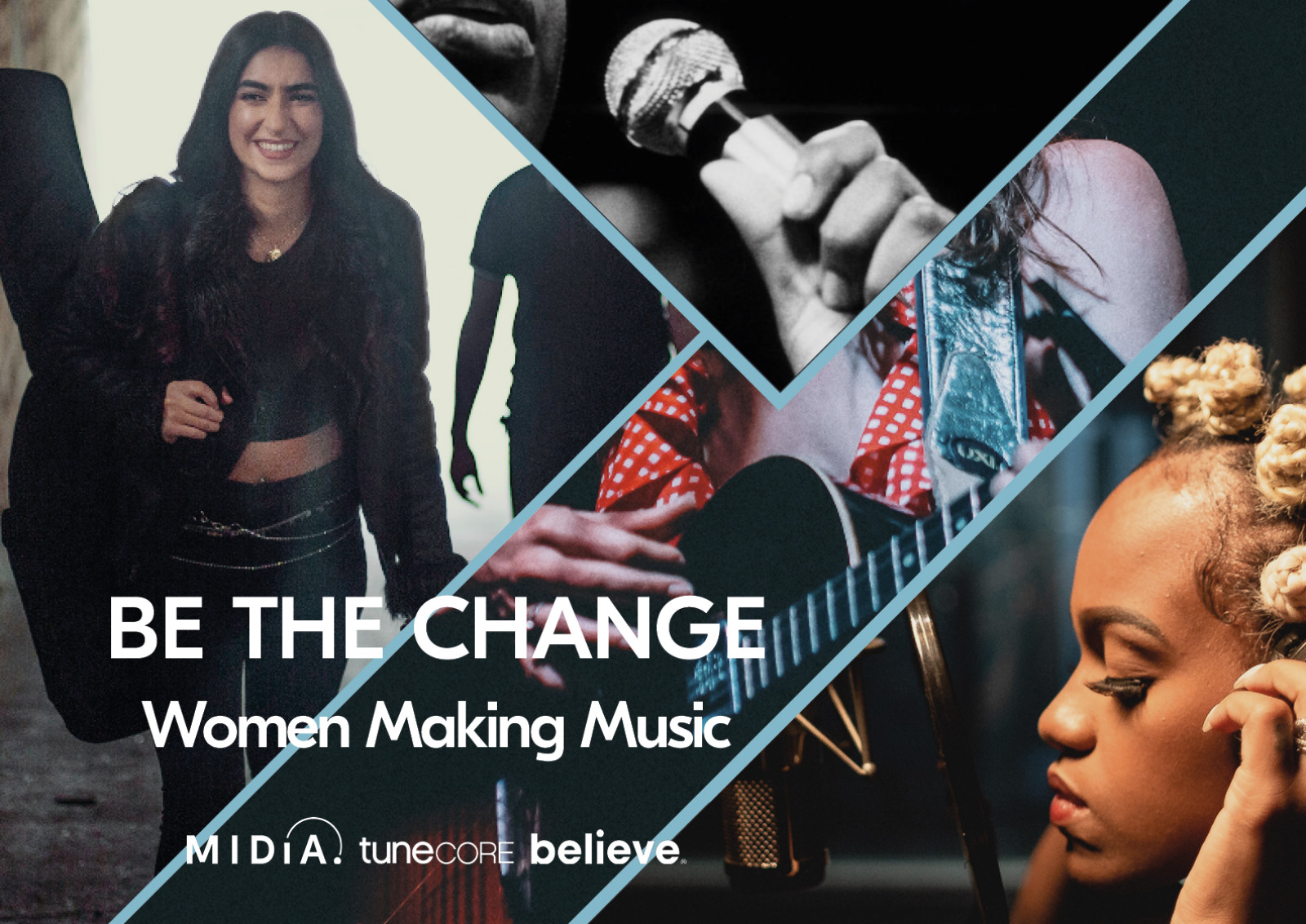 The study also commemorates Women’s History Month, building on and adding to the excellent work already being done by a plethora of women-first organisations. Through the results of the study, we better understand the uphill journey creators face, and hear from them first-hand about their experiences and perceptions, from direct forms of discrimination through to the endemic issues of under-representation, unconscious bias and damage to confidence.

The report, BE THE CHANGE: Women Making Music 2021, collates the views of 401 female creators –artists, songwriters, producers and DJs – from around the world, for the first time in music industry history. Many of them are independent artists, starting out on making a career in music with little support from the industry’s traditional infrastructure. Some are self-managed, running their own labels and production companies. Others are signed to labels or establishing themselves as songwriters, navigating their way through a complex, male dominated industry.

The challenges and barriers facing women in the music industry are becoming more recognised thanks to the work of a growing number of networks and industry groups. However, these challenges and barriers are still there, remaining poorly understood and unsolved. Many female creators, when asked what they thought has changed in recent years, agreed that transparency and discourse have improved – but also hold the view that real, material change remains harder to pin down. Phrases such as “tokenism” and “lip service” are commonly used to describe some of the current changes but there is also a clear, bold vision of what real change should be.

To that end, the report sets out priorities for progress based on what women creators around the world say they need now and in the future, to make the music industry more welcoming to women, and so that women creators are better represented, recognised and rewarded for their talent, ability and achievements.

Some highlights from the study:

Stated Andreea Gleeson, Chief Revenue Officer and Co-Head of TuneCore, “When I discovered that only 28% of TuneCore artists are female, I was surprised. While that’s better than the industry standard which indexes around 11%, it’s still not good enough. We partnered with MIDiA to figure out, when the barriers to entry are low, why then are women still so grossly underrepresented? The study reveals the main reasons behind why female creators feel unsupported and identifies key areas of improvement. It arms us with the information we need to do better. “

Denis Ladegaillerie, Chief Executive Officer of Believe commented, “At Believe, we take gender equality very seriously and it is part of the company’s DNA. Within the music industry, we collectively have a responsibility to change mindsets and behaviors in order to create a better environment for all women in our community.”

Srishti Das, MIDiA Research consultant and one of the co-authors of the report said: “Men have an important part to play in resolving the gender gap and being inclusive of all genders is where this begins. Ultimately, mixed-gender work environments will benefit from the separate and diverse skills of different genders – this seems to be the key message from women creators.”

Mark Mulligan, managing director at MIDiA Research added: “The objective of the study was to drive awareness to the issues, uncover the ‘why’, and inspire the industry to move forward with meaningful change.

“The issues, challenges and experiences highlighted in this report are not “women’s problems” to be solved just by women in the music industry. The findings of this study articulate a systemic inequity in the music industry today, requiring thoughtful consideration, commitment to change and courageous action. This is required not of any one faction of the industry, or by women alone, but by all the industry’s organisations and constituents.”

This survey was done in February 2021, with a carefully designed survey distributed on the web, assisted by a variety of music industry associations networks and influencers working directly on issues faced by women creators. For more details on the survey and the composition of its respondents, see the appendix.

TuneCore, owned by Believe, is the global platform for independent musicians to build audiences and careers -- with technology and services across distribution, publishing administration and a range of promotional services. TuneCore Music Distribution services help artists, labels and managers sell their music through Spotify, Apple Music, Amazon Music, YouTube Music, Deezer, TikTok and more than 150 download and streaming stores worldwide, while retaining 100 percent of their sales revenue and rights for a low annual flat fee. TuneCore Music Publishing Administration assists songwriters by administering their compositions through licensing, registration, worldwide royalty collections, and placement opportunities in film, TV, commercials, video games and more. The TuneCore Artist Services portal offers a suite of tools and services that enable artists to promote their craft, connect with fans, and get their music heard. TuneCore, part of Believe, is headquartered in Brooklyn, NY, with offices in Los Angeles, Nashville, Atlanta, and Austin, and global operations in the UK, Australia, Japan, Canada, Germany, France, Italy, Russia, India, Brazil as well as the LATAM, Africa and SEA markets. www.tunecore.com

Believe is a world leading digital music company, helping artists and labels to build their audiences and careers, at all stages of their development, in all local markets around the world with respect, expertise, fairness and transparency.  Pioneer in the digital world, Believe has developed an in-house technology & data organization, providing global distribution and digital marketing solutions. With more than 1,500 professionals in 50+ countries, Believe owns several brands, labels and companies including  TuneCore, Nuclear Blast, Naïve, Groove Attack and AllPoints. www.believe.com

Until video streaming cracks discovery, the challenges of retention will remain

by Hanna Kahlert
8 Mar 2021
The last 12 months have been marked mostly by the coronavirus pandemic, which has pushed much of life to the digital world. 70% of independent artists overall spent much of the time over lockdowns creating…

by Hanna Kahlert
28 Jan 2021
Even taking into account the impact of the pandemic, it has never been a better time for independent creators in the music business. The various 2020 lockdowns may have prevented artists from earning vital…

by Srishti Das
22 Mar 2021
MIDiA, in conjunction with TuneCore and Believe, is about to publish the findings of a global survey on the experiences of 401 female creators in the music industry: artists, songwriters, producers, DJs…

Anne
25 Mar 2021
It's great that the music industry is taking a closer look at barriers to entry and success for marginalized groups. That said, it's disappointing that this feminism is not intersectional. In the past year we witnessed what many hoped was an awakening of mainstream groups to the trauma and often insurmountable obstacles black and indigenous people in the United States face. But this report has nothing to say on this subject--beyond ageism, nothing to say about how much harder it is for people who belong to not one, but a number of oppressed groups to make it in the music industry and, truthfully, in practically all industries. The danger is that we will end up replicating this harm and lifting up the most privileged of women while doing little for those who need the most support. Data disaggregation is a beautiful thing.
No thanks