The record labels are weaning themselves off their Spotify dependency 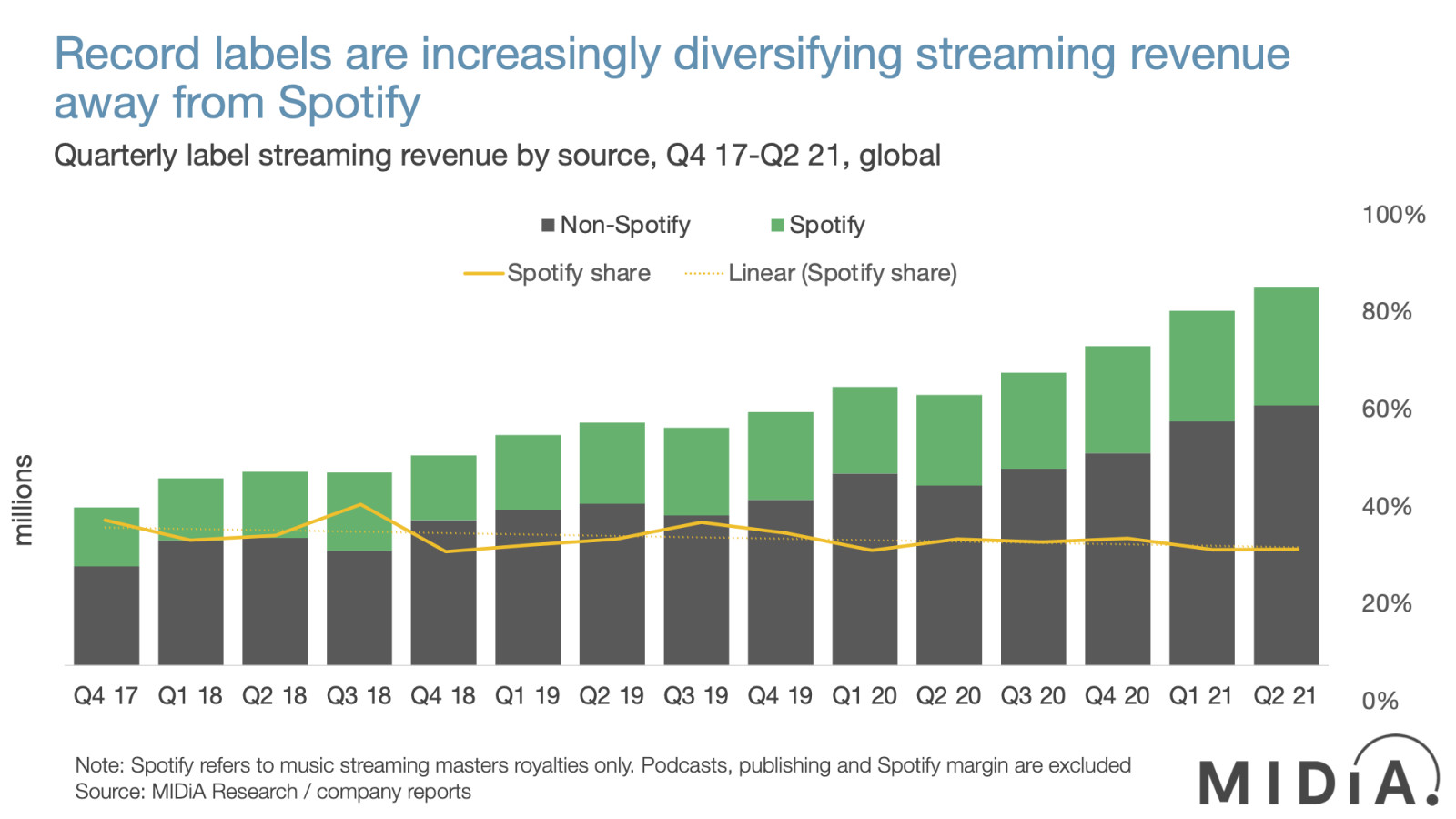 The major labels had a spectacular streaming quarter, registering 33% growth on Q2 2020 to reach $3.1 billion. Spotify had a less impressive quarter, growing revenues by just 23%. After being the industry’s byword for streaming for so long, Spotify’s dominant role is beginning to lessen. This is less a reflection of Spotify’s performance (though that wasn’t great in Q2) but more to do with the growing diversification of the global streaming market.

Spotify remains the dominant player in the music subscription sector, with 32% global subscriber market share, but streaming is becoming about much more than just subscriptions. WMG’s Steve Cooper recently reported that such ‘emerging platforms’ “were running at roughly $235 million on an annualized basis” (incidentally, this aligns with MIDiA’s estimate that the global figure for 2020 was $1.5 billion).

The music subscription market’s Achille’s heel (outside of China) has long been the lack of differentiation. The record labels showed scant interest in changing this, but instead focused on licensing entirely new music experiences outside of the subscription market. As a consequence, the likes of Peloton, TikTok and Facebook have all become key streaming partners for record labels – a very pronounced shift from how the label licensing world looked a few years ago. 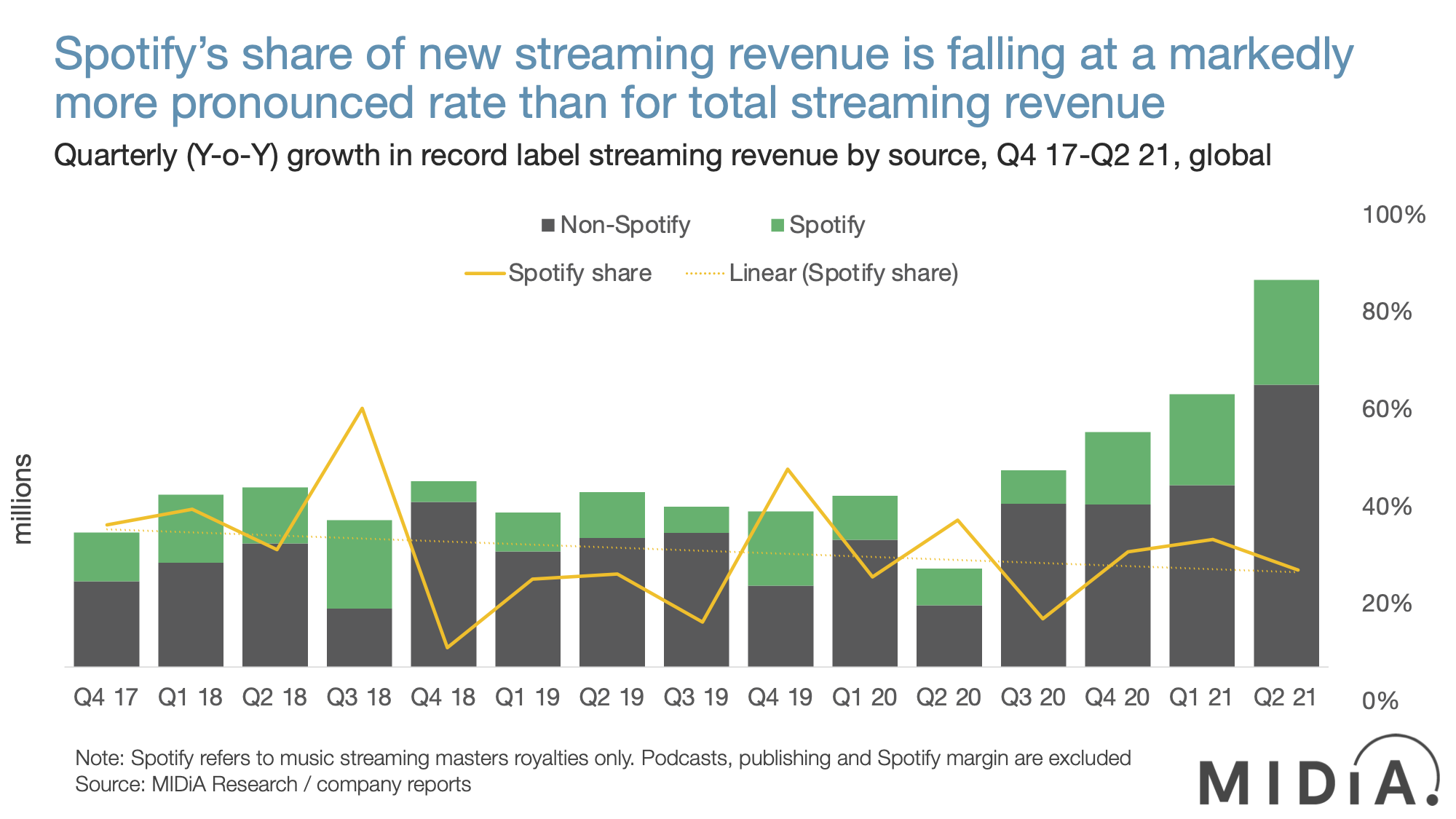 Looking at headline revenue alone, though, underplays the accelerating impact of streaming’s new players. Because Spotify already has such a large, established revenue base, quarterly dilution is typically steady rather than dramatic. Things look very different though when looking specifically at the revenue growth, i.e., the amount of new revenue generated in a quarter compared to the prior year. On this basis, streaming’s new players are rapidly expanding share. Spotify’s share of streaming revenue growth fell from 34% in Q4 2017 to just 26% in Q2 2021. Unlike total streaming revenue, the revenue growth figure is relatively volatile, with Spotify’s share ranging from a low of 11% to a high of 60% over the period – but the underlying direction of travel is clear.

Spotify remains the record labels’ single most important partner both in terms of hard power (revenues, subscribers) and soft power (ability to break artists etc.). But the streaming world is changing, fuelled by the record labels’ focus on supporting new growth drivers. The implications for Spotify could be pronounced. With so many of Spotify’s investors backing it in a bet on distribution against rights, the less dependent labels are on it, the more leverage they will enjoy. From a financial market perspective, the last 18 months have been dominated by good news stories for music rights – from ever-accelerating music catalogue M&A transactions to record label IPOs and investments.

Right now, the investor momentum is with rights. Should the current dilution of Spotify’s revenue share continue, Spotify will struggle to negotiate further rates reductions and will find it harder to pursue strategies that risk antagonising rights holders. Meanwhile, rights holders would be surveying an increasingly fragmented market, where no single partner has enough market share to wield undue power and influence. That is a place where rights holders have longed dreamed of getting to, but now – divide and conquer – may finally be coming to fruition.

Kylie Pappalardo
10 Aug 2021
Hi Mark, Thanks for this piece! I was wondering if you had thoughts about what this move towards greater diversification might mean for consumers? Though I acknowledge the problems with too much market concentration, one advantage of the music streaming landscape is that a consumer can subscribe to one service (whether Spotify or something else) and have access to most, if not all, of the music that they might want to listen to. The situation is very different in film and TV, where so much diversification means that consumers need subscriptions to multiple different services (sometimes at considerable cost) in order to access a base level of audiovisual content.
Steve Bunyan
9 Aug 2021
Thanks Mark - very interesting and insightful as always. I think the increased diversification of the streaming world is a very welcome development. I think it can only help secure streaming's continued growth.
No thanks