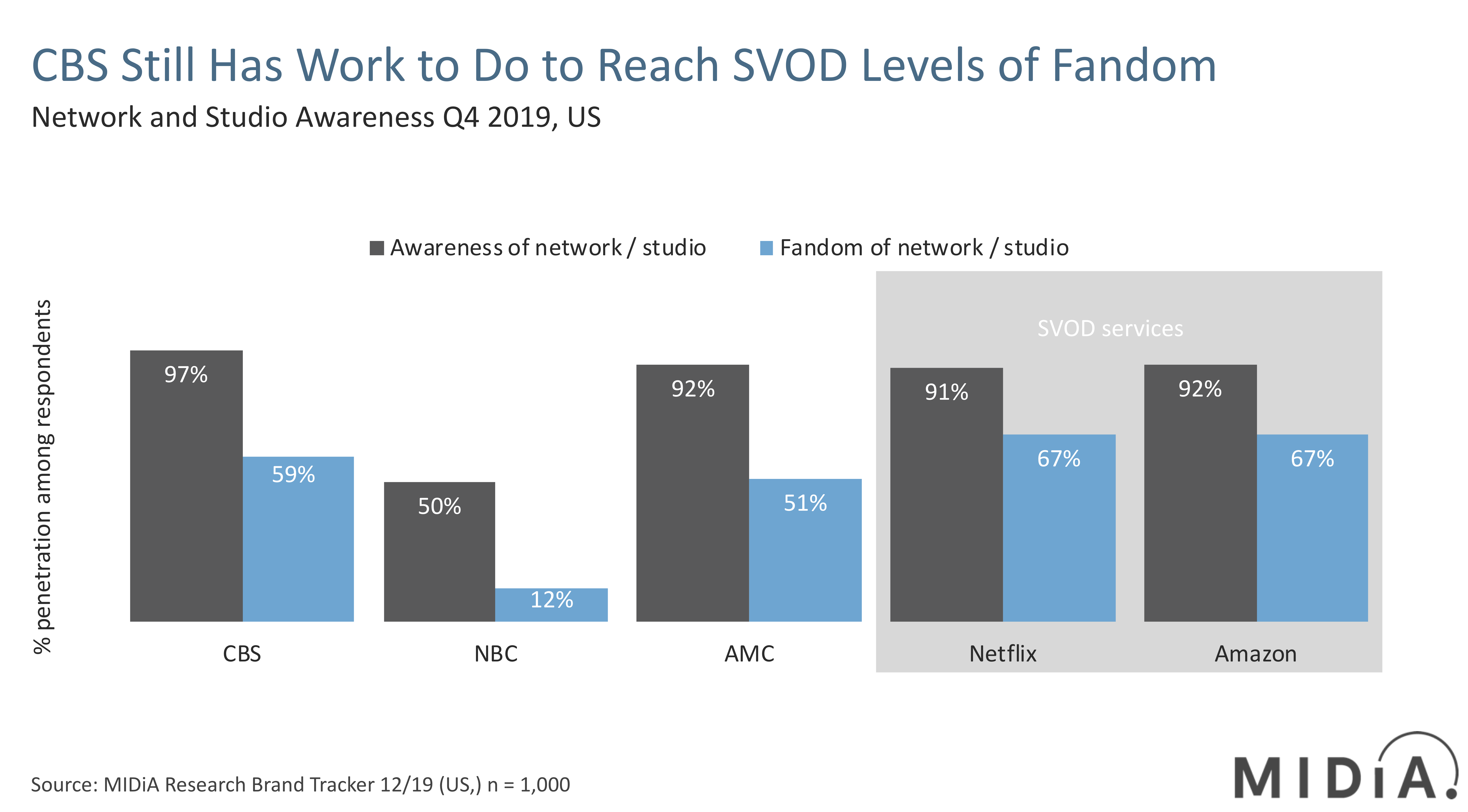 Last Thursday CNBC reported that the newly-merged ViacomCBS is planning to launch its own direct-to-consumer (D2C) service, with a formal announcement to be made during the company’s forthcoming fourth quarter earnings conference call on February 20th. While the details remain vague, ViacomCBS are promising to reveal for the first time the subscriber numbers and revenues for both Showtime and CBS All Access – the two D2C services which have been leading CBS’s push into D2C prior to the merger with Viacom closing in December 2019.

The decision to prioritise a D2C offering is a logical outcome of the merger and plays to both the existing D2C expertise of CBS (CBS All Access is now in its sixth operational year) and Viacom’s pre-merger focus on both creating content for streamers (Viacom International Studios) and acquiring streaming services – ad-supported video on demand (AVOD) service Pluto was acquired by Viacom back in January 2019. Critics of the merger identified the similarities of the combined merger to that of 21CF before it sold its non-news and non-sports assets to Disney, which was another traditional media powerhouse facing the challenge of disruption from the on-demand revolution unleashed by market leader Netflix.

The transition into a streaming-first future comes with inherent challenges, as MIDiA Research’s upcoming February report ‘Building Show Fandom in the Streaming Era’ highlights. Streaming audiences are inherently different to linear audiences, with a key differentiator in the battle for winning audience share in the D2C era now revolving around fandom and the weaponisation of content. Although ViacomCBS is a strong player in the domestic linear market, its D2C reach is minimal to-date (CBS All Access weekly active use in Q4 2019 was only 5%). However, as the above chart demonstrates, CBS outperforms fellow broadcaster NBC in both awareness and content fandom. It even outperforms scripted drama fandom powerhouse AMC for fandom. However, when placed alongside the leading subscription video on demand (SVOD) services it trails behind in fandom. This will come as no surprise to SVOD subscribers as the ad-free, schedule-free environment of the growth-oriented streaming services trends towards niche appeal content – which resonates for multiple niche audience groups, while linear TV remains trapped within the need to create time-constrained, mainstream content which avoids alienating advertisers.

It is do-or-die time for ViacomCBS

Ever since Rupert Murdoch threw in the proverbial towel and sold the lion’s share of his TV empire to Disney, the writing has been on the wall for media companies sitting in the kill zone between the user generated and DIY content of social video and the high production value scripted dramas of SVOD. Murdoch saw clearly that the only companies with a realistic chance of succeeding long term in the new streaming era were either able to avoid high production costs or able to control the cost of access to their content. 21CF had neither of these levers to pull and crucially failed to control its own distribution infrastructure.

ViacomCBS has to-date been light on D2C assets despite the long track record of CBS All Access. The recent acquisition of Pluto and the seeming desire to merge mainstream show outlet Showtime into a forthcoming D2C proposition provides the media conglomerate with the foundations required to build a competing service in what is becoming a very congested marketplace. Whether it succeeds, especially in the wake of the forthcoming launch of rival TV ad giant NBCUniversal’s Peacock, which will be AVOD, SVOD and SVOD ad-free, will predominately come down to just how serious ViacomCBS is about the D2C pivot. Unless they make the Disney “bet-the-farm” bold strategic commitment, success will prove elusive as the deep pockets of the its SVOD rivals will attest to.