Game of Thrones Is Not The Most Popular TV Show 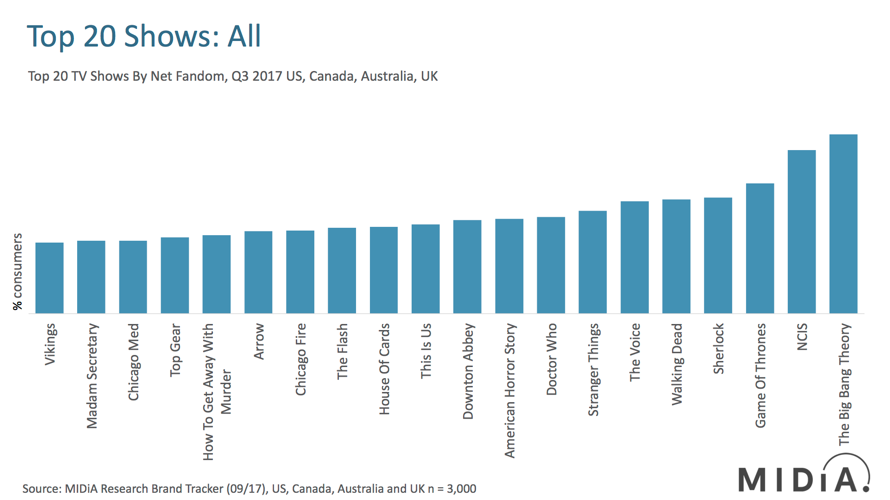 The TV industry is currently undergoing a period of disruption as profound as what the music industry experienced in the first decade of this millennium, and it has all been led by the streaming revolution. This shift has enabled Subscription Video on Demand (SVOD) to become to the digital successor to cable and satellite based pay-TV. SVOD has liberated consumers from the constraints of scheduled linear programming, advertising and generic four-quadrant content (programmes commissioned to appeal to under 25s, over 25s, female and male audiences.) The result has been a huge uplift in SVOD subscriptions, with industry leader Netflix seeing its paid subscriber base grow by 158% from 66 million in Q3 2015, to 104 million in Q2 2017.

Alongside this has been an explosion in content budgets to cater to this new audience. Netflix and Amazon are leading the charge, in their bid to win subscribers and gain market share globally. This phenomenal growth and the accompanying strains on TV Networks’ resources are extensively detailed in MIDiA Research’s report on The Emerging Content Bubble. However, the significant increase in expenditure and the removal of traditional commercial constraints has ushered in a golden age of TV, led by scripted drama flagship shows such as HBO’s critically acclaimed Game Of Thrones.

Nonetheless, critical acclaim and filter bubble echo chambers in the media highlight a glaring problem for TV networks: how do they measure audience engagement? In the world of traditional TV, the networks relied on the overnight ratings primairly from a controlled sample panels of viewers. But this only captured TV channel viewing. SVOD services and TV channel apps were areas beyond the measuring capabilities of these organisations. A new metric was required – one that measures TV show fandom across digital platfroms. Since MIDiA Research initiated its first quarterly brand tracker back in Q4 2016, we have been collecting quaterly consumer data on TV show fandom, alongside digital consumption activity, and the findings have been fascinating.

Move over Game Of Thrones, it’s now all about The Big Bang Theory

HBO’s Game Of Thrones may have the critical acclaim and social buzz, but it was relegated to third place in the TV show fandom rankings, behind CBS’s hit shows The Big Bang Theory and NCIS. Segmenting the audience by age demographics significantly impacts the ranking of Game Of Thrones, as the show is pushed even further down to sixth highest TV show by fandom. 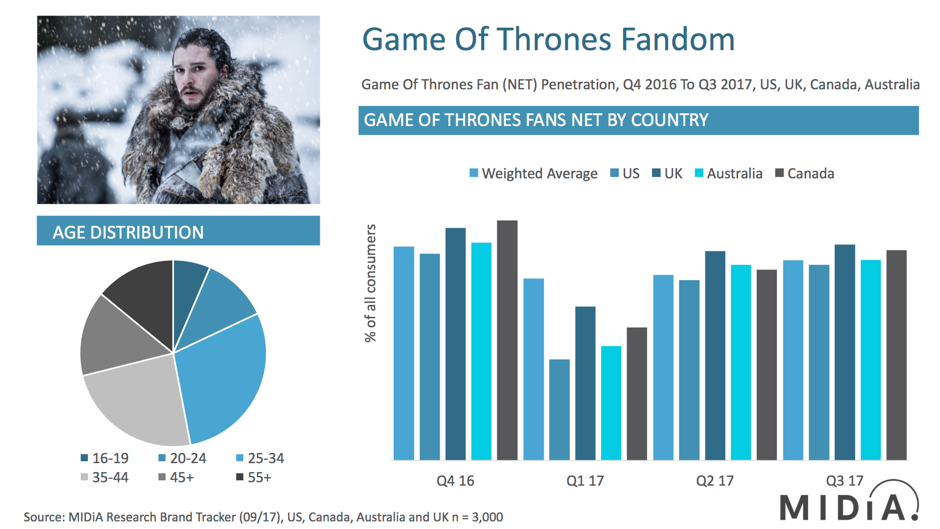 As an illustrative example of sample bias 41% of US Game Of Thrones fans are Twitter users compared to 31% for US The Big Bang Theory fans and 46% for US Westworld fans which is another social success for HBO.

The lessons from these findings are simple. Firstly, popular shows on linear TV are also popular with digital consumers. Secondly, brand identity for TV shows in the digital era is crucial.

In a digital landscape where consumers are bombarded constantly with information, and use a multitude of diverse digital services and social apps, cultivating a sense of fandom affinity among viewers is key. When you have to go to where your audience is, rather than  relying on them to come to you, a visceral connection between the consumer and your content becomes key. And as the tech majors jockey to become the next generation TV operators, understanding the importance of digital TV audience engagement is crucial for TV networks, if that are to successfully navigate the tumultuous conditions of digital disruption that streaming has unleashed.