BE THE CHANGE: Measuring the music industry’s inclusivity and diversity issue 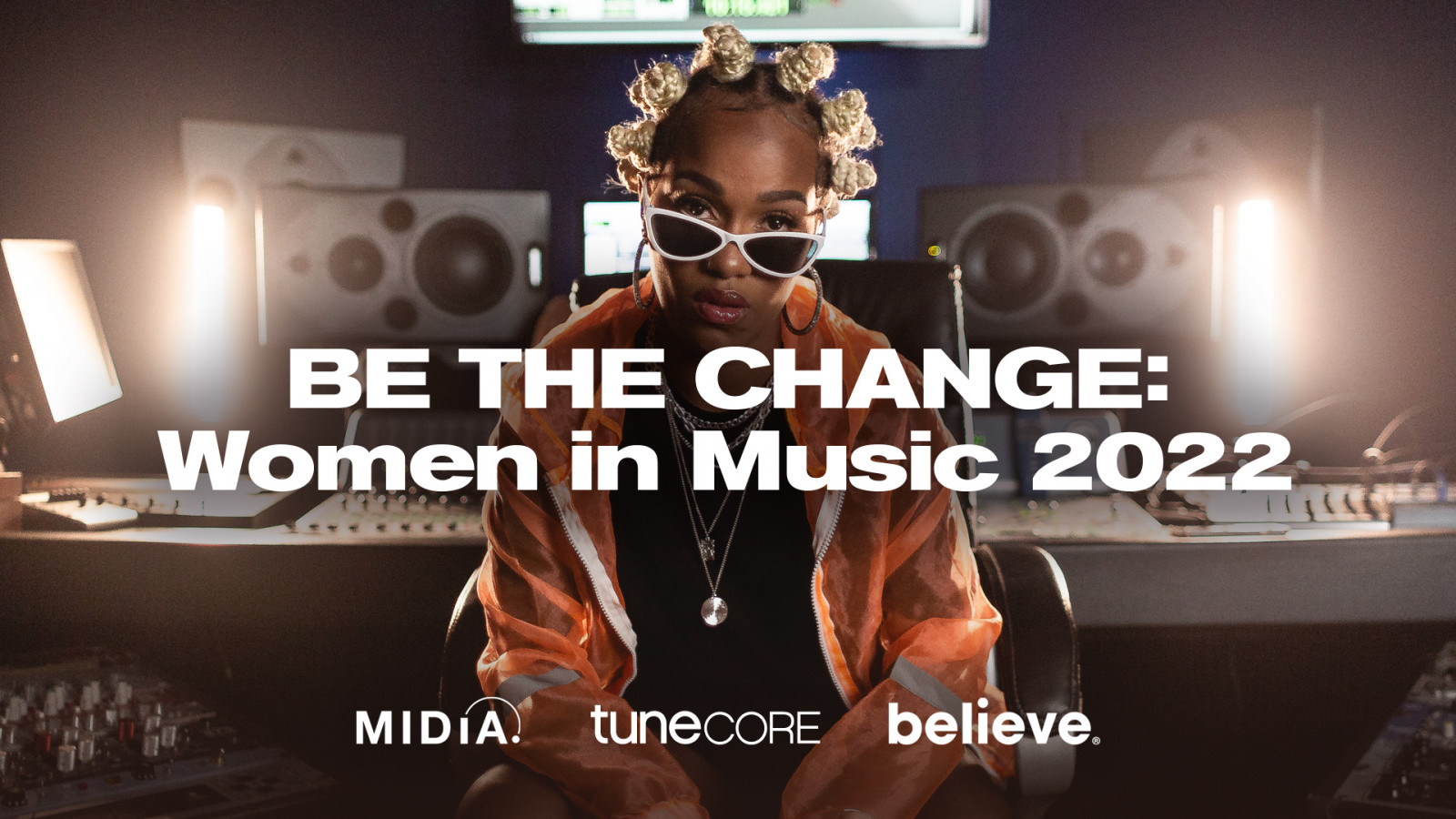 Last year, MIDiA Research along with TuneCore and Believe conducted a study BE THE CHANGE: Women making music. The study was based on the experiences of female creators and the hurdles that they face in creating, producing, and getting their music out there. This year, we are ready to take the study forward with version 2.0 – another step towards increasing awareness about the growing need for more inclusion and diversity in the music industry.

Where is the music industry on diversity and inclusion?

The aim of this year’s BE THE CHANGE study is to dive deeper into the issues that were uncovered in last year’s ground-breaking report. Its scope will widen to include the hardships faced by other gender identities, as well as the incremental challenges that are still ongoing post-pandemic. Through the participation of numerous industry partners, such as Women in Music, We Are Moving the Needle, CD Baby, Songtrust, Ableton, Splice, et. Al., the aim of this survey is to reach more creators on a truly global scale. This next version of the study also aims to hear from men about their perception of gender issues in the music industry, and how they are contributing to improvements.

Gender and identity issues are not going away

Last year’s study revealed that some of the barriers that women face in the music industry are becoming more acknowledged thanks to the growing number of networks, industry groups, and active discourse through many widely spread movements (with the help of social media). Nonetheless, there are still many challenges and obstacles, many of which remain misunderstood and unsolved.

In December 2020, Palestinian techno artist Sama’ Abdulhadi was imprisoned for eight days after coordinating and playing a livestream event for Beatport in Jerusalem. Even though all permits were properly secured, when the word got out that a woman representing the LGBTQ+ community was playing and organising such an event, problems began. An angry crowd turned up in protest, shutting down the show and looking for someone to blame for the perceived impropriety. This became a global issue powered by the women and LGBTQ+ community in dance music, supported by men – proving there is much to achieve when everyone fights together. Adbulhadi is recognised as a leader of the burgeoning, although still largely underground, Palestinian electronic scene since her 2018 Boiler Room set went viral. Abdulhadi had intended to use the live stream to showcase artists from Palestine and the Middle East during the pandemic.

Gender issues today are by no means limited to woman in the industry. They extend to people of colour and anyone who is non-heterosexual or non-cisgender. These issues have moved further into an identity issue. Last week, the BRITS decided to remove gender-specific categories in order to be a more inclusive award show. Adele, who won the award for the BRIT Awards Artist of the Year, faced backlash as she exclaimed, “I understand why the name of this award has changed but I really love being a woman and being a female artist!” As a result, many have called Adele a TERF (trans-exclusionary radical female). This controversy demonstrates the pitfalls that can undermine the power of progress which happens through unity – and, considering most (if not all) of the critics did not actually seem to be members of the trans community, highlights the problems inherent in the politicisation of identity. Namely, anyone with a microphone feels obliged to weigh in when they are made to feel uncomfortable by progress, regardless of their own role to play. Adele, a grown woman singing about her experiences as a woman, speaks for herself – but controversy can arise even from this, silencing voices that try to drive change and the empowerment of those less empowered.

Men as allies are important now more than ever

Men have an important part to play in resolving the gender gap – and being inclusive of all genders is where this begins.Music composition, production and sound have long been considered (by men) as the 'domain" of men, making it no surprise that the majority of female creators (63%) feel excluded – thus perpetuating the male-dominated nature of these fields. Ultimately, mixed-gender work environments will benefit from the separate and diverse skills of different genders – this was a key message from women creators in the study last year.

This year we are looking at how we can actively bring men into the conversation. The truth is, these have never been strictly “women” or “minority” issues; these are industry issues, and the time has come for everyone to work together and consistently grow the pie instead of slicing it into inequal parts.  With a prominent lack of representation on the recent Billboard 2022 power list, and with nine out of 10 highest-paid musicians of 2021 being men, one thing is clear: women still do not hold influence in the music industry, and it is probably worse for other gender identities.

Improving diversity is not just about bringing in more female artists and creators who fit the same old moulds. It is about promoting more women in the industry on all fronts from executives to creators, bridging the pay gap and more. Through this study we hope to bring to light what the industry needs today to bring transformative diversity and inclusion.

You can sign up to our mailing list to keep up to date with the study here . If you would like to get involved in the study as an artist, executive, or otherwise, we would love to speak with you. Please get in touch by emailing: srishti@midiaresearch.com or hanna@midiaresearch.com.

by Kriss Thakrar
11 Feb 2022
In previous posts, we have talked about the possibilities opening up for the next generation of creators . In particular, posts on fluid audio and social studios showed how music has the potential to become...

Hanna K
8 Mar 2022
Happy international women's day! We hugely appreciate everyone who has taken the time to reach out to us about this topic, and understand that there is always more that can be done. Terminology is always going to be one of the tricky ones. For example, does 'genderised' absolve men, or does it make gender inequity sound like the affliction that it is? After thinking about this very carefully, we have taken on board feedback and have changed the following: "Music composition, production and sound has long been connected primarily with men, so it is no surprise that the majority of female creators (63%) feel excluded from composition and production, which makes this aspect of music creation highly ‘genderized’." To: "Music composition, production and sound have long been considered (by men) as the 'domain" of men, making it no surprise that the majority of female creators (63%) feel excluded – perpetuating the male-dominated nature of these fields."
Gabz D Rock on
2 Mar 2022
Please fix the term "genderised". For god's sake, call it what it is. Male dominated industry. You sugar coat it, the men don't care as they havent been called out. Your making the responsible party for the imbalance invisible. Stop it.
Nana Motobi
1 Mar 2022
Great job . I personally look at bringing equality in the gender gap (men and women equality ) in productions and promotion. I would like to partake in this summit /survey . I am a man and currently the artistic director for a festival dedicated to the independent woman “Amoahbia Festival” where music plays a major role.
No thanks