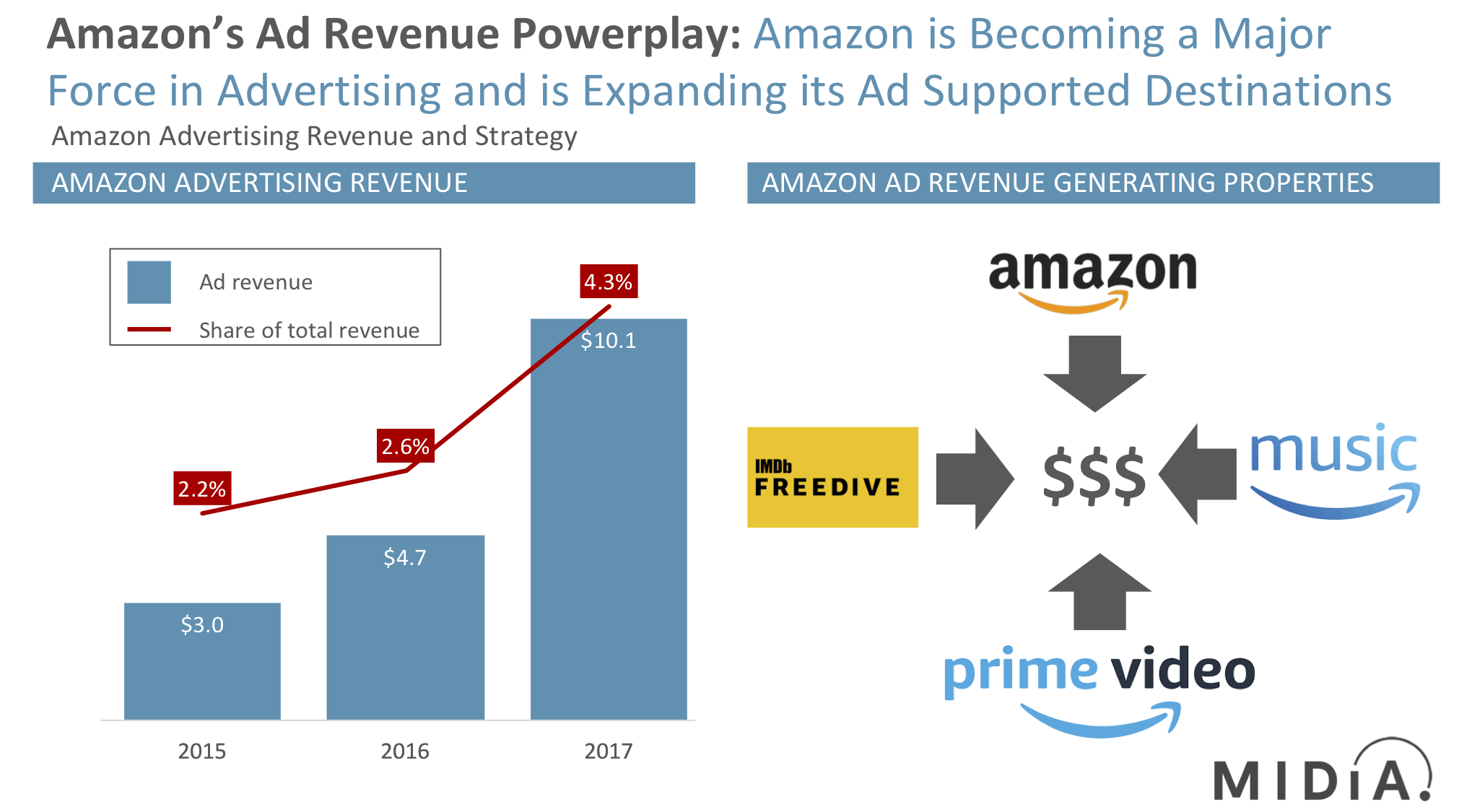 Amazon is reportedly close to launching an ad supported streaming music offering. Spotify’s stock price took an instant tumble.But the real story here is much bigger than the knee-jerk reactions of Spotify investors. What we are seeing here is Amazon upping the ante on a bold and ambitious ad revenue strategy that is helping to reformat the tech major landscape. The long-term implications of this may be that it is Facebook that should be worrying, not Spotify.

In 2018 Amazon generated $10.1 billion in advertising revenue, which represented 4.3% of Amazon’s total revenue base. While this is still a minor revenue stream for Amazon, it is growing at a fast rate, more than doubling in 2018 while all other Amazon revenue collectively grew by just 29%. Amazon’s ad business is growing faster than the core revenue base, to the extent that advertising accounted for 10% of all of Amazon’s growth in 2018.

The majority of Amazon’s 2018 ad revenue came from selling inventory on its main platform. This entails having retailers advertise directly to consumers on Amazon, so that Amazon gets to charge its merchants for the privilege of finding consumers to sell to, the final transaction of which it then also takes a cut of. In short, Amazon gets a share of the upside (i.e. the transaction) and of the downside (i.e. ad money spent on consumers who do not buy). This compressed, redefined purchase funnel is part of a wider digital marketing trend and underlines one of MIDiA’s Four Marketing Principles.

But as smart a business segment as that might be to Amazon, it inherently skews towards the transactional end of marketing, and is less focused on big brand marketing, which is where the big ad dollar deals lie. TV and radio are two of the traditional homes of brand marketing and that is where Amazon has its sights set, or rather on digital successors for both:

It's all about the ad revenue

Right now, Amazon is a small player in the global digital ad business, with just 6% of all tech major ad revenue. However, it is growing fast and has Facebook in its sights. Facebook’s $50 billion of ad revenue in 2018 will feel like an eminently achievable target for a company that grew from $2.9 billion to $10.1 billion in just two years.

To get there, Amazon is committing to a bold, multi-platform audience building strategy. Whereas Spotify builds audiences to deliver them music (and then monetise), Amazon is now building audiences in order to sell advertising. That may feel like a subtle nuance, but it is a critical strategic difference. In Spotify’s and Netflix’s content-first models, content strategy rules and business models can flex to support the content and the ecosystems needed to support that content. In an ad-first model, the focus is firmly on the revenue model, with content a means to an end rather than the end. (Of course, Amazon is also pursuing the content-first approach with its premium products.)

Amazon is becoming the company to watch

So, while Spotify investors were right to get twitchy at the Amazon rumours, it is Facebook investors who should be paying the closest attention. Amazon’s intent is much bigger than competing with Spotify. It is to overtake Facebook as the second biggest global ad business. None of this means that Spotify won’t find some of its ad supported business becoming collateral damage in Amazon’s meta strategy – a meta strategy that is fast singling Amazon out as the boldest of the tech majors, while its peers either ape its approach (Apple) or consolidate around core competences (Google and Facebook). Amazon is fast becoming THE company to watch on global digital stage.