A View To a Sure Thing: Why Apple and Amazon Want James Bond Last week the Hollywood Reporter revealed that Apple and Amazon were joining Warner Bros in the bid to win the film distribution rights of James Bond titles from MGM Holdings, the parent company of MGM, which currently owns the video rights for the James Bond film properties. Currently, the deal for the film franchise is restricted to what is still defined as the home box office distribution rights. However, there is speculation that MGM is actually prepared to sell the underlying film rights behind the video distribution rights, for what is one of the most valuable film franchises in the history of Hollywood.

From 1961, when Dr No, the first Bond film was released (earning 54 times the cost of its $1.1 million production budget), to the 2015 release of Spectre, the latest instalment in the franchise, 007 has been a proven revenue generator for the film industry. In its six-decade history, all but two of 24 films released have been profitable, generating the three times return on production budgets required to cover marketing, distribution overheads and to generate a profit for the production studio. Of the $6.8 billion revenue generated by the franchise, nearly half has come in the last nine years, corresponding with British actor Daniel Craig’s stint as the iconic protagonist James Bond. 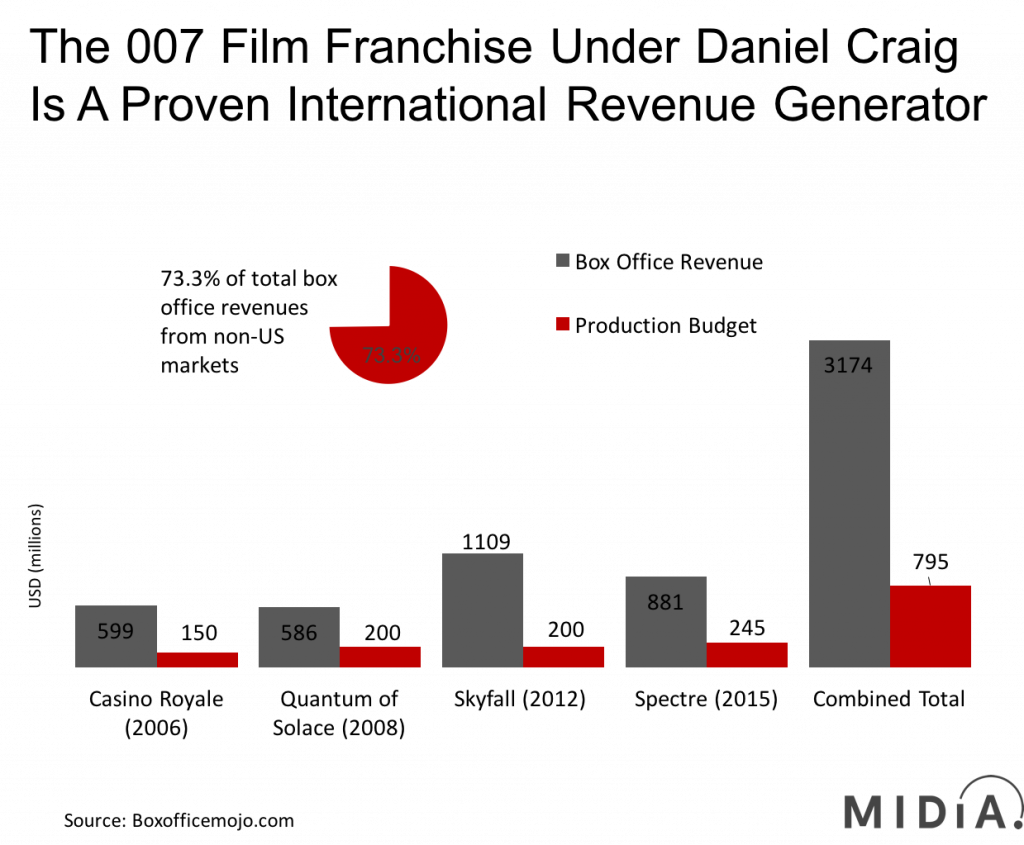 In a hits business, you want to cover as many bases as possible

James Bond is a four-quadrant movie franchise in that it appeals to all four major film-audience demographic quadrants: the under 25s , over 25s, females, and males. For a non-traditional film or TV business looking to establish itself as a mainstream home-entertainment destination for premium video, a four-quadrant film franchise with a strong track record of generating profits is a must have, especially when the majority of revenue is generated outside of the US. The real opportunity potential of the rights, which is now in play, is that they cover the distribution and video rights for the Bond franchise. The copyrights and trademarks for the film properties are jointly owned by Santa Monica-based Danjaq (the holding company for Eon Productions which has produced all except one of the 24 Bond films) and MGM. However, MGM owns the video and the distribution rights, meaning that whichever entity acquires these rights controls the video destiny of the 007 franchise. (The publishing rights to the James Bond brand are separately owned by Ian Fleming Publications, which is controlled by the author’s family. In 1952 Fleming astutely acquired his publishing company with the proceeds from his first Bond novel Casino Royale.)

Whoever acquires the James Bond video and distribution rights is therefore in a position to develop the video potential of the 007 franchise beyond blockbuster films into scripted drama, and character treatment spin-offs, leveraging a rich story world that appeals beyond the sci-fi limitations of Star Wars, or the super hero boundaries of the Marvel franchise. The young Bond prequel novels penned for Fleming publications by British author Charlie Higson provide an indication of just how much scope there is to develop the franchise beyond the current mainstream understanding of what James Bond means to video audiences.

In a year where Amazon has picked up its first best picture Oscar, and Apple is recruiting seasoned film executives, scouting out movie studio locations and committing to billion-dollar annual content budgets, the headline agenda point in streaming video strategy meetings is now Bond…James Bond.