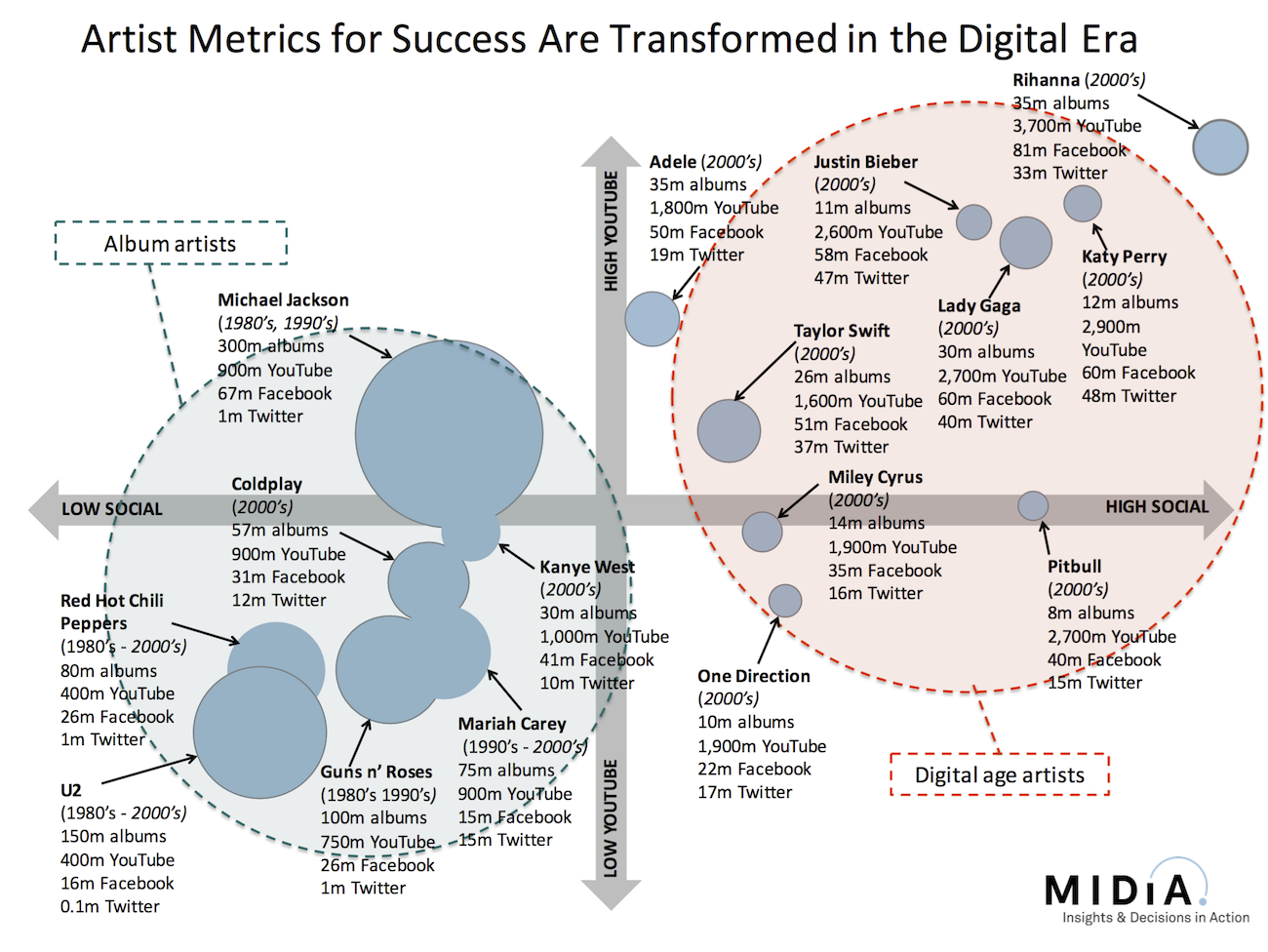 Or rather the music industry just broke the chart’s back with YouTube, although it doesn’t realise it yet. And here’s why…

It is normal when switching between old and new worlds to use equivalents, deutschmarks to euros, inches to centimetres, circulation numbers to unique visitors etc. So it was entirely understandable that once digital came along the record labels started creating equivalents. First it was album equivalents to deal with the fact that download sales were skewing towards single tracks, then came equivalent sales to translate audio streams into singles and albums. Now the RIAA has just announced that 1,500 YouTube views counts as an album sale. It might feel like a natural transition but it is in fact that hair that is going to break the camel’s back.

Music consumption is undergoing a dramatic transformation, with access replacing sales. Consequently the role of charts is changing, and yet many music industry people are still trying to use them as sales indicators. Charts are the record labels’ currency, their measure of success. But as fewer people buy music their relevance inherently diminishes. Labels though aren’t willing to let them go.

As one now-former senior major label executive once said, ‘record labels only care about three things: revenue, market share and charts’. For better or for worse, major labels have done a good job of making the first two work in the streaming arena by weighting deals towards up front payments and guarantees determined by their market share data. But they haven’t managed to make charts work properly.

It Is Time For Charts To Fork Into Two Different Measures

Herein lies the heart of the matter. If charts are going to measure consumption they need to be considered as ratings, as airplay charts. Don’t dress them up as something they are increasingly not. It is time to for charts go big or go home. Charts now need to split into two:

Doing a mixture of both does neither well.  Doing each individually creates two clearly distinct and highly useful measures that will properly serve labels, artists and their managers. Sales (CDs and downloads) still represent 71% of all recorded music revenue and even by 2020 they will still represent half of revenues. Buyers are far too important a segment to write off with a measure that is not fit for purpose. Equally, streaming can only be properly measured by making this measure reflective of all major consumption points. As the graphic from my book ‘Awakening’ shows, what constitutes success metrics for an artist has changed dramatically. Sales are only a small part of the picture for many contemporary artists.

Equally important is how consumption behaves differently from sales. Sales charts typically move more quickly because they measure one-off events and do not capture the subsequent consumption behaviour. While consumption driven charts move more slowly because they measure the more persistent dynamic of popularity. The music industry has long been aware of these crucially different measures because of the existence of radio air play charts alongside sales charts. With the current mish-mash we have a measure that is neither, and that hides the true meaning of each.

The changes in music consumer behaviour have now got to a point where old world equivalents are becoming meaningless and frankly, just not very useful. Now is the time for charts to fork into two specialisms that help the music industry truly understand how two very different parts of its business are actually performing. It is time for charts to go big or go home.

david apps
10 Feb 2016
it is a hard one to work out or get an open and frank conversation at a high level. The two sections covering sales are easy Sales pus downloads is total physical sales. All the rest are just listening or viewing which ends as soon as the tape stops
Martin Goldschmidt
9 Feb 2016
Great article, I completely agree. Own goal.
Rod Harrod
5 Feb 2016
Talk about shooting your self in the foot. Mark Mulligan is absolutely right. If its not enough the industry has had to suffer outside interference now we're being attached, like a worm in the ear, from the inside. Wind the clock back...its simple...what business is it...music...ask the man in the street what charts mean...SALES of MUSIC not borrowing, stealing or occasional listening...OWNING...the Board of the RIAA should either withdraw this ridiculous move or resign en bloc.
No thanks