Spotify, Pandora And YouTube: In Search Of The Real Value Of Free The music industry remains in a fix over free. The freemium wars in late 2014 almost saw the freemium tier of Spotify turned off in the face of pressure from Apple’s Jimmy Iovine. The majors eventually decided to stick with freemium but the free music wound continues to fester, with YouTube the new public enemy number one. Free though, is far from anything new. Indeed, radio has long been the main way that people consume music, and as the ever insightful David Touve observed, the (US) blended ARPU for radio / music sales ($25.08) is almost identical to Spotify’s blended (free and paid) ARPU ($26.11). Despite this though, rights owners are developing an increasingly binary view of free streaming. It is against this backdrop that Spotify announced 100 million users and that news emerges that SoundExchange revenue growth looks set to remain locked in single digit percentages for 2016 (SoundExchange is the body that collects Pandora revenues for the labels).

Spotify’s User Numbers Are A Directional Measure, Not A Precise Count

Spotify’s official total user numbers have always been a directional measure rather than an absolute one and so should be taken as an indication of how quickly the service is growing rather than how big it has got. For example, between June 15 and June 16 Spotify’s total user numbers grew by 25 million, that’s just 2.1 million new users per month, which isn’t particularly spectacular for a digital service in growth phase. Even Facebook, which long since passed its growth peak, grew by 218 million over the prior year (18 million a month) while WhatsApp grew by 350 million (29 million a month). Not apples-to-apples comparisons, but the underlying premise remains: 2.1 million new users is not stratospheric growth. In reality Spotify is growing faster than that but many (most?) of its new users churn out relatively quickly. Spotify’s active user number is a measure of its residual regular user base. So while 25 million may not be a lot to show for a year of growth, the growth rate of 33% is more impressive. 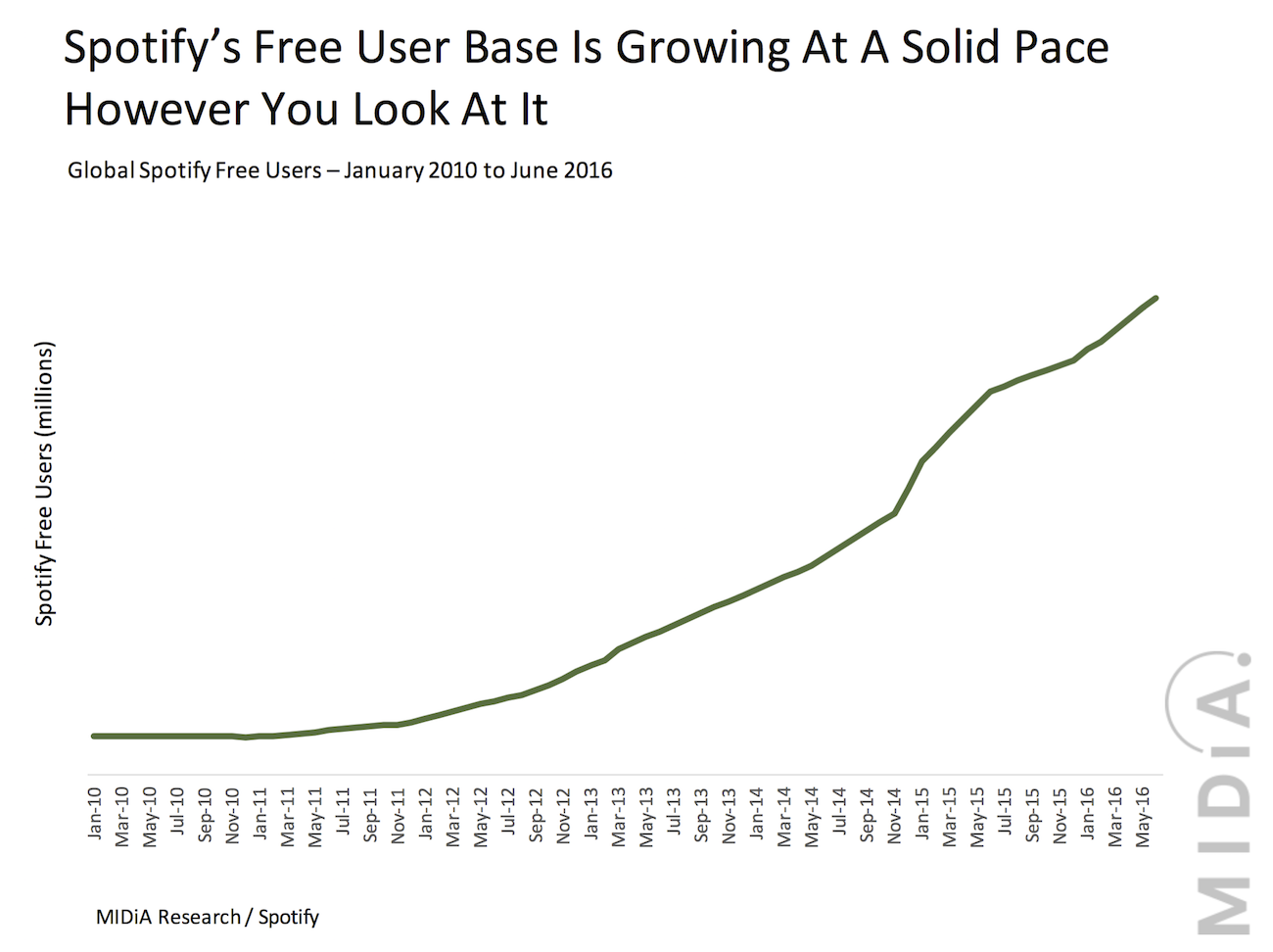 With the above caveats considered, taking Spotify’s active user number and then removing paid users to give us total free users we end up with an intriguing trend (see figure above). We end up with 68.4 million free users, up 24% from 55 million in June 2015. Most interestingly though, growth in free users picked up in June 2015. Paid user growth picked up too, but even with this conservative measure of users there is no escaping that Spotify is significantly growing the installed base of free music users in the marketplace.

Even more interesting though is the revenue impact. When we divide the total number of US free audio streams (mainly Spotify) by total label revenue generated we end up a US per stream rate of $0.0011. When we do the same for YouTube music streams and label revenue in the US we end up with a per stream rate of $0.0013. Yes, you read correctly, YouTube is actually paying out more than Spotify free in the US! On a global level the picture is very different, with YouTube’s per stream rate far lower (in the region of $0.0008). But the US is nonetheless an indication of the potential YouTube has in a market where the digital ad market is mature.

Pandora Is Feeling The Spotify Pinch

The final part of this free music puzzle is Pandora, whose active user number has stabilized at around 79 million after years of continued growth. What is the cause? Well YouTube has been in the US for many years, Spotify has not. For all Tim Westergren’s insistence that Spotify doesn’t cannibalize Pandora, it does...all the more so now that curated playlists are becoming the driving force of Spotify’s audience behaviour.

The major labels have never been Pandora’s biggest fans, largely because they dislike the fact it operates under a statutory license, which means they cannot strike direct deals like they do with most other streaming services. But the $803 million paid out in 2015 (of which Pandora was the lion’s share) is hardly small change and there will be concern that this revenue stream is slowing, especially considering that Spotify only contributed around $158 million in ad supported revenue in 2015 in the US.

Free Is Here To Stay, So It’s Time To Fix It Not Fight It

Whether the industry likes it or not, free is an ever larger part of the digital environment. There are clearly flaws in many, perhaps all, of the business models currently in market but the consumer behaviour is inescapable. Simply put, free streaming is the future of radio. Just as most people will only ever be radio listeners, so most digital consumers will only ever be free streamers. So the focus right now should not be fighting free, but figuring out how to make it work better.