Radio Is Streaming’s Next Frontier 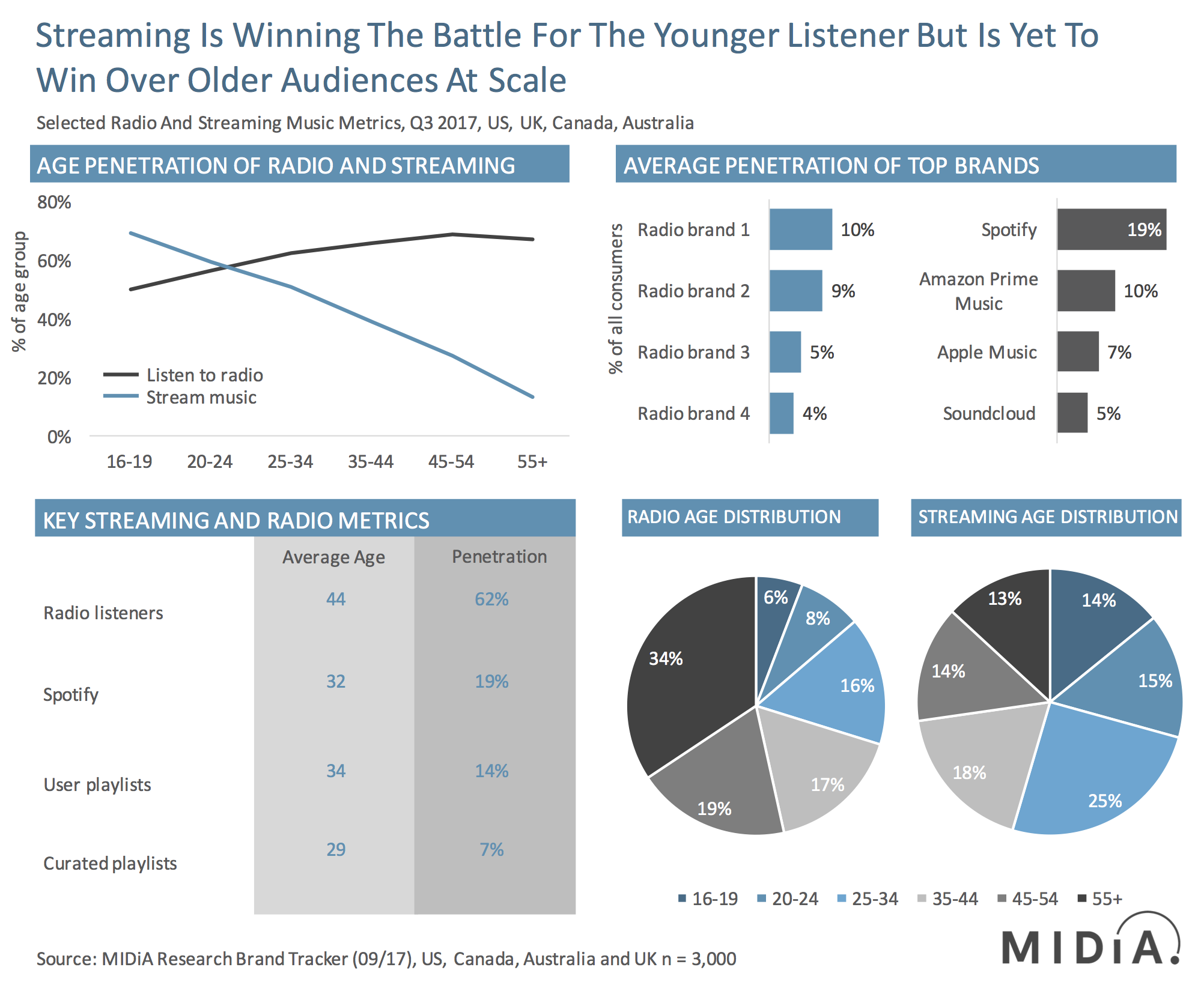 This week MIDiA held its latest quarterly research and networking event at Gibson Brands Showrooms in the heart of London’s West End. The event was heavily over-subscribed and was a great success (there are some photos at the bottom of this post).

The event combined a presentation from Pete Downton, deputy CEO of our event sponsor 7digital, a keynote from myself and a panel of leading industry experts. Here are a few highlights of my presentation. Streaming music has got where it has today largely by being the future of retail and replacing the download model, which in turn replaced the CD model (though vestiges of both remain). That premium model will continue to be the beating heart of streaming revenues for the foreseeable future but will not be enough on its own. The next big opportunity for streaming is to become the future of radio, which incidentally is around double the size of the recorded music market. In doing so, it will be a classic case of disruptive insurgents stealing market share from long-standing incumbents.

The opportunity for streaming is to build ad revenue around the younger audiences that are simply not engaging with traditional radio in the way that previous generations of young music fans once did. As the chart above shows, radio’s audience is aging and has an almost mirror opposite demographic profile to streaming. What is more, radio’s audience is declining by around one percentage point each quarter. It might not sound like much, but you normally do not measure change in terms of consistent quarterly trends. Instead there is normally quarterly fluctuation. So, this is nothing short of a major decline.

However, what is interesting is that free streaming is not growing by the same rate radio is declining. Instead, what is happening is that radio and streaming audiences are co-existing, with many that have spent a long time doing both eventually shifting all of their listening to streaming. Added to this, older consumers tend to embrace change more slowly than younger audiences. So, radio’s older listener base effectively acts as a disruption buffer.

What all this means is that radio is facing an existential threat like no other but it has some time to get its house in order, to identify how it can meld the best of the radio model with streaming experiences to start its fight back. And make no mistake, radio has so many unique assets that streaming does not (local content, talk, news, sports, weather, travel, brand personality etc.) and Apple’s underwhelming success with Beats 1 shows that hiring a bunch of radio people and launching a station does not guarantee success. Nonetheless, streaming services will get there. And Spotify’s recently launched Pandora-clone in Australia indicates just how serious the radio frontier is to streaming.

For more (a lot more!) data and analysis on how radio and streaming are facing up against each other, check out our new report Radio – Streaming’s Next Frontier: How Streaming Will Disrupt Radio Like It Did Retail which can be purchased directly from our report store here and is also available immediately to MIDiA clients as part of our research subscription service.