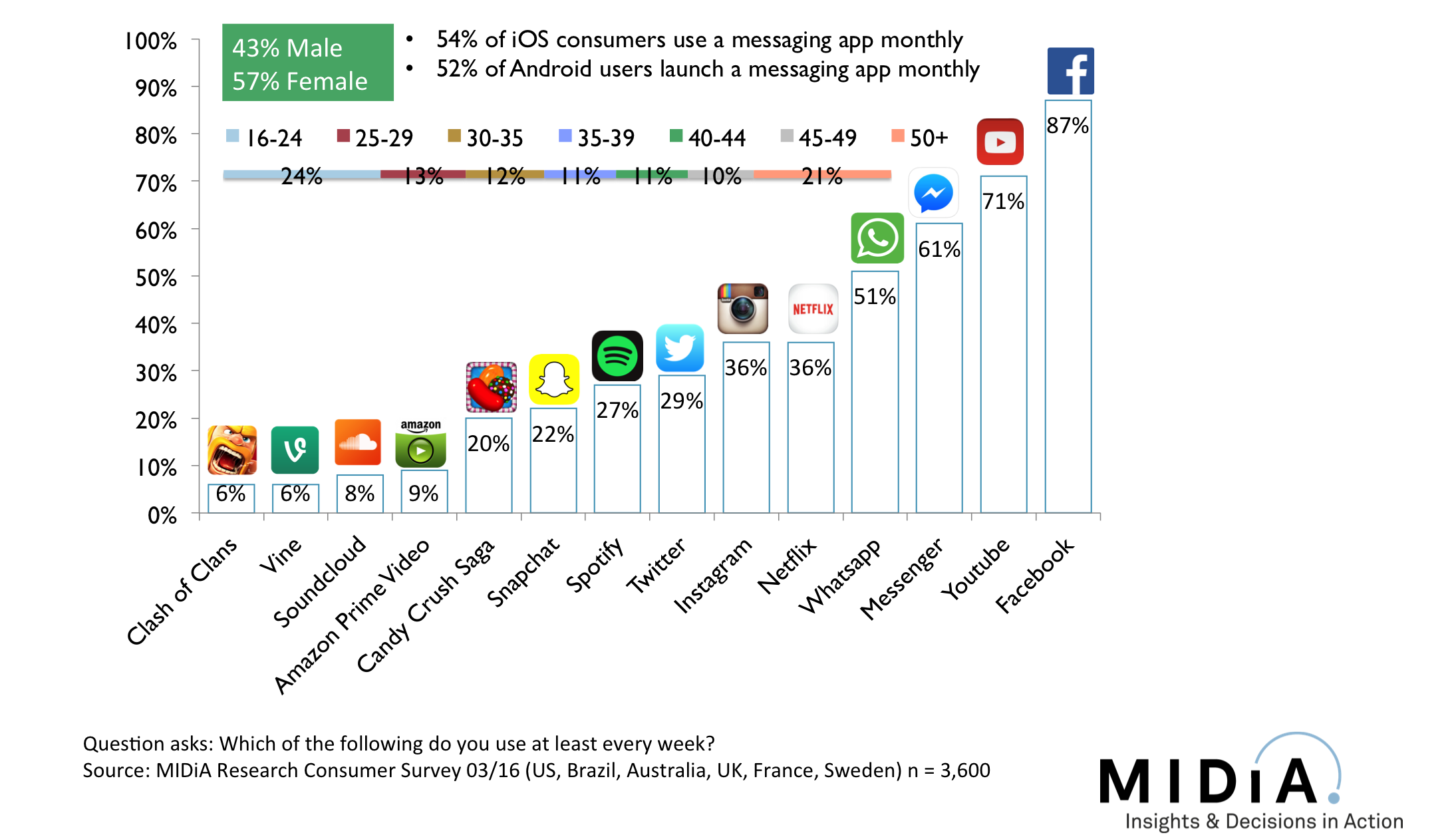 54% of iOS consumers and 52% of Android consumers now use messaging apps monthly, according to the multinational consumer survey from March 2016 conducted by MIDiA research.

Though its proof of popularity in the digital era is as old as the SMS, it was the OTT platforms, that realized and truly doubled down on the potential of mobile messaging. Adding multimedia functionalities, commerce services, bots -and above all- going ‘free’ resulted in a massive growth of OTT messaging platforms in recent years. There are now over 5 billion cumulative Monthly Active Mobile messaging users in the World. Due to the high consumer appeal and a number of acquisitions in the space, two major mobile messaging ecosystems have emerged. Simply put, it’s Facebook (including Messenger, Whatsapp and Instagram) in the West and Tencent (with WeChat and QQ) in the East. Both companies’ messaging ecosystems now boast well over 1.5 (Facebook over 2) billion cumulative Monthly Active Users. Putting things into perspective there are approximately 1 billion¹ active iOS devices and 1.4 billion Android² devices. And though it is still early days for certain mobile messaging experiences such as chat bots, it is indeed already appropriate to talk about mobile messaging as one of the future mainstream distributors of mobile experiences – next to the app stores and the mobile web.

31% of mobile messaging users are over 40 years old. Indeed the age distribution of mobile messenger users currently skews slightly younger than that of iOS and Android overall. However, mobile messaging has solid legs in all age segments. While it is most popular among 16-24 year olds, the distribution among the remaining age segments is nearly equal, illustrating its mainstream potential. In the future the distribution will become even more equal as digital natives continue to replace older generations amongst the smartphone owner community.

This upcoming MIDiA report will dive further into the nuanced characteristics and behaviors of mobile messaging users. Beside demographic analysis of the segment, it will examine app spend and app usage patterns of the segment as well as its video consumption behaviors. Furthermore it will highlight important commonalities and differences between the overall smartphone user segment and the mobile messaging user sub-segment. If you’d like to enquire about the report or ask us more about the Mobile Messaging user segment, drop us a line at info@midiaresearch.com