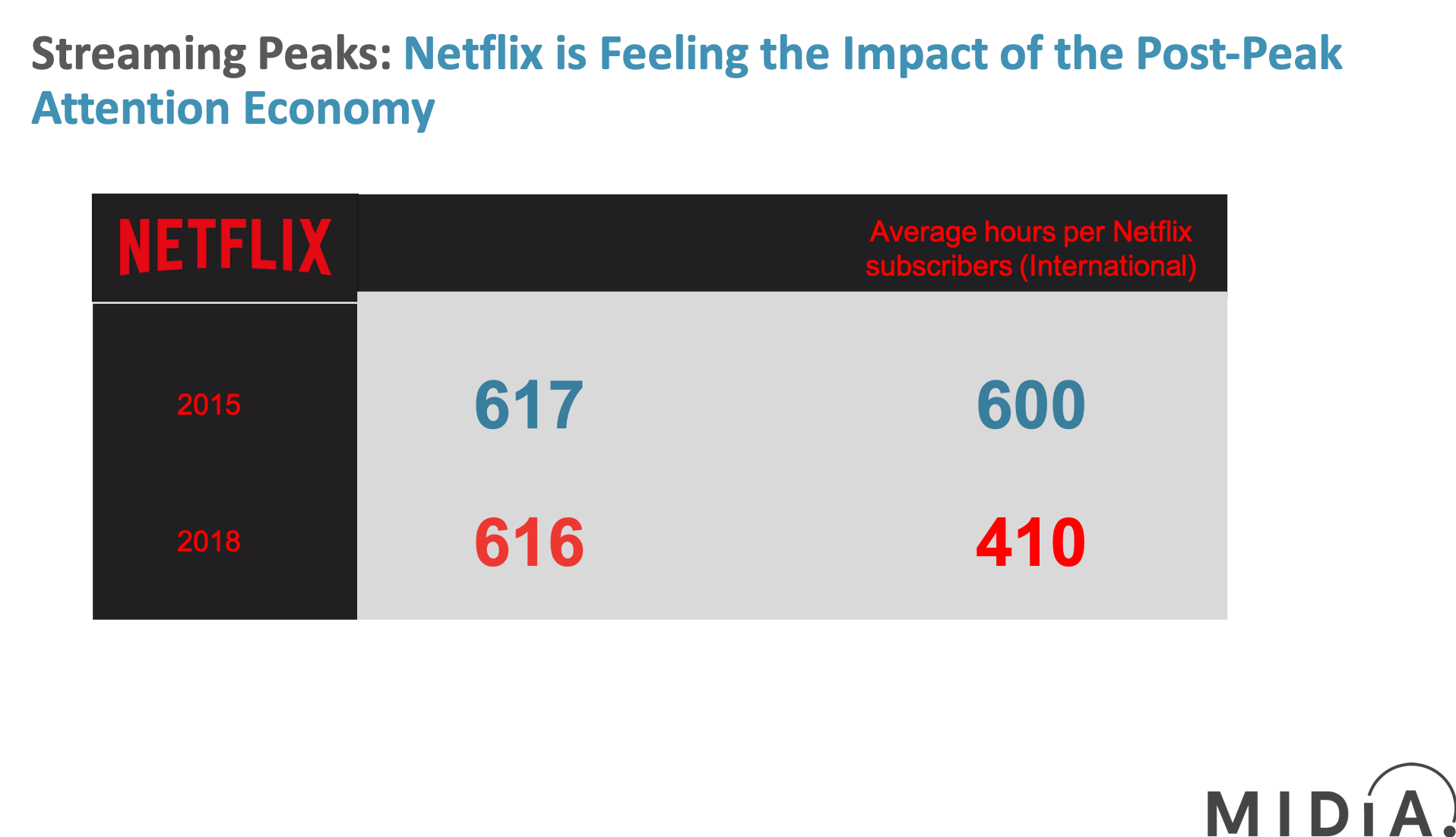 If a week is a long time in politics what must three years be in streaming video? In the case of Netflix, it turns out not a lot…in one key metric- domestic engagement. On other metrics Netflix has been surging ahead. On a subscriber basis the world’s largest subscription video on demand (SVOD) service has grown by 236%, from 31.7 million US domestic paying members in 2015 to 58.5 million at the end of 2018. Internationally the growth has been even more impressive, with Netflix growing its international paid subscriber base by 731% from 9.7 million in 2015 to 80.8 million at the end of 2018.

On the back of this combined 236% subscriber growth, revenues increased from $6.1 billion in 2015 to $15.4 billion, a 152% growth between full year 2015 to 2018. Operating margins also increased, from 1.8% in FY2015 to 7.7% in FY2018. However, income expense (the cost of servicing company debt issued to finance investment in content) has increased from 1.9% in FY2015 to 2.7% in FY2018. Over the same period Netflix’s overall content budget has increased by 84%. Despite all this increased content investment and growth in subscribers, one key metric has actually gone into reverse: time spent viewing content on Netflix:

The above data points are all modelled by MIDiA Research based upon publicly available information Netflix has shared around subscribers and daily viewing time on the service. By triangulating the data, a clear downward trend emerges in consumption. In the US annual viewing time has marginally decreased, reflecting the flat domestic weekly active use (WAU). For example in Q4 2016 MIDiA Research brand tracker data had WAU of Netflix in the US at 46%; in Q4 2018 WAU was at 47%. This is despite the significant increase in subscribers and the escalating investment in content. Domestically, Netflix is increasingly having to work harder to maintain the current level of engagement. It is running faster to stand still.

Internationally the situation is notably worse, with annual engagement significantly down by -32% in three years. With the domestic market saturated for Netflix, international growth has been key to Netflix’s message to investors since January 2016, when CEO Reed Hastings announced its pivot to international. He addressed the CES audience in 2016 that the service was available in 190 different territories. The significant decline is a direct consequence of Netflix launching in markets without a strong TV consumption heritage (the polar opposite to the US). This combined with the strong US focus of Netflix content and peaking attention in the developed markets where Netflix had launched pre-2016, has led to significant headwinds against increased per capita engagement for Netflix internationally.

Peak Attention—The Elephant in the Room for Video Streaming

Netflix is not alone as it faces the unrelenting forces of peak attention with its implications of a drift beyond the peak, as the gaming industry is currently experiencing. In the digital economy which is now largely driven by app engagement, and in the emerging markets which Netflix is now prioritising, the proliferation of available apps has now saturated available consumption. This means that a video app is now directly competing with a gaming app for the smartphone user’s finite attention span.

Netflix in 2019 therefore faces the unprecedented challenge of arresting engagement decline at the same time that its overall subscriber base and revenues continue to grow at an unprecedented rate. Welcome to subscription dynamics in the post-peak era…