Netflix Is Becoming More Efficient Than Spotify At Revenue Generation 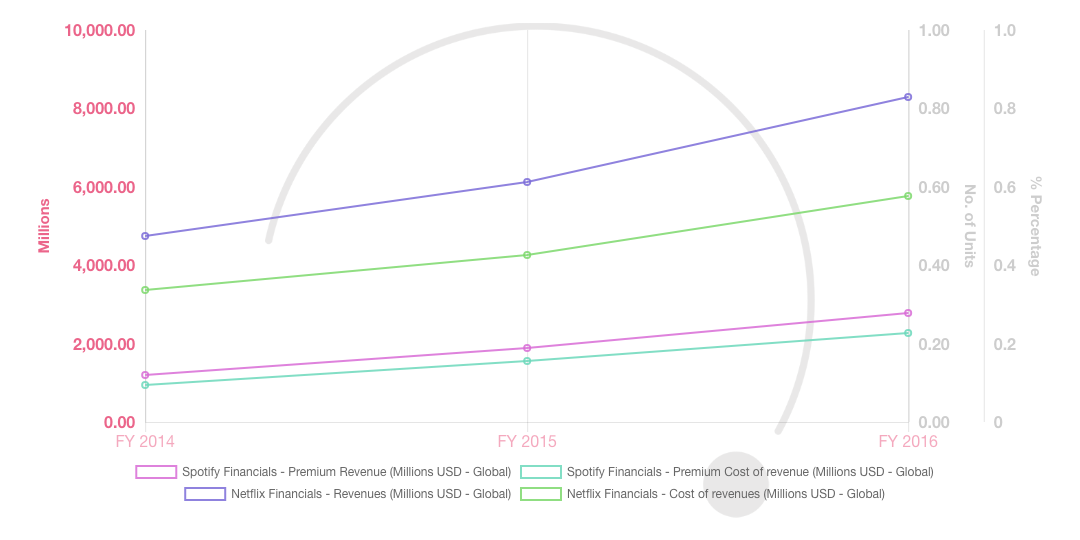 In the streaming wars, there are two standouts that grab all the attention and, in many ways, capture the popular zeitgeist around the transformative power of streaming. The two companies are Netflix and Spotify: both were early adopters of streaming technology as a business, to consumer distribution platform for media content. In 2007, the 10-year-old Netflix made the momentous strategic decision to prioritise video streaming over its DVD rental business. And in 2008, Spotify unleashed unlimited music streaming onto a music consumer base that had only recently come to terms with digital downloads as the default way to legally digitise their music consumption. Fast forward a decade later and Netflix and Spotify now define the digital direction of video and music respectively. Both companies dominate their respective streaming markets, with each holding a third of the global market share in video and music respectively. 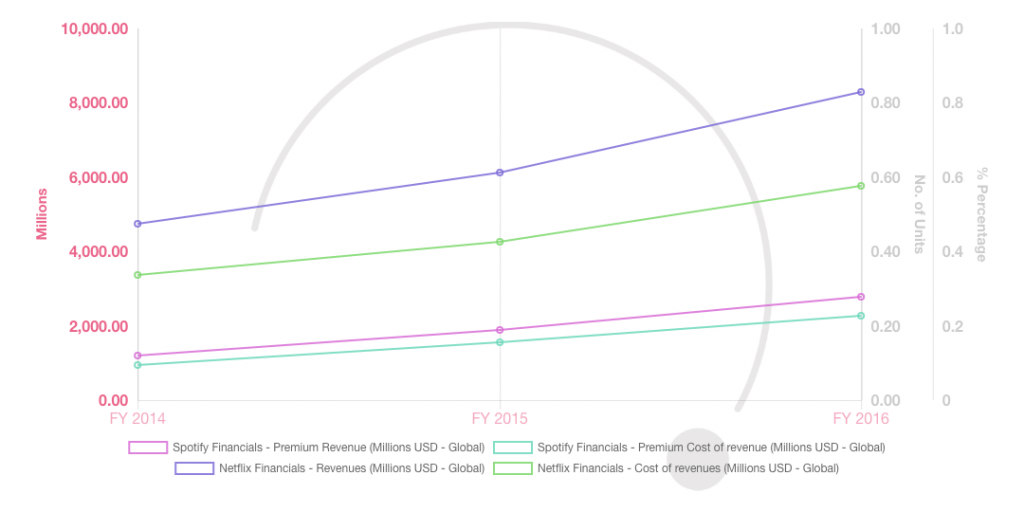 As the above chart created using MIDiA Fuse starkly demonstrates, revenues have increased significantly for both Netflix and Spotify Premium (Spotify’s paid subscriber revenue stream which is a direct like-for-like comparison with Netflix’s paid subscription model). Between 2014 and 2016, Netflix revenues nearly doubled from $4.7 billion in 2014, to $8.3 billion in 2016. Spotify’s revenues grew from $1.2 billion to $2.8 billion over the same period – an addition of $1.6 billion or an increase of 134%, compared to Netflix’s increase of 76%, equivalent to $3.6 billion. From a revenue growth perspective, Spotify is by far the leader out of the two dominant streaming services. However, Netflix has the edge on its music streaming peer in a crucial operational area – its operational margins.

Netflix’s cost of revenue grew from $3.8 billion in 2014 to $5.8 billion in 2016, an increase of $2.3 billion. This represents a 61% increase in its cost base. Over the same period, Spotify’s costs have increased from $0.9 billion to $2.3 billion – a $1.4 billion or a 156% increase in costs. Both companies are growing in revenue, but, in doing so, Spotify is decreasing its margins, while Netflix is increasing them.

Arguably, the first decade of streaming’s spectacular rise has been all about establishing the supremacy of streaming as the default distribution model for digital premium audio-visual media. The second decade will increasingly be about the ability of streaming services to translate their reach and control over digital audience engagement into reducing their largest single external cost of licensing, by bringing more content in-house. Netflix’s 2013 launch of its first scripted drama original House of Cards has given the SVOD service a four-year lead on Spotify, and the difference is now strikingly clear on the diverging margins being achieved by both increasingly popular and increasingly dominant services.