Is QQ Music Worth $10 Billion? 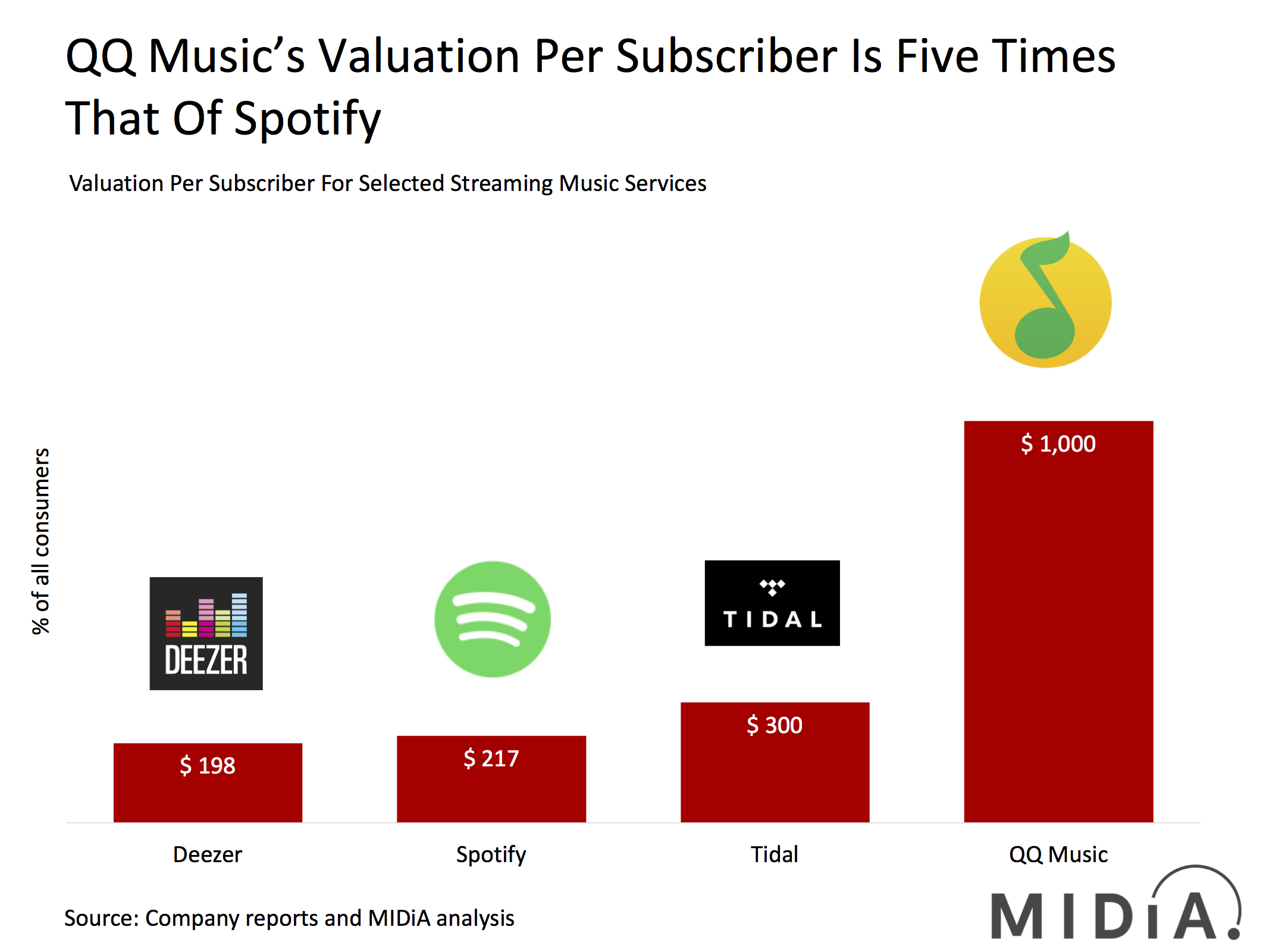 Western appetite for the Chinese market has long been based upon accessing the 1.4 billion consumers. This has in turn impacted valuations of Chinese companies, particularly when eager western investors are involved. However, there is a growing realisation that market potential does not always translate to performance. Now we have Chinese tech major Tencent seeking pre-IPO investment in its music streaming service QQ Music, against a valuation of $10 billion. That is only $3 billion less than Spotify’s valuation. So, is QQ Music worth $10 billion? Valuations in isolation can be misleading and therefore need context and scale. For example, Deezer had a valuation of $1.25 billion for its aborted IPO, while Spotify’s valuation is nearly 10 times higher. Moreover, Spotify’s subscriber count (60 million) is nearly 10 times higher than Deezer’s was (6.5 million), leading up to the aborted IPO. So, the best way to make meaningful comparisons between streaming music valuations is to look at the valuation divided by the number of subscribers, to give us a valuation per subscriber metric (see above). Here are a few ways to assess the value of QQ Music compared to other streaming services:

So, to answer the opening question, is QQ Music worth $10 billion? That depends. Compared to other streaming music services, the metrics suggest that it isn’t. But, to Tencent’s local investor market, maybe so. 80% of Chinese stock market transactions are from small retail investors, i.e. not institutional investors. So, while a $10 billion valuation might look high to institutional investors, to enthusiastic local retail investors who know QQ Music and have read all the stories about the booming streaming music market, this will appear to be a golden opportunity to get in on the great streaming boom.

Is QQ Music worth $10 billion? It depends on who you are.

Hessel
13 Sep 2017
Hi Mark, Thanks for the different comparisons. What struck me is your reply: "Until we hear consolidated numbers".. How does that work in China? I did a bit of research and found out that similar to Alibaba (facilitating 250+ subsidiaries) also Tencent Music Entertainment Group has its HQ on the Cayman Islands. Probably not for transparency reasons. Remember your blog about the advanced label streaming payments? Midia Research reported these advances were "158% of the $91 million that digital music revenue grew by in Q2 2016. Advanced streaming payments accounted for all of the digital music growth, and more." Circling back to how to valuate QQ: can we ever really know? Easy way to look at this: if investors pay the price than there is your answer. The major record labels have signed an exclusive deal with Tencent. Tencent (according to the Financial Times yesterday: https://www.ft.com/content/d998fdb0-ede4-3764-9f4b-c2e38208fd23) is going to use that deal to supply Alibaba with music, that must be worth something as well. Is this part of your valuation? In my basic research I could not find any transparent indicators that can be used for a proper valuation. So I am really keen to hear more about a validated consolidation. Possible?
Mark Mulligan
13 Sep 2017
It's not a glaring mistake. The focus here is on QQ Music. Those 2 services are run as separate brands and entities within the same corporate group as QQ Music. Until we hear consolidated numbers reported for those 3 services (i.e. removing the large overlap / duplication in audience) we cannot state 15 million subs as an an overall number for QQ. Indeed, the combined free user base (adding all 3 services together) would be more than the entire population of China.
Mark Mulligan
13 Sep 2017
Given that China is likely to be a launch market for Spotify, Tencent's pool is smaller. i.e. Spotify already has a global brand and could emulate Apple's solid success in China due to its global brand. So can carve out a share of the Chinese market more easily than Tencent can of the ex-China market
Eric de Fontenay
13 Sep 2017
Interesting article except for the glaring mistake that Tencent Music Entertainment Group owns 3 services (QQMusic, Kugo, Kuwol) that together account for over 70% of streaming market (big omission)... Tencent as a whole has reported 15 million subscribers
Kyja
11 Sep 2017
Hi Mark, thanks for the analysis. Tencent announced at MIDEM that they had reached 15 million paid users across their 3 music streaming brands, as well as 600 MAU on the free tier. https://blog.midem.com/2017/06/midem-day-two-wrap-andy-ng/ Judging "on potential", that's a multiple-times larger pool of users left to convert than Spotify.
No thanks