Recorded music has always evolved to fit the dominant format of the era, from three-minute songs to fit on 7-inch vinyl, through eight-song albums to fit on LPs, through to 16+ song albums to fill CDs. Format-driven change is nothing new, but streaming’s impact on the making of music itself is arguably more revolutionary than that of previous formats because it is both the consumption and discovery format rolled into one.

In the heyday of the album, the focus would be both on what makes a great album and what tracks would work on radio, and later MTV. Now all the considerations are rolled into the song itself, the central currency of the streaming era. 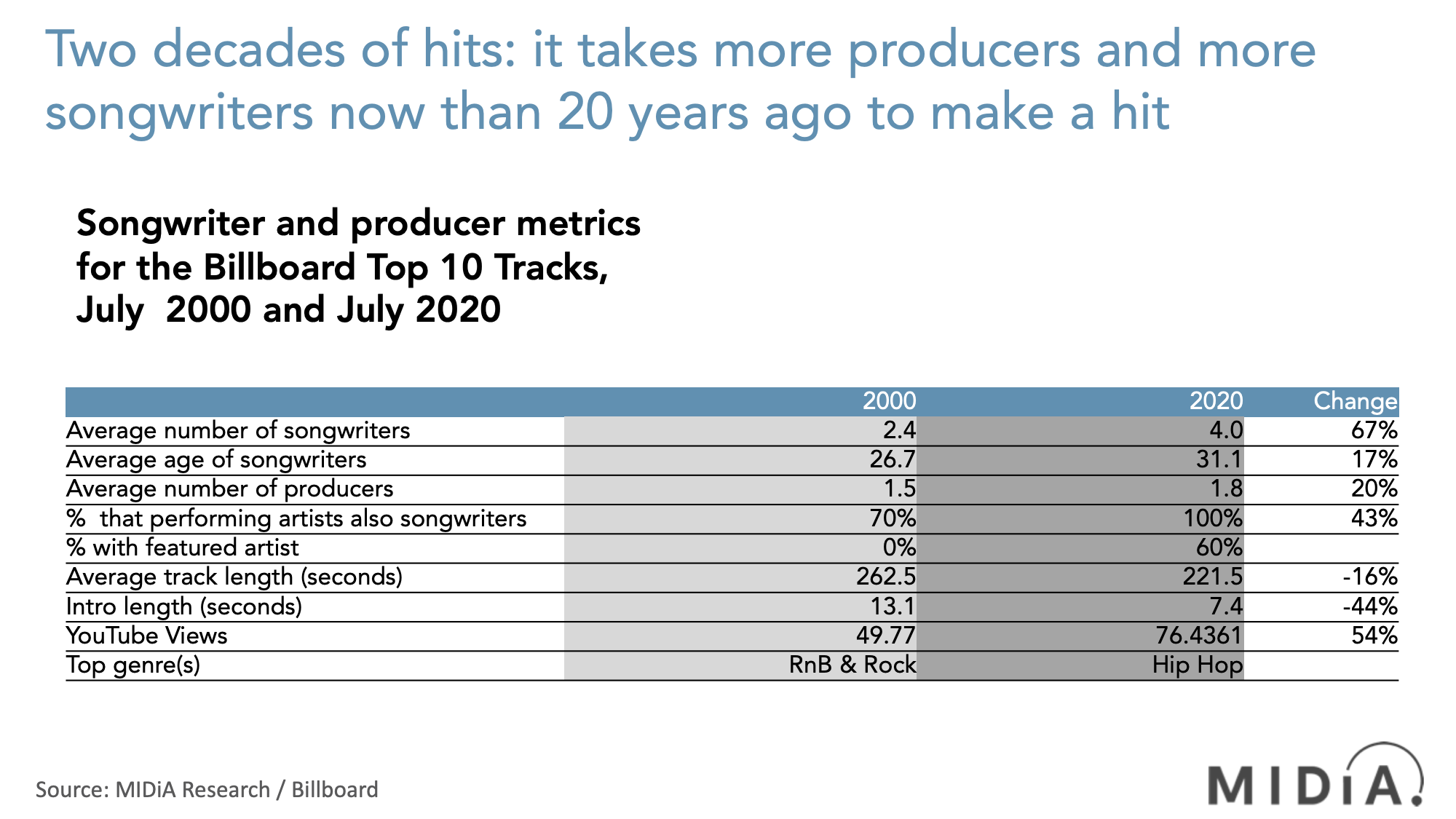 To illustrate just how significant this change is, we have taken a snapshot of the Billboard Top 10, now and 20 years ago. The caveats here are that this is just that: a snapshot in time, rather than a comprehensive data analysis – and it is a view of just the very top of the pile, the megahits of the day. Nonetheless, it provides some clear illustration of how the DNA of a hit has changed over the course of 20 years:

·      Shorter, snappier songs: The average length of the top 10 hits has fallen by 16% to 221.5 seconds (three minutes and 42 seconds, down from four minutes and 22 seconds). Meanwhile, intros have fallen from 13.1 seconds to 7.4 seconds. In the streaming economy where release schedules are weaponised with increased volume and velocity of releases, there is often just one chance to catch the attention of the listener. With ever fewer younger music fans listening to radio, there is little opportunity for the listener to hear the track again if they skip it in their streaming playlist.

·      Hip Hop’s apogee: The July 2000 top 10 was evenly split between pop, rock and RnB, with the latter two having the edge. In today’s top 10 Hip Hop reigns supreme, accounting for six of the top 10 tracks. Starting with the rise of EDM and now continued with Hip Hop, the hits business has become more focused, doubling down on one leading genre and in turn making it even more dominant.

·      The industrialisation of songwriting: As the buy side of the song equation, record labels are reshaping songwriting by pulling together teams of songwriters to create genetically modified hits. The more top-class songwriters, so the logic goes, the greater the chance of a hit. The average number of songwriters increased from 2.4 per track in 2000 to 4 in 2020. The upside for songwriters is more work, the downside is having to share already small streaming royalties with a larger number of people. Interestingly, the average age of songwriters increased from just under 27 to just over 31. It points to longer careers for songwriters but it does beg the question whether this means songwriters’ life experiences are that little bit more distant from those of young music fans.

·      The rise of the featured artist: Adding super star collaborators onto tracks has become a go-to strategy for streaming-era hits. In the July 2000 top 10, none of the tracks had a featured artist, by July 2020 that share had jumped to 60%.

The dominant theme underpinning these changes in the DNA of hits is reducing risk. More songwriters, more collaborations, shorter songs, shorter intros, fewer genres all point to honing a formula, following a blueprint for success. This evolution will continue to gather pace until the next format shift rewrites the rules. Until then, record labels, songwriters and artists need to ask themselves whether they are striking the right balance between business and creativity. If they are not getting it right, then the inevitability is that (at the hit end of the market) pop will eat itself. And if it does, expect an audience shift away from the increasingly homogenised head, down to the more diverse tail

by Keith Jopling
22 Jun 2020
In ‘ The Song Economy is just getting started ’ I looked at how major catalogue songs such as Journey’s Don’t Stop Believin’, Toto’s Africa and Mariah Carey’s All I Want For Christmas Is…