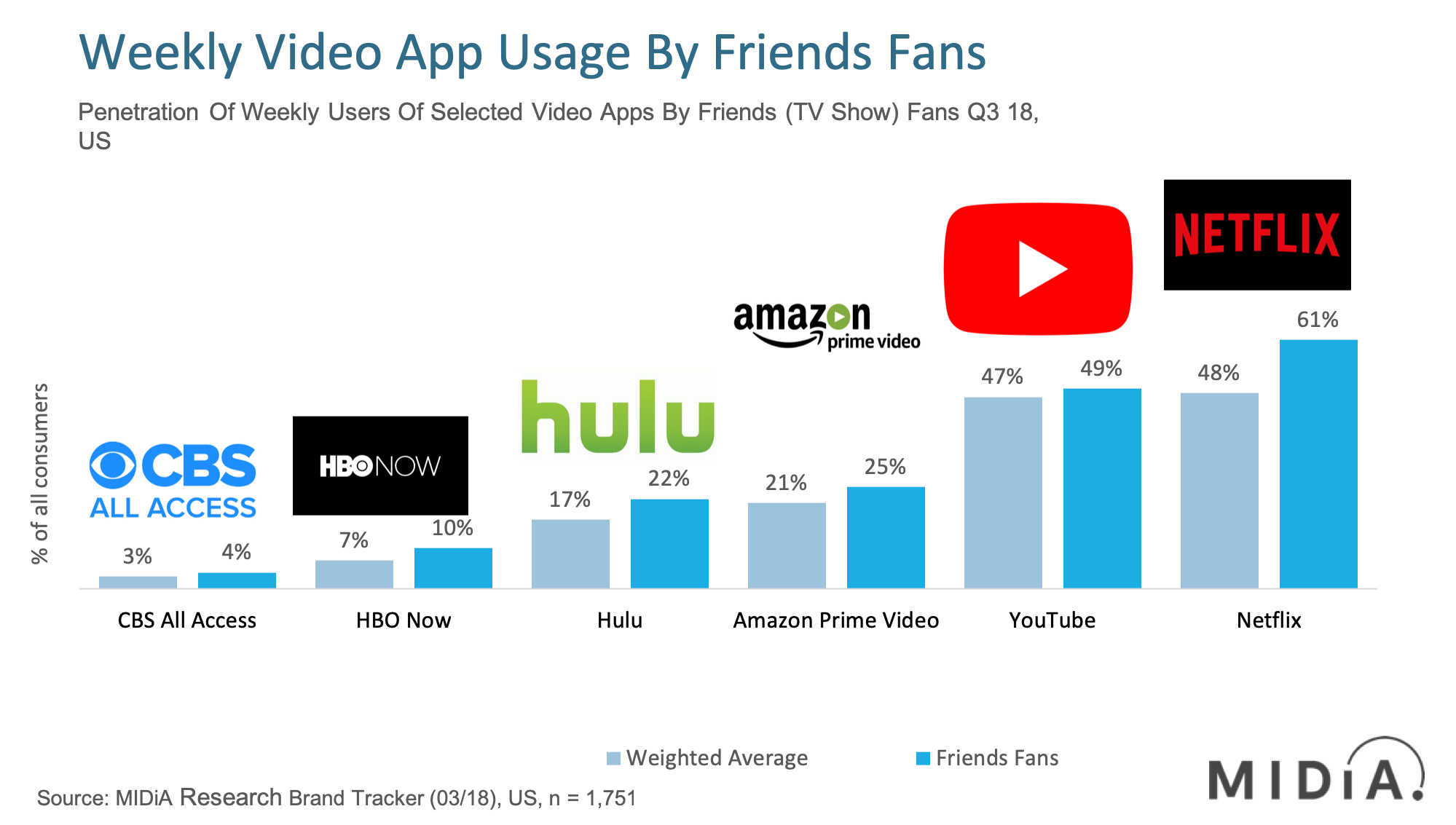 The revelation that Warner Media (previously Time Warner, and acquired by AT&T in June 2018) has negotiated a clause in its 2019 licensing agreement with Netflix for ageing sitcom Friends highlights the existential challenge facing TV players in the streaming era. Under the terms of the 2019 agreement Netflix will pay Warner Media $80 million for the rights to continue stream Friends globally in 2019. However, the exclusive rights have now been modified by two clauses; the first of which allows Warner Media’s new direct-to-consumer service launching in Q4 2019, the right to also stream Friends from 2020. If this happens the amount owed by Netflix under the deal will decline by 25% per year. Secondly, Warner Media now has the option to cancel the deal if it decides to become the exclusive streaming destination for Friends.

For a show that produced its last series 14 years ago, Friends clearly still has the ability to drive engagement with audiences in a way which the 700 original shows and films being produced by Netflix in 2018 can only dream about. This partially explains the license fee hike from the 2014 original Time Warner Netflix deal, where the streaming video on demand (SVOD) giant agreed to pay $120 million for a four-year exclusive deal for Friends. In that time period, market value for the streaming rights of the show increased by 260% as US SVOD competitor, Hulu, and soon to be video streaming competitor, Apple, expressed interest in acquiring the streaming rights after they expire in January 2019.

As the above data from MIDiA Research Q3 2018 Brand Tracker Data highlights, in the US Friends fans over index on all the leading video streaming services for weekly active use (WAU). The majority of Friends fans, perhaps not unsurprisingly, use Netflix on a weekly basis, but the fact that they over index for the over major SVOD services and the leading ad-supported video on demand (AVOD) service, underlines why Netflix is over paying to retain the show and why Warner Media is so keen to explore optionality for adding the title to its forthcoming direct-to-consumer proposition.

Warner Media has now formalised its own scared cows dilemma

The frenemy deal agreed between Warner Media and Netflix underlines just how quickly the traditional media powerhouse has found itself in a classic business sacred cows dilemma. Essential change can only occur by repurposing assets that have traditionally been the most valuable parts of the business to date. For Warner Media, this means potentially taking the significant short-term hit in licensing fees (the existing deal with Netflix) to invest in providing exclusive content to beef up its own SVOD service (pulling the Netflix Friends deal entirely). The middle ground of sharing streaming exclusivity with Netflix (the 25% discount) is likely to disadvantage Warner Media more than Netflix because there is already a causal connection in the mind of the digital consumer between streaming Friends and viewing it on Netflix. This why Netflix is still prepared to pay 200% above its previous deal to retain Friends on a non-exclusive basis.