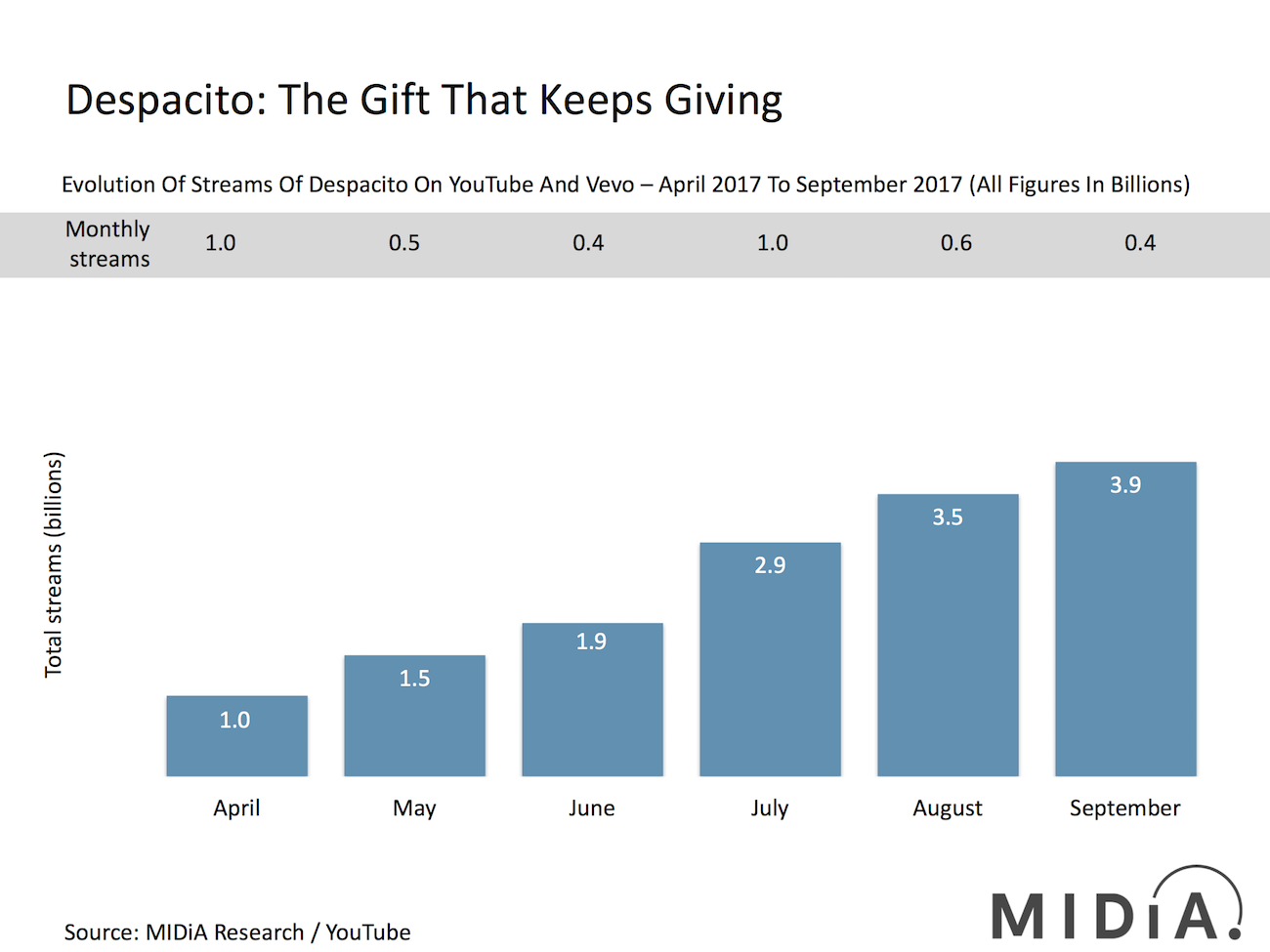 ­­In January Despacito became the second fastest music video in YouTube history to hit one billion views, taking just 97 days to do so. Now it is on track to hit four billion. In January Despacito was part of a succession of new music video consumption records that YouTube and Vevo are setting. YouTube music video views are on the rise, dramatically so, driven both by more users (YouTube announced 1.5 billion signed in active users) and deeper engagement. This is YouTube’s music renaissance and the record labels (their marketing divisions at least) are loving the increased exposure their artists are receiving. At first glance this might not appear to make much sense, given that: a) video streaming growth is outpaced by audio streaming in key markets such as the US and UK, and b) that the whole value gap-grab debate is as far from a resolution as it has ever been. Then, along comes Despacito to drive yet another bulldozer through everything, breaking all the rules again.

The days of one billion streams being considered exceptional are fast disappearing. Despacito added one billion streams in July alone. Just as Spotify spent 2015 and 2016 continually rewriting the rules each quarter, now YouTube is doing the same in 2017. Spotify, of course, is also having a spectacular year but it has established a steadier pace of change, especially in developed markets. Spotify is the new normal (until it’s not again). YouTube had its 'normal' but now the acceleration of usage, particularly from Latin America, is making the previously accepted reference points irrelevant.

Moreover, Latin American driven streams might actually intensify the value gap-grab debate. In 2016 YouTube delivered a monthly average revenue per user (ARPU) of $0.07 to the labels. In contrast, Spotify delivered a monthly ad supported user ARPU of $0.34. On paper YouTube has a lot of ground to make up, but things are a little more complex than that. YouTube pays out a share of ad revenue to rights holders. So, if revenues go down the amount it pays goes down by the same rate. Spotify (at risk of simplifying excessively) pays out on a per stream basis. So, if revenues go down, Spotify still pays a certain amount.

This is where Latin America comes in. The local video advertising markets throughout Latin America are much less developed than in the US and, additionally, there is much less advertiser demand. Compared to the US, there are fewer advertisers with less money to spend on consumers, who also spend less money. This means that advertiser demand massively outstrips supply, which suggests that ad prices are lower. So, as Latin American YouTube music consumption grows, effective per stream rates will decline. In our MIDiA’s 2017 Predictions Report, 2016, we predicted that this would happen.

“In 2017, audience behaviour will continue to grow faster than advertiser budgets, meaning that CPMs (and in the case of YouTube, effective per stream rates for music) will fall.”

YouTube and the music industry are unlikely to truly see eye to eye, but value gap or no value gap, we are now at a decision point. The accelerating role of Latin America and other emerging markets in YouTube consumption will see more and more records broken, with bigger and bigger hits made, but the gap between consumption and revenue will widen. So the music industry needs to decide what it really wants YouTube to be for the next few years: promotion or revenue. Trying to make it do both well will most likely result in YouTube doing neither of them properly.