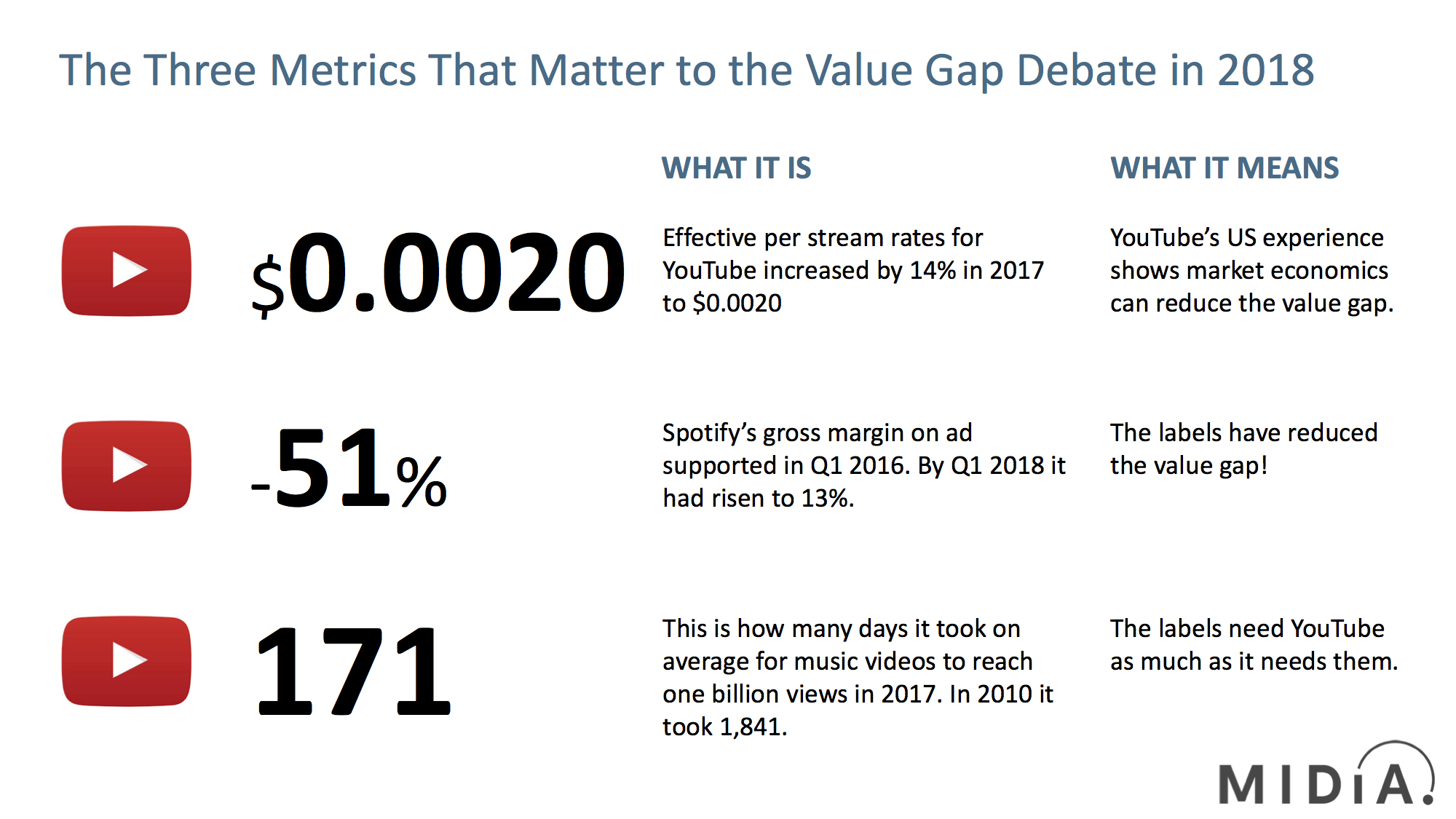 It was a day of two halves for YouTube. On one side a big press release went out championing a host of impressive new stats – including hitting 1.9 billion logged in users, following an official launch of YouTube Music the day before. Meanwhile, on the other side, the European parliament’s legal affairs committee voted in support of Article 13, which will overturn some basic premises of the fair use / safe harbour frameworks under which YouTube operates. The question is which half will prove to be most impactful on YouTube’s music strategy.

If YouTube was to post the status of its relationship with the labels on its Facebook profile it would be ‘It’s complicated’. The whole value gap argument – which posits that YouTube does not pay as much as other streaming services because it does not have to directly license in the way they do – has created a war of words characterised by obfuscation and disinformation on both sides. Its super-recent new premium strategy was almost certainly timed to coincide with this vote and it helps present YouTube as a premium player, doing what the labels want.

But fundamentally, Google and its YouTube subsidiary are all about selling advertising. If you put too many of your most valuable customers behind an ad-free pay wall, advertisers will eventually stop paying as much for ads. Google is not about to kill off a large scale, high-margin business for a small scale, low margin one. In short, Google cannot afford for music subscriptions to be too successful. The three numbers that matter

The EU vote will likely get pushed to a full parliamentary vote, so the legislative picture is still far from resolved. When determining the outcome, policy makers, YouTube and rights holders should consider three metrics: $0.0020, -51% and 171:

Commercial sustainability is the core issue

At the heart of the value gap argument is a fight for control. Rights holders want more control over YouTube to extract better deals and YouTube does not want to cede that control. But there is an argument that YouTube’s greater control enabled it to build a commercial sustainable model. Spotify, which does not have YouTube’s negotiating power, is still not generating a net profit on streaming. On a sliding scale, there are label-defined rates with a non-commercially sustainable business model at one end, while at the other end there is YouTube, which does not pay rights holders what they want, but has a commercially sustainable model. The solution clearly lies somewhere between the two extremes. Moreover, what is crucial, if YouTube is going to remain incentivised to continue to make music videos a success, is that rights payment need to be a share of revenue, not based on a minimum per track fee.

Spotify is, for now at least, all about music, so it has to make it work. YouTube is not. If music suddenly becomes lower margin for YouTube with fixed per stream costs, then it would be commercially foolish for YouTube to do anything other than push its viewers to other forms of content than music. That 171-day metric didn’t happen on its own. YouTube honed its algorithms to ensure it can make hits faster for the music industry, but it can dial that back in an instant.

There is even a possibility that paying more for music rights could scupper YouTube’s entire business model as other types of rights holders might start demanding better rates too. The crux of the matter is that the current economics suit YouTube but not rights holders. What we have to be careful to avoid is a new paradigm where roles are reversed. As important as music is to YouTube, Google could walk away if it really wanted to. Rights holders—labels especially, need to think whether that is a price they are willing to pay.