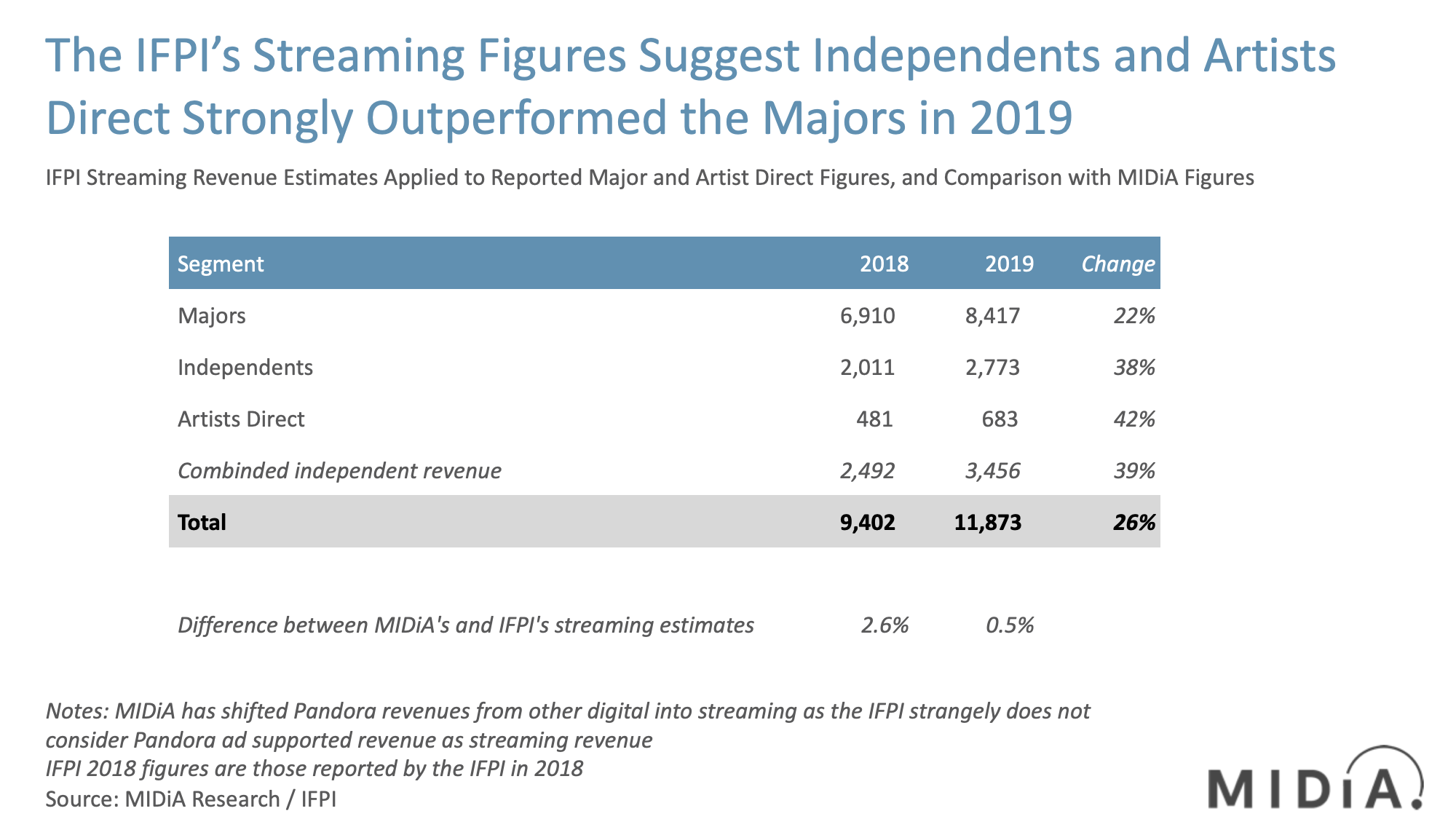 UPDATE: this post has been updated to correct an erroneous data point. Previously it stated that independent market share was 41%. It has been corrected to 29%

Recently I wrote about how a little-known Spotify statistic revealed that independents (labels and artists) outperformed the majors on its platform in 2019. The IFPI’s latest global revenue estimates provide further evidence of 2019 being a stellar streaming year for independents. As we have two sets of fixed reported figures (major label reports, and the artists direct sector reported by MIDiA) we can simply deduct these figures from the IFPI’s streaming figures to reveal what the IFPI estimates independent label revenues to be. The tl;dr: Independents grew by 39% while majors grew by 22%, which means that the independents’ global share of streaming revenue increased by two whole points from 27% to 29%.

The IFPI reported global streaming revenues of $11.2 billion, however these figures include YouTube but not Pandora ad supported revenues. So, to match up the IFPI’s definition with how the record labels report the revenue we need to add in Pandora ad revenue which takes us to $11.9 billion which is almost exactly what MIDiA reported two months ago.

Although independent labels and artists grew fastest in relative terms in 2019, the majors grew most in absolute terms, adding nearly twice as much net new revenue ($1.5 billion compared to $0.8 billion). The majors remain the powerhouse of the streaming economy but independents are rapidly making this space their own. If they were to add another four or five points of share across 2020 and in 2021, then independents would be represent a third of the entire streaming market. But a crucial consideration is that these figures are on a distribution basis, so the major revenue includes independents they distribute. According to the last WIN study, the independent market share went up another c12%. On that basis, by 2021, the independent label share of streaming could be approaching 50%. That would be a genuine paradigm shift, the clear announcement of a newly aligned music business.

Soon we’ll be writing on how the majors can turn this around. Watch this space.

by Tim Mulligan
7 May 2020
There was no dressing it up. Disney had a bad start to the year from a financial perspective. In its Q2 2020 (calendar Q1 2020) report the company announced an 85% decline in income from its continuing...

by Mark Mulligan
28 Apr 2020
Tomorrow (Wednesday 29 th April) Spotify announces its Q1 2020 results, at which point we will find out whether it had a COVID-bounce like Netflix did ( adding 15.8 million subscribers in Q1 ) or whether...