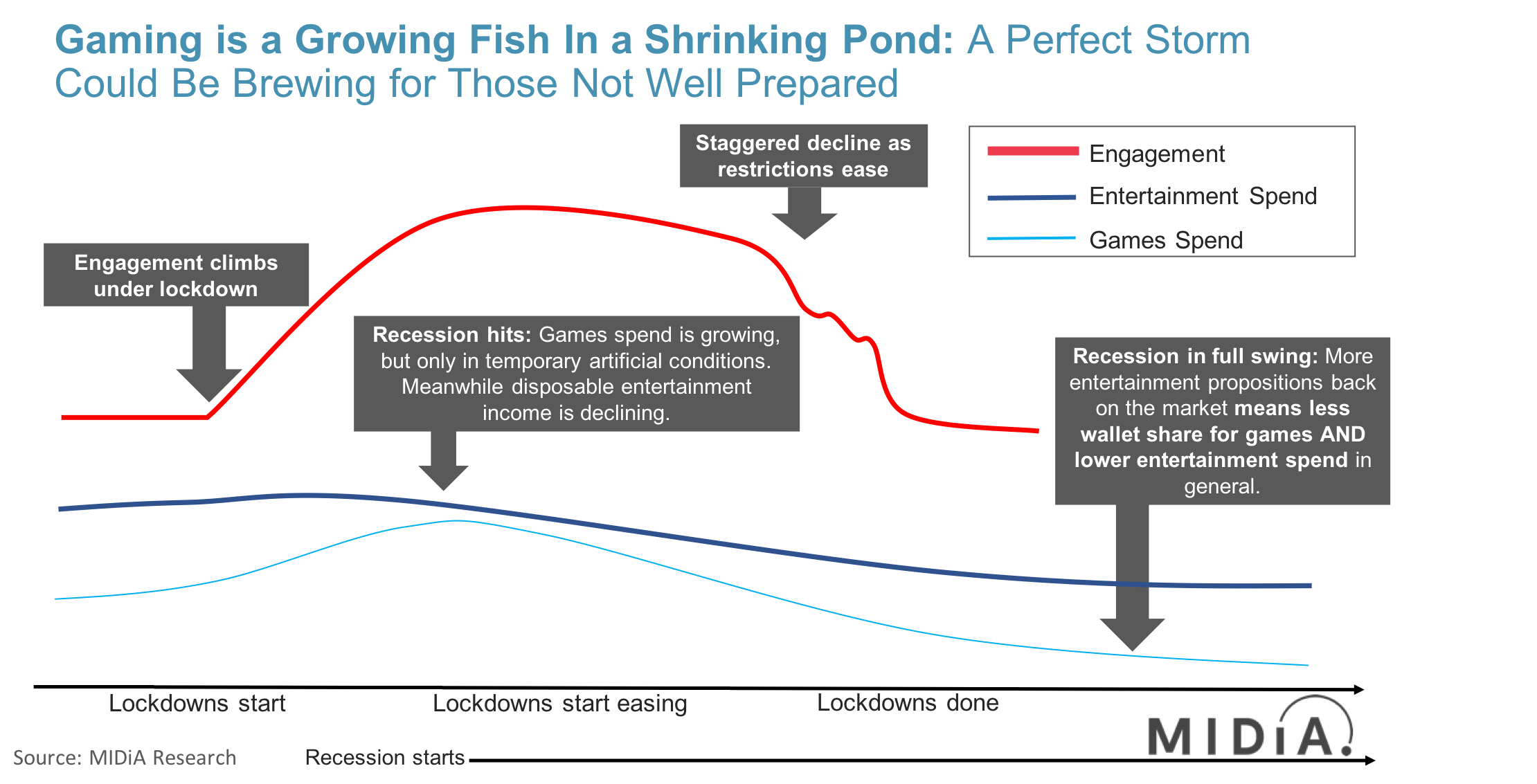 Compared to most, the games industry has benefited from the Covid-19 outbreak and related lockdowns. For a lot of games companies, engagement has increased and so have revenues, albeit just partially. Looking at the wider landscape suggests this will be a temporary dynamic which can cloud the view of where the market is truly going. Games companies need to be careful not to overreact to the immediate, while risking lack of focus on what lies ahead.

The oncoming recession will have wider implications across all sectors,  but will hit various industries at various times. By the time it materialises in games revenues and truly sends signals of caution to the games industry, the engagement spike could well be on its decline. To make things worse, user acquisition costs may be high, due to the previous engagement spike. The triple whammy of having to chase users in a declining engagement environment, while disposable income is low, and UA costs high, could cause complications for games companies in the mid to long term – especially those which overstretched/spent during the initial ‘covid-19 bounce’.

Companies should be actively planning to avoid this scenario. However tempting, the primary objective should not be sending everything into overdrive to squeeze every last cent of short-term profit from the current situation. Instead, the temporary surplus (be it in engagement or revenues) should be harnessed to pave the way for what lies ahead.

Lockdowns caused significant spikes in games engagement. 21% of US consumers, 13% of UK consumers and 26% of consumers in Italy reported spending more time playing online games in March. This, alongside lockdowns channelling entertainment spend in games favour gives the industry a sense of confidence. In reality however, this could be short lived:

Entertainment expenditure decreases, but games don’t feel the effect yet: As lockdowns start having a serious financial impact on consumers, their disposable income for entertainment spend decreases. However, this is not yet felt by the digital industry (and games in particular), because a significant part of entertainment is temporarily interrupted, so the budgets simply shift towards digital. Temporarily.

Lock down easing and recession:As the recession hits and lockdowns start easing, games spend will face the double whammy of declining disposable income, and the return of out-of-home entertainment propositions competing for wallet share.

Ultimately, in theory, when lockdowns end, and the volatility in entertainment wallet shares calms down, games spend should return to a similar share of entertainment spend as before the crisis. However, the recession driven decline of disposable income as a whole will likely mean that ‘the new normal’ is less than ‘the old normal’ in absolute terms, even for games.

Right now, games companies should be doing what they can to ensure that existing users are being super-served to build loyalty and long-term customer relationships, for when the weather worsens. This is arguably more important than hunting new users at the moment. To continue with the weather analogy – if there’s a storm coming, you would want to focus on strengthening and preserving your existing straw house, rather than spending your money on building a straw extension.

The impact of COVID on sports is explored in more detail in MIDiA’s recent report, COVID-19 and the Vulnerability of Pureplay Sports Streaming Services, now available to our clients. For access, please enquire at stephen@midiaresearch.com.

Recovery Economics | Bounce Forward not Back

by Mark Mulligan
28 May 2020
COVID-19 social distancing measures caused unprecedented dislocation to the entertainment economy. With a recession now a question of ‘how bad’ rather than ‘if’, entertainment companies have to…
No thanks