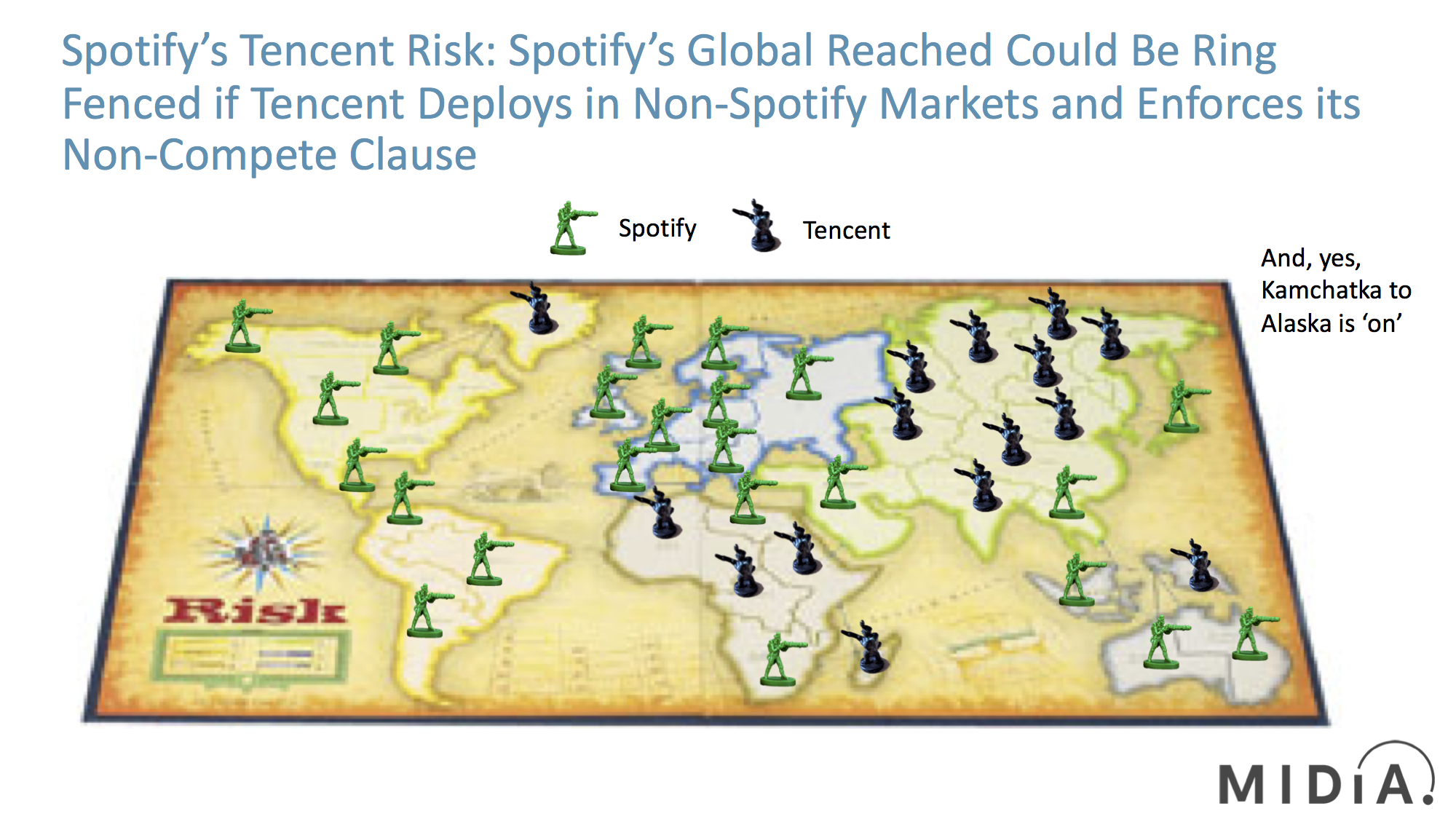 NOTE: a previous version of this post referred to a non-compete clause with Spotify detailed in this SEC filing. I have been advised that the scope of this clause is narrower than I had originally interpreted. I have therefore updated this post to remove reference to that clause but the essence of the post remains intact due to the potential role of the major labels which, as outlined below, could have the same effect as a non-compete clause.

On Thursday (September 20th) Spotify grabbed the headlines with its announcement that it is launching a free-to-use direct upload service for artists. While it is undoubtedly a big move, and one that will concern Soundcloud among others, it was not a surprising move. In fact, in April we predicted this would happen soon:

“Spotify will take a subtler path to ‘doing a Netflix’, first by ‘doing a Soundcloud’, i.e. becoming a direct platform for artists and then switching on monetisation”.

Will labels be concerned, sure, because although Spotify might not be parking its tanks on their lawn yet, it is certainly slowly reversing them in that general direction. However, they may just have a way of clipping Spotify’s wings and waiting in, er, the wings…Tencent.

Tencent is prepping its music division (TME) for a partial US IPO but announced earlier this week that it will be reducing the amount it is seeking to raise from $4 billion to $2 billion, though still against a reported valuation of around $25 billion. Regular readers will know I have a healthy scepticism of Tencent’s music numbers. It has only ever reported one subscriber number officially – 4.7 million for QQ Music in Q1 2016, therefore it has plausible deniability over all the non-official numbers it puts out via the press. So, the fact there still isn’t an F1 filing revealing TME’s metrics is intriguing to say the least.

The likelihood is that the numbers will show a relative flattening in music subscriber growth (though other areas of its business should be robust). If so, they fit a wider narrative of Tencent nearing the limits of its potential in China. Video subs, which have grown superfast, will soon slow, messaging is saturated and the Chinese government is curtailing Tencent’s games operations. The title of our April report says it all: “Tencent Has Outgrown China: Now Comes the Next Phase of Growth”. Until last year’s change in Chinese regulations, Tencent could quite happily have spent its time strolling across the globe buying up companies to spread its global wings. But now, operating under limits of how much it can spend on overseas companies, Tencent is restricted to taking minority stakes in companies like Gaana and Spotify. But those efforts do not deliver Tencent the scale of global growth it needs. You can probably see where this is heading: to grow its music business TME will have to roll out internationally, which is quite possibly part of the story it will use to justify its $25 billion valuation.

Should TME decide to use the $2 billion it raises via IPO as a war chest, it could then go on a global roll out to all the markets where Spotify is currently not present. Getting their first, with the backing of Tencent and of the $2bn IPO windfall would put Spotify on the back foot. Especially if, and here's the crucial part, the major record labels took this as an opportunity to knock Spotify down a peg because of its increasingly competitive behaviour. They've been relying on Indian licenses already, that could prove to be a template, with Tencent the grateful beneficiary.  This would have the effect of ring-fencing Spotify’s global roll out plans. For fans of the board game Risk, the board would look something like this:

But Risk’s map doesn’t really do it justice. Using a political global map, the respective footprints would look more like this: The major labels have proven unwilling to license Spotify for India because they weren’t happy with Spotify offering direct deals for a small number of artists. Imagine how they are going to feel with this latest move. With TME waiting patiently on the side lines, they may just see it as an opportunity to carve up the global streaming landscape into two halves, creating a cold war stalemate. Your move Spotify.