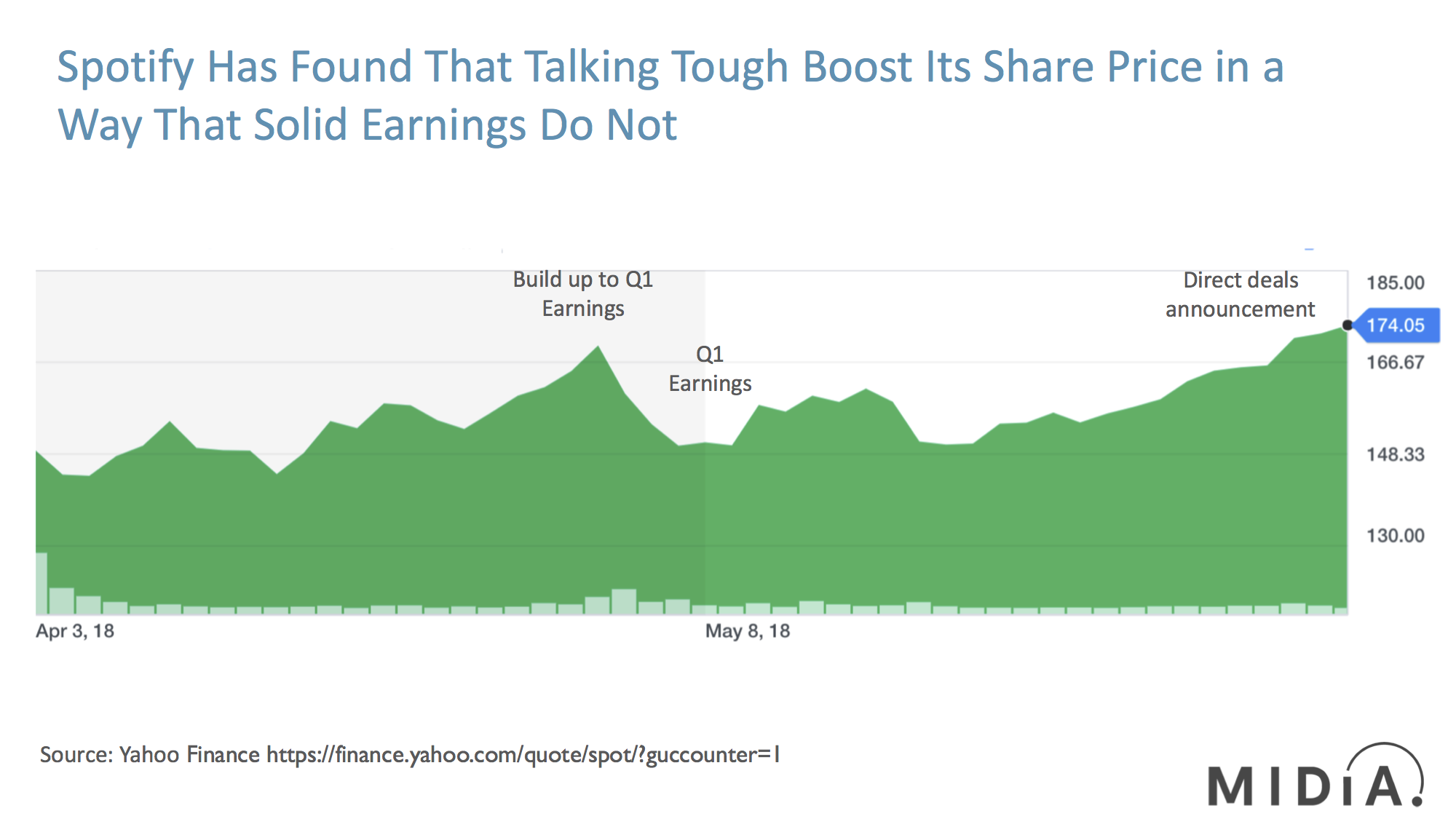 It is easy to feel that the pervasive obsession with Spotify overplays its importance to the recorded music industry. On the one hand it may only represent 27% of global recorded music revenues, but this compares to a peak of around 10% that Apple enjoyed at the peak of the iTunes Music Store. So, whatever label concerns existed back then about market influence – and there were plenty – their apprehensions have now multiplied. The assumption among many investors and label executives is that Spotify’s market share will lessen as the market grows. However, Spotify has thus far held onto its subscriber market share as the market has grown and looks set to do so in the foreseeable future.

If revenue is Spotify’s ‘hard power’ its real influence comes in its ‘soft power’. This takes two key forms:

A rabbit out of the hat

When Spotify reported its Q1 earnings, the music industry consensus was a job well done. It delivered nearly on-target revenues (though they were down slightly on Q4), solid subscriber growth, improved margins and reduced churn. But it wasn’t enough for Wall Street. Spotify’s stock price fell to $150.07 down from a high of $170 in the days building up to the earnings. So what went wrong? Investors were expecting Spotify to pull a rabbit out of the hat. They’d been promised an industry changing investment and had instead got an industry sustaining investment. Such fickle investor confidence so early on in the history of a public company can be fatal. So, Spotify quickly searched for that rabbit; it announced that it will do direct deals with some artists and managers. Guess what happened? Spotify’s stock price rose to $172.37. The rabbit was bounding across the stage. These are the new rules of streaming music. As the bellwether of streaming, Spotify has been dictating the narrative for years, but always with the focus of being a partner for rights holders. Now that it is public, Spotify has found that tough talking trumps sweet talking. Even if Spotify does not intend to go fast on its next gen-label strategy, it now knows it has to talk fast. Speaking from the experience of months of deep conversations with large institutional investors, Wall Street has pumped money into Spotify stock not because of how it will help labels’ businesses, but because they expect it to replace labels, or, at the very least, compete with them at scale. Spotify’s stock was not cheap, so to deliver to investors the returns they crave, it has to show that its influence is as disruptive / innovative (delete depending on your perspective) for the music business as Netflix has been for the TV business. They are investing in the potential upside on a future industry changer, not a present-day industry defender.

Spotify cannot of course go all guns blazing yet, as it simply cannot afford to operate without the major labels. Netflix could get away with what it did because the TV rights landscape is fragmented. Therefore, Spotify will have to tread carefully until it can pick away at major label market share through various forms of direct deals. But it also has to do this cautiously (as I explained in this post). If it is too quick and bold it will incite retaliatory action from the labels. So, the new rules of engagement for Spotify and rights holders are a bit like international diplomacy: make bold public statements to keep domestic voters happy but adopt a more conciliatory approach with partners behind closed doors. Let’s just hope that Spotify opts for the Justin Trudeau school of international diplomacy over the Donald Trump approach.