Spotify’s Loud and Clear is about fandom, not royalties 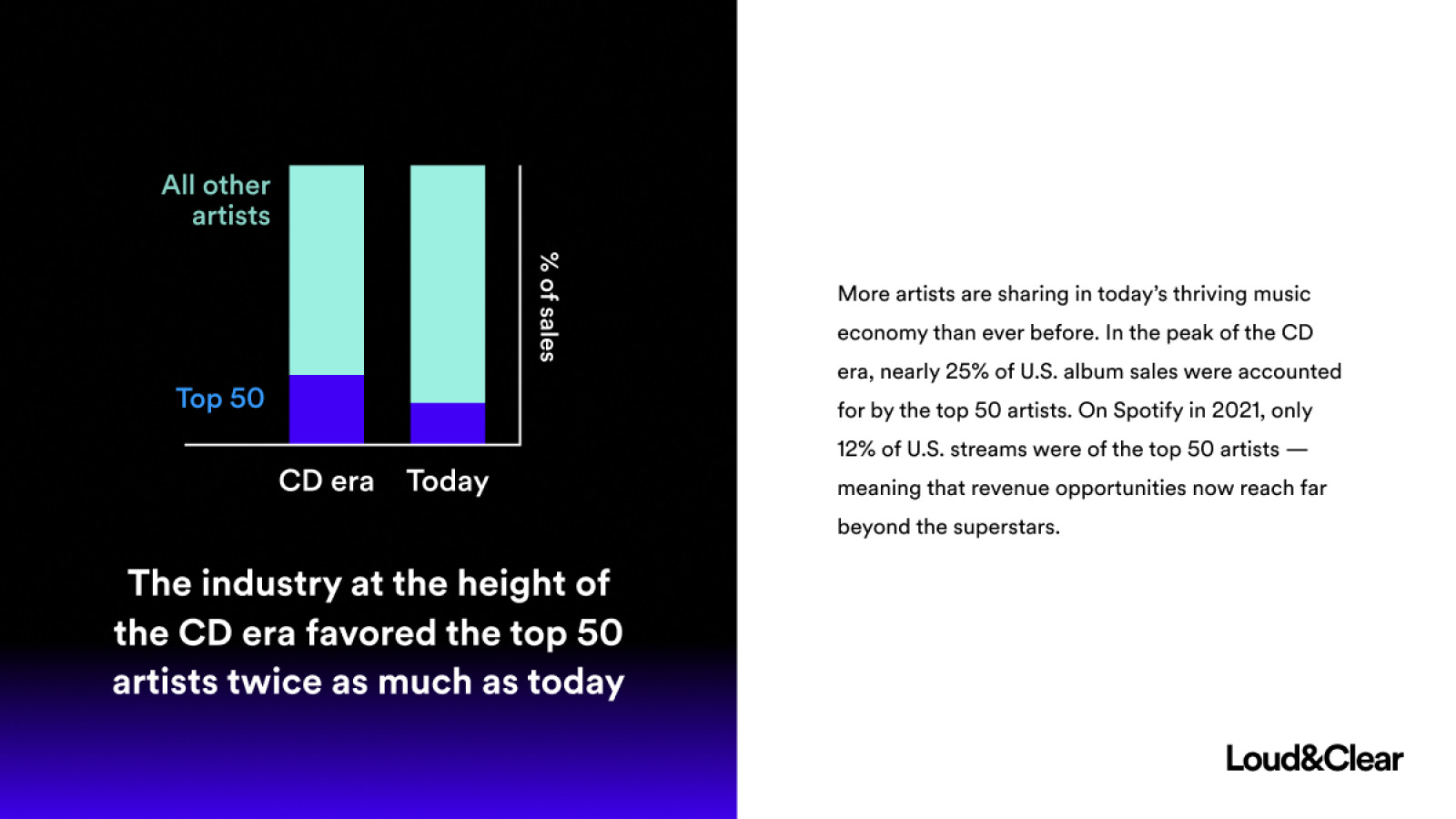 Spotify has updated its Loud & Clear website exploring how it pays royalties to rightsholders, and it claims that more artists are earning income on the platform than ever before. Many in the music industry will spend today picking apart these claims, and they will be right to do so. So long as streaming remains a game of scale and streamshare, the risk is that more artists sharing in revenue may mean less money for everyone, not more. Yet Spotify’s most important value for today’s creators may be hiding in plain sight. While remuneration remains an issue, the new Loud & Clear information reflects that Spotify is helping to drive the fragmentation of fandom, which will dilute superstars’ fandom monopoly and redistribute it to a longer tail of artists, delivering global-scale audiences to more of them. This is a valuable asset — even if many artists need to look elsewhere to make a living.

Spotify’s remuneration problem is a catch-22

Based on 2021 data, Loud & Clear claims that the number of artists who are hitting a range of annual revenue milestones ($1,000 to $5 million) doubled since 2017. This reflects that listening is becoming spread more evenly across artists, as opposed to being concentrated in a handful of superstars — although it should be clarified that these figures reflect payments before any labels / publishers take a cut.

However, knowing that Spotify operates under a streamshare model (for premium) — where rightsholder earnings are proportionate to their share of total streams — as the trend of fragmentation continues, it will not necessarily help more artists make a living.

Neither scenario is particularly helpful for solving the remuneration problem. To put it another way, if you are playing the lottery, is it better for one person to win $1 million, or for each of one million entrants to win $1? Plus, with new artists continuing to enter the market, there are (as Will Page puts it) ever more mouths to feed. This is not Spotify’s ‘fault’, but instead, a reflection of the streaming model where the royalty pool remains relatively constant in proportion to the number of subscribers, but not in relation to the number of artists.

The fundamental challenge for artists is now whether they can grow their share of revenue faster than new artists take their own. Cynically put, artists would be better off if the door was closed to new entrants — unless the remuneration model can be changed. Solutions such as fan-powered / user-centric royalties and artist subscriptions offer potential means of recalibrating the streaming system.

Fragmentation can be an asset

If we think of these numbers less in terms of mapping income and more in terms of mapping audience share, it becomes clear that Spotify is delivering on a separate promise: democratising the means of distribution. Perhaps more relevant than artist earnings statistics is Spotify’s finding that, while in the peak CD era, 25% of U.S. album sales were accounted for by the top 50 artists; on Spotify in 2021, only 12% of U.S. streams were for the top 50 artists.

Spotify has played a key role in the fragmentation of fandom by giving consumers choice over what they listen to, as well as personalised recommendations. Both factors drive listeners further into niches. This is an asset, not a challenge, since niche audiences typically deliver much higher engagement than passive, mass audiences. It is the same principle that drives Kevin Kelly’s 1,000 True Fans theory, which has enraptured the emerging creator economy.

The fragmentation of fandom can only exist with global-scale platforms like Spotify, which have a deep understanding of their audiences and an equally strong ability to use that understanding to target consumers. The ability to connect a niche artist, who may never get beyond their local bar circuit, with fans in other states and countries was part of Spotify’s pitch from the beginning.

There is, of course, more work to be done. Artists are currently facing what MIDiA terms “the paradox of small”: more artists can reach global audiences and drive sizable streaming metrics, but they have little or no realistic prospect of meaningful income. If Spotify can take its benefit of driving niche one step further by giving niche fans more ways to engage with music that they are fans of — such as social features or virtual fan badges available for purchase — it could potentially boost remuneration as well. Otherwise, it continues to make more sense for artists to use streaming to build an audience — but drive the biggest fans to platforms that offer better remuneration. Spotify is well-placed to build from its current position, but it will take work.

Epic Games, Bandcamp, and fandom for the ‘me’ generation

by Mark Mulligan
3 Mar 2022
Honestly, it has been a struggle to find the inspiration to write a blog post about the music industry, considering what is going on in the world at the moment. But along came this story, which is eye...

by Tatiana Cirisano
23 Feb 2022
Never one to follow tradition, Kanye West has announced that his next album, Donda 2 , will not be available on streaming services. Instead, he will release it exclusively on the Stem Player (a handheld...

Music artists are startups, and Silicon Valley is knocking

by Tatiana Cirisano
15 Feb 2022
Music artists are startups, and Silicon Valley is knocking With big-name catalogue sales at one end, and alternative music funding at the other, the music and finance businesses are increasingly intertwined....
No thanks