Guess Who Gen Z Prefers For Music: Spotify Or YouTube? 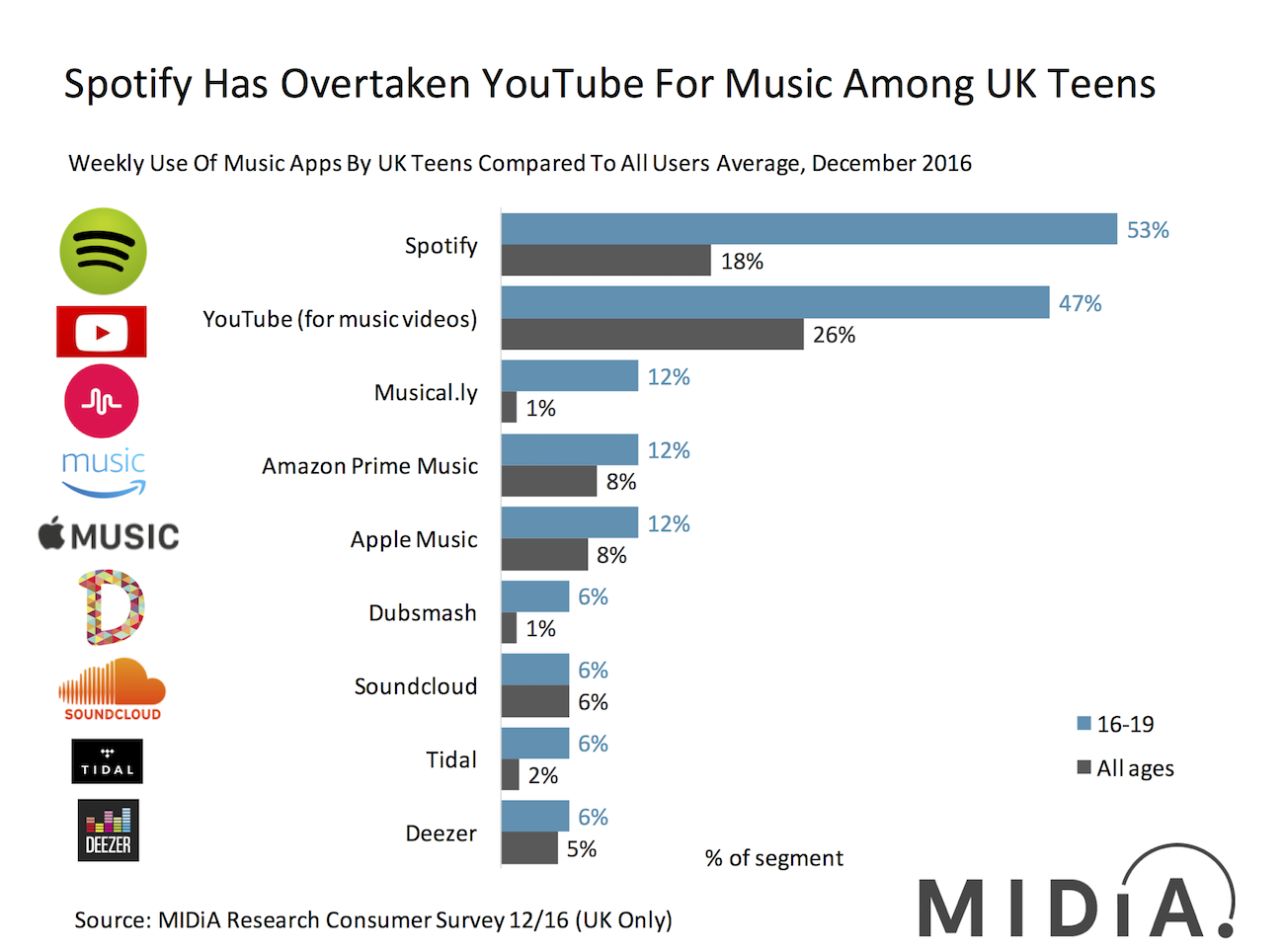 It is still common to hear people talk about Millennials as if it is one amorphous group. In actual fact, Millennials are now 2 entirely distinct generations, not 1. In addition to the core Millennials we now have a new generation of younger consumers born on or around 2000. This is Generation Z, the ‘true Millennials’ if you like. MIDiA recently deep dived into the behaviours and characteristics of this group in a piece of research for the BPI and ERA. In it we explored technology and media trends for 0-11 year olds, 12-15 year olds and 16-19 year olds. You can download the full report here. I’m going to deep dive into 1 key idea here: YouTube vs Spotify.

YouTube emerges as the dominant theme throughout all of the age groups of Gen Z, as both a social and an entertainment platform. And of course, as a music platform. Indeed, a staggering 94% of UK 16-19 year olds use YouTube monthly, even among 12-15 year olds the rate is 87%. But it is not just music that people are using YouTube for, indeed it is only by the time Gen Z gets to late teens that music becomes the most widely penetrated content watched on YouTube (to be clear, that is not the same as saying the most frequently watched or most time spent). YouTube is the world’s most widely used music app and its reach among younger audiences is clear to all. 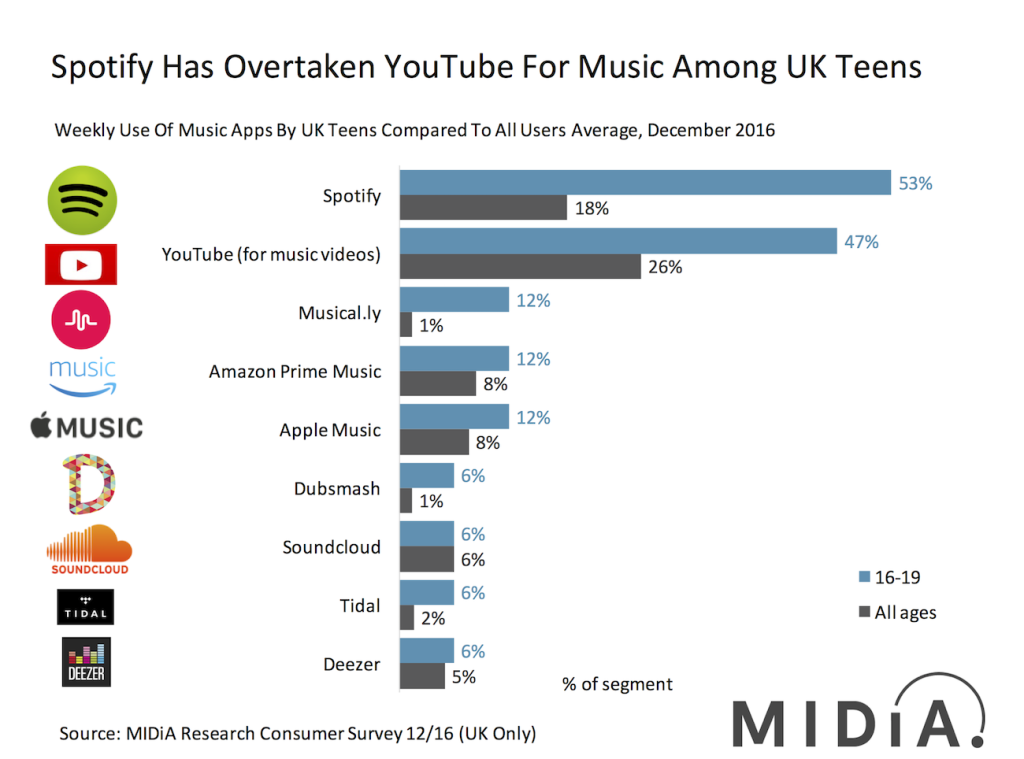 All of which makes the next finding all the more remarkable: Spotify has overtaken YouTube as the primary music app for 16-19 year olds in the UK. In December 2016, 53% of UK 16-19 year olds used Spotify weekly compared to 47% for YouTube. As the chart shows, no other streaming service, paid or free, comes anywhere close to Spotify and YouTube. Of the countries we surveyed in this piece of research (US, Canada, Australia and UK) it is only in the UK that Spotify is ahead of YouTube and, crucially, only in this age group.

So, what’s going on here? Spotify has become an aspirational brand for Gen Z. It has, for teens, become a byword for streaming in the same way the iPod became synonymous with the MP3s and Netflix has with streaming video. Spotify is not exactly an old brand but neither has it been a youth brand, instead prospering within its core demographic of 25-34 year olds. Now a new generation of youth, many of which were only just starting school when Spotify first launched, have seized the brand as their own.

I recall a meeting with the strategy team of one of the world’s biggest consumer electronic companies in the mid 2000s when the iPod was reaching its apogee. The team explained that they knew there was nothing they could do to compete with the iPod because it had become an aspirational brand, with an appeal so strong that it didn’t matter whether other products were better or cheaper, the iPod was the brand people wanted to be associated with. This company had done its homework and knew exactly how the trend was playing out because it had benefited from the exact same effect for the previous 2 decades.

Teens Have Made Spotify Their Own

It is hard to exaggerate the potential of this development. Teenagers have taken the Spotify brand and made it their own. Unless Spotify totally screws up somehow, which is unlikely, it has a platform for future growth that could make its current success simply look like the warm up act. Although the UK is the only one of the 4 markets in this study where Spotify has taken the lead, it is on track to do the same in the 3 other English speaking markets surveyed. And it has also taken the lead in other markets we track: Sweden (where national sentiment plays a major role) and Germany (where YouTube offers a much more restricted music range due to rights issues).

But there’s more… In a more recent survey in the UK that we fielded in March, the lead extended even further. Now 71% (yes, 71%!) of 16-19 year olds are using Spotify weekly, though YouTube is also up slightly to 52%. Our June survey is in the field now, so watch this space for an update on Spotify’s progress. It could potentially break the 80% mark.

Now to be clear, 71% of 16-19 year olds using Spotify weekly does not mean that anything like that share is actually paying for it. Most are streaming for free while some are on family plans and others are on the half-priced student plan. But even with that caveat, the scale of adoption is inarguable. While the music industry has been locked in an existential angst over the perceived YouTube ‘value gap’, Spotify has created the best possible riposte for rights holders and creators.

As Spotify edges towards its overdue public listing, it now has the evidence of foundations for truly sizeable future growth. The future is bright, bright green.